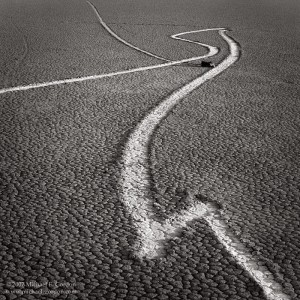 The desert drew modernists like Cady Wells and Dorr Bothwell, but also inspires more formal, almost old-fashioned (in a good way) interpretations. For a chance to see the latter, stop by the Long Beach El Dorado Nature Center Art Gallery for a show of Michael E. Gordon’s black-and-white photographs of the California desert.

Long Beach resident Gordon is a California native who has been obsessed with the state’s mountains and deserts his whole life. His deliberative photos—made with a 4”x5” view camera–range from Anza- Borrego to the  Mojave, Death Valley and Joshua Tree. He’s spent time at the Salton Sea, the Indio Hills, the Mecca Hills and Chuckwalla mountains.

Gordon says photographers tend to flock to the rim of the Grand Canyon or the Zion narrows for the “rather obvious and superficial beauty” found there.  “On the Mojave and Colorado deserts, there is comparatively little obvious beauty. From my perspective, these deserts are as beautiful as any other, and the challenge of photographing them in ways that has not been done before leads me further.” 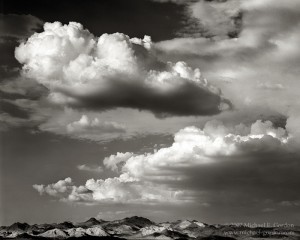 When he’s traveling the California deserts, Gordon almost never sees another artist at work. “Most of the time I feel like I could be walking alongside Joseph Smeaton Chase or John C. Van Dyke and being the first to discover and document these places through my art.”

The winner of many awards and veteran of many shows, Gordon has exhibited in the past at events all around the Coachella Valley. Look for him at the next arts festival near you, or up in a local canyon with his old-fashioned camera, just taking his time.

For more of his work, along with cards and prints, see: 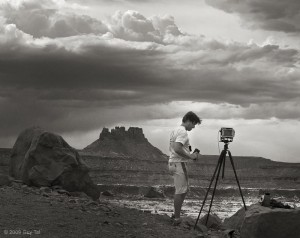