There is nothing like a train to accent the space and scale of the desert. The two go together just about as well as deserts and smoketrees. One man who knew this perhaps better than anyone was Richard Steinheimer, one of the world’s best railroad photographers. Now fans of trains, deserts and the towering (he was 6’6”), lovable “Stein” have a chance to see the photographer’s work at the Robert Mann Gallery in New York through January 21st, 2012. 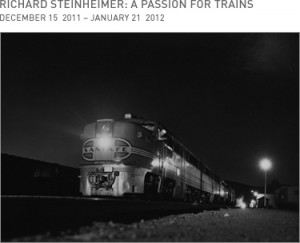 Steinheimer—known as “The Ansel Adams of Railroad Photography”–died in May of Alzheimer’s disease. His wife, Shirley Burman, says it was the desert that originally brought the couple together. On their first desert date, the two slept in Stein’s stripped down van in a small crater near Amboy. “It was 90 degrees at daybreak and I was beginning to doubt my sanity for traveling with this crazy person,” says Burman, who lives in Sacramento and is also a noted railroad photographer and historian. That date was followed by countless more trips in Stein’s van, chasing trains across the mountains and desert.

California Desert Art will have more soon on this legendary couple and their desert excursions. For now, you’ll have to go to New York if you want to see trains in their infinite moods, as only Steinheimer saw them.

Richard Steinheimer: A Passion for Trains