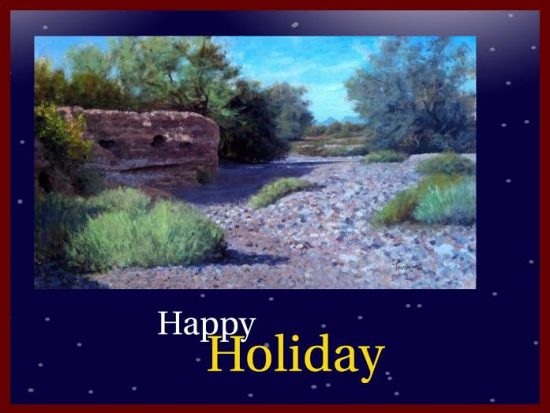 Artist and archaeologist Jim Toenjes sends holiday greetings “from way out Quartzsite way”. The former Palm Springs resident is now a nomadic artist,  traveling the deserts (with winters in Washington state) in a camper with his paints and his dog, Greta. Go see him if you pass through the gem and mineral hub–Quartzsite, Arizona–this winter. Jim writes: “Getting some painting done in prep for the annual Quartzsite Art League show in January, 2016. Attached is my card this year, with a painting from last week. It is 28 x 48 on plywood. Had to hike nearly a mile to the painting site, but fortunately only took two days. Have a Merry.”

Part-time Salton Sea resident and art dealer Allan Seymour has last-minute holiday gifts for desert art fans at his Classic Surf gallery in Capistrano. He’s featuring the work of Bill Ogden, a low-profile resident of Pinyon Pines, in the mountains above Palm Springs. 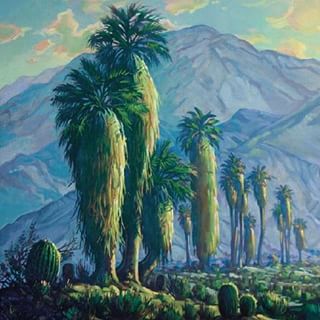 Ogden was a legendary surf artist of the 1960s and ’70s who later transfigured into a desert painter. We’ll be featuring more of his rollicking story on this website. In the meantime you can order the book  The Visionary Art of Bill Ogden (full of psychedelic cheer) or check out Allan’s rare Ogden paintings for sale.

Ethel Allen, wife of the late Desert Magazine mapmaker Norton Allen, passed away this summer in La Mesa, California. Norton was an avid avocational archaeologist who traveled the deserts in a specially outfitted van (his hips and spine were fused due to a rheumatic illness). Ethel, a potter and a former Brawley schoolteacher, became Norton’s partner in exploration and the cartographic arts.  Norton died in 1997. The couple embodied the best of the Desert Magazine ethos–a love for history, art and joyful roaming. For more on the pair: https://www.californiadesertart.com/?p=889 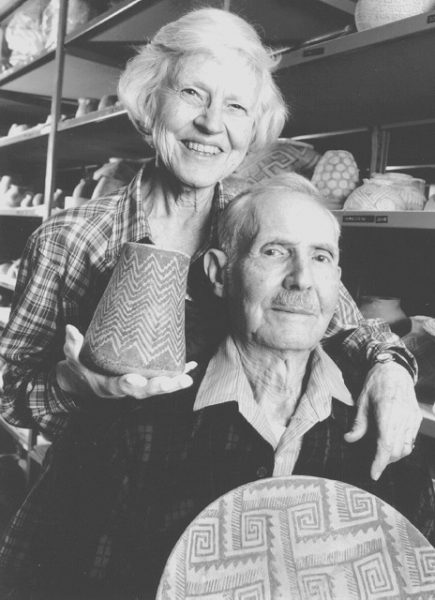 We mourn the passing of Salton Sea History Museum founder and director Jennie Kelly, who died of cancer in October. Jennie was an irrepressible force in desert history circles. She helped organize the 2011 inaugural exhibit of Salton Sea art, Valley of the Ancient Lake, curated by Deborah Martin. We’ll post more on Jennie, the future of the Salton Sea History Museum, and a planned memorial event in late January, 2016. 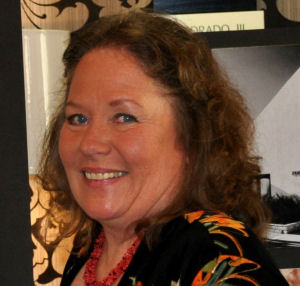 As a result of her article about George Frederick Gleich, Rebecca Akins has unearthed a prime Tahquitz Canyon painting that otherwise might have been lost to history. As Akins writes: I just got an email today from a lady who had gone to an estate auction in Bloomington, Indiana, and purchased four George Frederick artworks.  She said that George Frederick knew and visited the fellow whose estate was being auctioned.  There were apparently several Fredericks in the sale.

One of them I thought you’d find particularly interesting–a picture of Tahquitz Canyon with interesting scribbles on its back. 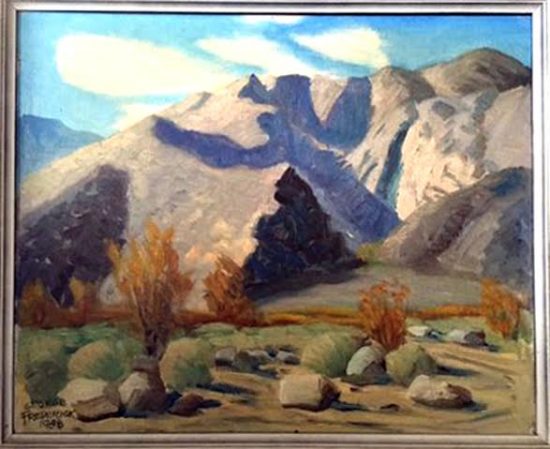 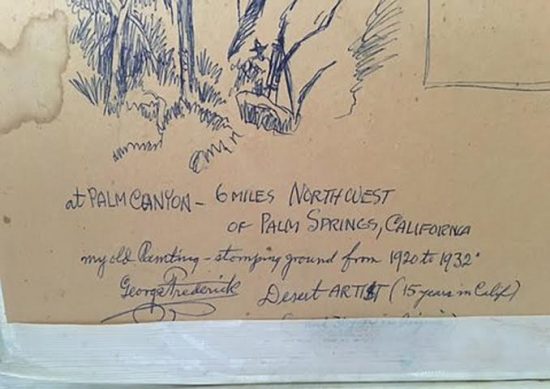 George apparently mixed up Palm Canyon and Tahquitz Canyon in his description.

Rebecca’s find is a good example of how an artist’s work starts to emerge from obscurity once someone takes the time to write about him or her. See her article here: https://www.californiadesertart.com/?p=2509

The former editor-in-chief of Palm Springs Life magazine, Steven Biller, has long been a champion of desert artists, both contemporary and historic. His new blog for the La Quinta Arts Foundation—Biller on Art–draws on insider knowledge of local artists, and includes morsels on desert Impressionism. In the post linked here, he writes about a 1940s Sam Hyde Harris painting excavated from the Palm Springs City Yard by Jennifer Henning, who manages the City’s public art program. Check back on Steven’s blog for news of arts in La Quinta and Valleywide.

Just in time for the holidays, Ron Backer sends his latest foray into desert historical painting: A bucolic view of South Palm Canyon Drive, before bloated  buildings and the Buzz bus.