A painting called simply “The Desert” is set to be auctioned at Sotheby’s in New York on May 12th, for an estimated $4-6 million. If it passes the $5.1 million mark, it will bring the highest amount ever paid for a painting by a Canadian artist.  The Saskatchewan-born artist Agnes Martin is linked to Cathedral City’s own Agnes Pelton via a groundbreaking 2009 show at the Orange County Museum of Art.  The exhibit, “Illumination”, featured four American women modernist artists (the other two were Georgia O’Keefe and Florence Miller Pierce) who were all inspired by the desert. 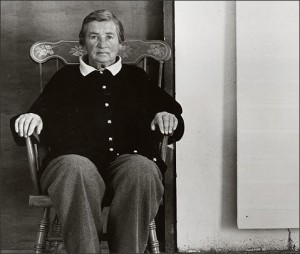 Martin lived in the New Mexico desert most of her life, but likely traveled in the California desert on her years-long camping sojourn in the 1960s. Her geometric paintings are far removed in appearance from the work of the Smoketree School, and in fact don’t resemble landscapes at all. “The Desert” is an extremely pale painting full of lines and grids so faint they won’t reproduce in a photo.

Martin’s work has been called austere, monastic and minimalist (though she doesn’t claim the style). She lived alone in an adobe house on a remote mesa in Cuba, New Mexico, dying at age 92 in 2004 in Taos. As a younger woman, she had extreme reactions to stress that at times caused her to go into catatonic states. She once said in an interview that what she was aiming for in her work was “an untroubled mind”.