Desert painter Eric Merrell will give a talk on the California Art Club in the 1940s  on Sunday, October 24, from 1-3 pm, in Pasadena. Eric completed an artist’s residency at Joshua Tree National Park in 2009, and is one of the few contemporary desert artists to have a recent show of desert work in New York (at the Forbes Gallery).

He has an abiding interest in California art history and has contributed to a forthcoming book on the centennial of the California Art Club. (To preorder the book, due out in 2011, see the CAC website below). The World War II years were a tumultuous time for the club, he says. He’ll talk about how activities in the Club paralleled the rise of modern art in LA. The talk should be of interest to desert art fans because many of the early members—Sam Hyde Harris, Alson Clark, Paul Lauritz, Hanson Puthuff, Benjamin Brown and Jean Mannheim—painted the desert. The Club, which remains vibrant today, has been a major force in the growth of California Impressionism. 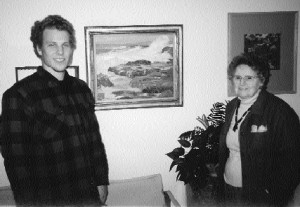 As a young man (not long ago!) Eric Merrell interviewed Evelyn Payne Hatcher, daughter of Edgar and Elsie Payne.

“In the Trenches: The California Art Club during the 1940s”
Lecture by CAC Historian Eric Merrell