The heroes of early desert photography recognized that a time and place was passing long before anyone else came to the same conclusion. They had a way of seeing what would be missed. Mecca postmaster Susie Smith, for instance, documented the camps of workers building the Colorado River Aqueduct in the 1930s. Richard Steinheimer captured the now-extinct railroad shanties beside the Salton Sea. These photographers were “hyperlocal” before hyperlocal was a buzzword. 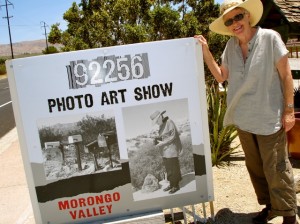 Cheryl Jordan in front of the Cactus Mart

Now, in the tradition of the early documentarians, photographer Cheryl Jordan explores the impermanence of Morongo Valley lifestyles in the “92256” exhibit at the Cactus Mart on Highway 62 in Morongo.

Morongo is a little burg of about 4,000 horsemen and women, hippies, artists and working people just up the hill from Palm Springs and en route to Joshua Tree. It’s a bowl about 12 miles long by three miles wide, completely ringed by mountains and graced by a busy wildlife corridor.

As you drive through Morongo, to your right you’ll see the nursery Cactus Mart, also home to the Purple Agave gallery. While this stop is not routine for most Coachella Valley art fans, it should be. The owner Leslie Rotstein (along with her husband, Gene) is a true patron and supporter of artists. Really the 92256 exhibit is a collaboration between muse (Leslie) and photographer (Cheryl).

Cheryl Jordan was a high school counselor in Fontana and also taught at the University of Redlands before moving to a shingled dome in Morongo with her husband, Craig, in 2003. She’d taken up photography just a few years before. At a book group she met Leslie Rotstein. Rotstein originally migrated “kicking and screaming” from Manhattan Beach but after 27 years she’d come to love the “time warp” feeling of Morongo. Where else would you see parents dropping off kids at school on horseback?

The 92256 project started with a slur. Rotstein’s granddaughter, Sarah Scheideman, frequents the Coachella Valley arts scene (see her blog http://thecoachellavalleyartscene.blogspot.com/) and once made a disparaging comment about Morongo. Something to the effect of: How could they even exist out there without the Ace Hotel and the Coachella Festival? That’s when Rotstein realized how much she loved her rural home and how much of the lifestyle was about to fade: “This needs to be captured before it disappears,” she said.

She decided what was needed was a black-and-white photo project, documenting the 92256 zip-code in the manner of Dorothea Lange and other great photojournalists. 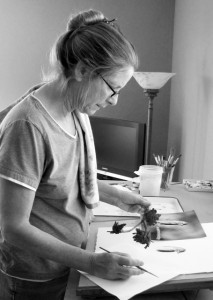 She thought instantly of Cheryl Jordan, who had shown her work previously at the gallery. Inspired by the independence of Georgia O’Keeffe and the portraiture of Annie Leibovitz, Jordan set out in search of iconic Morongo scenes and people—rural mailboxes, rusted cars, dirt lanes, horses and horse rescuers and free-spirits.

Jordan was unsure how to proceed at first. But then she decided she’d just spend time around her subjects until a picture emerged. “Leslie pushed me to do more, do different,” she says of Rotstein “She’s been my champion from the get-go.”

The exhibit that resulted from the collaboration will help define Morongo for years to come, and will make city slickers and Coachella-goers look again at the humble 92256. 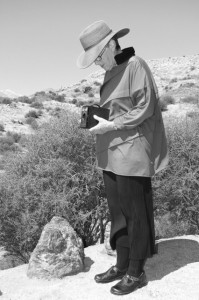