Sally Ward, an artist who lived for decades in Palm Springs, died in Tucson on November 16, 2010, at age 101. Fellow artists from Ward’s circle of friends who also passed away recently include Louise Tennyson and Edna Hollinger. All were part of a roving bunch of plein air painters from the Palm Springs Desert Art Center. 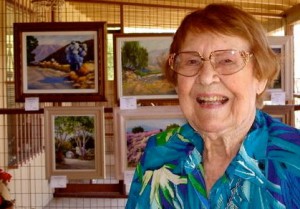 They explored the canyons together and benefited from acquaintance with older, experienced landscape painters such as Wilton McCoy, Darwin Duncan and Karl Albert.

Sally Ward was born in Montana and moved to Palm Springs in 1973. Like her friends, Sally was serious about her work, and was always trying to improve even after moving to a Tucson nursing home. Here’s an excerpt from a faxed note she wrote to fellow painter Tennyson when Ward was 98. The younger Tennyson was in a painting slump; and Ward here tries to cheer her on.

“I am starting again to paint on a 20×30 linen that just doesn’t want to be satisfied. Everytime I put another painting on it I scrape it off again. It’s been a bigger disaster everytime. This time I’m using a photo of Andreas Canyon that has trees on both sides and a shady lane down the middle. I did this one in a 9×12 and it was so good I want to ask this 20×30 to be patient enough to let it happen…

I try everything to get it right. But that’s what it takes. If something doesn’t work you have to try something else. I will fax this now and try to be your inspiration.”

Ward’s family requests that the painter’s friends and fans donate to art programs in local schools and do all they can to encourage young artists. For information on Sally Ward’s work, contact her daughter Sue Ward at saward1@juno.com 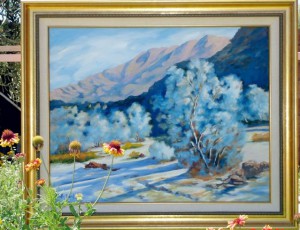 ← Cheryl Jordan: Seeking the Heart of the 92256
Indian Wells Destroys a Cherished Link to California Art →