Long Beach photographer Michael E. Gordon is a champion of overlooked deserts, preferring the quiet corners of the Mojave to the more obvious drama of places like the Grand Canyon. Now he takes on a similarly ignored and yet most deserving desert resident–the Joshua tree–in an exhibit opening November 5, 2011, at the historic Kelso Depot in Mojave National Preserve. 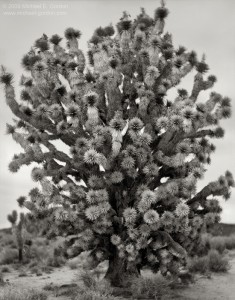 While spending time amongst the trees Gordon says he began to realize each was as “wholly distinct as humans. Each specimen seems infused with individual form, character and stories.” The tree was named by Mormon settlers who noted the prayerful quality of the outstretched arms. The largest Joshua tree forest known to exist is in Mojave Preserve, where Gordon did much of his work.

The fine art landscape photographer uses a large format view camera to capture his serene yet commanding black-and-white portraits. As Joshua tree populations dwindle due to climate change, Gordon’s photographs may one day stand as reminders of a vanished herd. 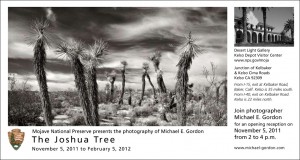 Kudos to the Kelso Depot gallery for consistently featuring relevant “deep desert” exhibits. And kudos to Michael Gordon for combining an active exploration of the desert with a dedication to preserving the places, plants and animals he finds.

November 5, 2011 through February 5, 2012, Desert Light Gallery at the Kelso Depot Visitor Center. Come to the opening on November 5, from 2-4 pm, and meet the photographer

For more on Michael Gordon:

For information on the Kelso Depot: