My new culture heroes are painters who defy the art school injunction against old-fashioned landscape painting and simply walk outside with a paintbrush.  You can meet one such rebel, Patricia Schaefer, tonight (Friday, April 27, 2012) at the opening of her exhibit at Korakia Pensione in Palm Springs. 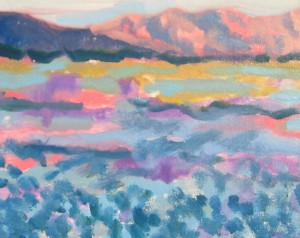 Schaefer was previously known for her scenes of lawnmowers, motel pools and other modernist symbols of urban discontent. But hanging around the desert and hiking its trails made her want to sample an older way.

When she first wandered out to try plein air painting she faced a considerable frustration curve. Her instructor, well-known Southern California painter Mark Kerckhoff, jokes that she showed up for his workshop looking like an urban hipster in a “ballerina tutu top.”  For Patricia, used to working in a roomy studio, the plein-air canvases seemed so small and easily overlooked. Her palette blew around in the wind. It was too hot, of course, and the infernal light kept changing every minute. 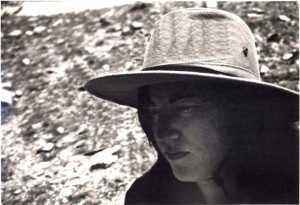 She couldn’t figure out what her teacher was staring at so intently for all those hours on the rocks. “It’s a wasteland. It’s 100 degrees,” she says. “I’m rushing. I’m desperate to get this down before everything changes again.”

After many squirmy hours, she began to see that “slowness of the eye” is the whole point of painting plein air landscapes. She started to notice “the forces that shape the landscape” (echoes of Agnes Pelton here), and got into the metaphysics of botany. “The force and direction of a plant really shapes how you paint it. It’s not just a fuzzball,” she says. 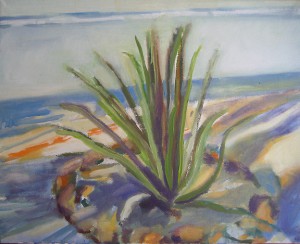 The bigness and boldness she learned in art school was soon left behind in favor of humility, smallness and slowness. Just as David Hockney is reviving landscape art in Britain with his recent Royal Academy show, A Bigger Picture,  culture heroes like Patricia Schaefer are making desert landscapes hip again.

“She flies,” Kerckhoff says of her work. “She picks up on these things in the desert people haven’t seen before. I think she’s got a lot of desert soul.”

Schaefer grew up in the leafy landscape of Lakewood, Ohio. As an MFA student at the San Francisco Art Institute, she inherited a clear bias toward high concept art. “I was never intentionally a landscape painter,” she says. 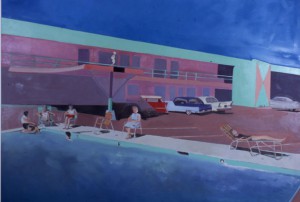 A skilled painter, she easily met the modernist standard in her images of lost utopias and people on the edge. At the same time, about ten years ago she began visiting Palm Springs and staying at the Korakia Pensione—the former home of artist Gordon Coutts. This desert immersion advanced her art education way beyond the academy.

At first she traded paintings for stays at the Korakia, and eventually was invited to be an artist-in-residence at the stylish Palm Springs Inn. Coutts, a Scottish painter, built the Moroccan-style villa in 1924 to remind him of his younger days in Tangier. Legend has it painters such as Agnes Pelton and Nicolai Fechin were visitors here, along with “American Gothic” artist Grant Wood and amateur painter Winston Churchill, who motivated so many beginning artists with his book Painting as a Pastime.

While staying for long stretches at the Korakia, Patricia took up hiking on the desert trails close to the Inn. She was initiated as a bonafide desert adventurer the time she sprained her ankle while hiking and crawled back to the tram station after dark by the light of her cell phone. 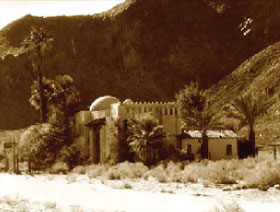 It was Paulette Monarrez, general manager at Korakia, who first suggested Patricia paint the local landscape. The Inn occasionally offers artists residency programs, displaying their works in the same gallery where Coutts showed his paintings in the 1920s. At first Patricia tried to encapsulate the land in art school tropes but finally just gave up and headed out onto the Lykken trail with a brush and canvas. Painting Lily Rock, Snow Creek and the Indian Canyons, she says: “I really started to feel there is nobility about landscape painting, a sincerity missing from contemporary work.”

Patricia still loves abstract artists such as Frankenthaler, Diebenkorn and Twombly and yet says she’s attracted to 19th century landscapes and doesn’t like modern Palm Springs as much as the Gordon Coutts era.  “I like things that are hidden and old-fashioned and ‘out there’ and small.”

The mix of modern and vintage, theoretical and instinctive makes for an unusual style–Mark Kerckhoff calls it “abstract realism.” Schaefer is unusual in her multiple careers, as well. In addition to being an artist and art teacher, she is an intellectual property attorney and a novelist with an MA from Columbia University in comparative literature. She’s working on a crime novel set in Palm Springs (it’s called Heat) about a character obsessed with the past. She’s also illustrating a children’s book written by her sister.

“I see Patricia’s work as inherently place-based—like good films that paint the location as a character. Her tie with landscape is deeply psychological and almost literary,” says her sister, Caroline Schaefer-Hills, an art professor in Michigan. 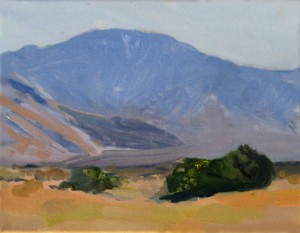 Ceaselessly thoughtful, Schaefer is currently thinking about what makes a desert painting relevant. Or: When is a painting of  verbena more than just another painting of verbena?  She tells her students: “If you don’t channel something that’s deep and real and important to you, your work is empty and it shows.”

Just as Hemingway’s river was not really about the river, desert painting is not about verbena. “It’s really not about the mountain. It’s not about the sand,” Patricia says with the authority of someone who has found her way home by cell phone light.

For more on Patricia Schaefer: 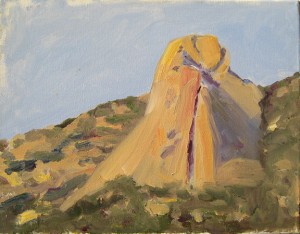