In desert art circles, the name Kevin Stewart equals respectability. The art appraiser and dealer is known for his impeccably pressed pinstripe shirts and his encyclopedic knowledge of desert art. You could take the man anywhere. 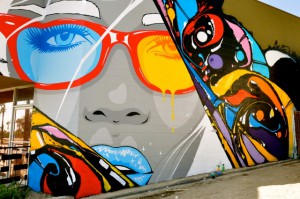 So what was he doing out in front of his Palm Springs gallery on Friday, with hip-hop music blaring, urban youth milling about, and a long-haired young man on a ladder spray-painting a woman’s face on the side of his building?

In a clattering collision of universes, Kevin Stewart–the dean of desert art dealers—has just become the father of Palm Springs Street Art. A form of underground public art evolved from graffiti, Street Art has exploded in urban centers and even rated its own show at the Museum of Contemporary Art in LA last year. But there’s been no action in the Coachella Valley and this industrial-looking stretch of North Palm Canyon had never seen a spray can. Till now.

Not much had been going on at the Stewarts’ building since they recently opened a new gallery in Santa Barbara. Then Kevin’s wife, Diane, alerted me by e-mail the other day that I might want to check out the progress on their new mural. 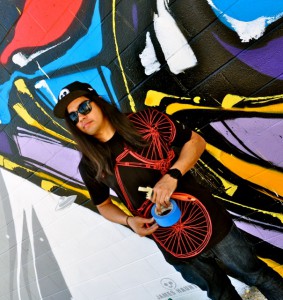 I parked at the 7-11 at North Palm Canyon and Racquet Club and walked around the corner to find a cherry picker parked in front of the gallery. The side of the building was nearly covered by dark, edgy swaths of paint. Kevin and Diane’s 20-year-old son, Jeff, was out front wearing a T-shirt designed by artist James Haunt, the same man who was currently standing on the ladder above us.

Haunt dropped an empty spray can that clattered to the sidewalk; we all jumped back. When passer-by spotted the artists, they honked their horns happily—no doubt overjoyed to see urban street action amidst the numbing expanse of country clubs.

The mural is a byproduct of the Coachella Valley Arts and Music Festival, starting next weekend (April 13, 2012). The artists painting Kevin’s building had done gigs at Coachella in the past and this year wanted to find a wall to paint. 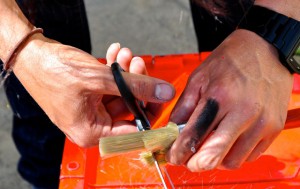 James Haunt and friends were looking for a likely site one day, with Palm Springs art collector Chris Cowper in tow. As they drove by the corner of Palm Canyon and Racquet Club, Chris saw the angled wall of the Stewarts’ building and decided to phone Kevin, a friend who had appraised his art in the past. He didn’t really think the traditional art dealer would jump at the chance to have his building splattered with glorified gangster graffiti.

Kevin told Chris he’d think about it and call him back. ”I thought about it for about three minutes before I said OK,” Kevin told me. “I said: ‘Palm Springs needs this’”

Kevin was worried his wife Diane might not agree, so he didn’t bring it up until the painters were already at work. The team set up in the middle-of-the night, and were questioned about their unusual operation by the police.

The crew assured police the building owner was on board. As it turned out, both building owners were on-board: Diane, too, was delighted with the idea. 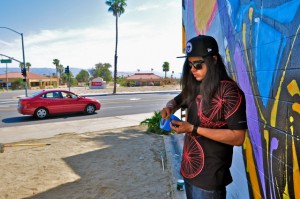 As I talked to Kevin out in front of his building, watching the artists at work, he was as enthused as I’d ever seen him. In fact he said he hadn’t been as jazzed since he joined the Love-Ins in San Francisco during the hippie era. “Art is about reaction. This is something that’s surprising,” he said. “These guys have so much inside them that they want to express. Their art is big.”

Kevin has no plans of abandoning California Impressionism in favor of Street Art. Well, maybe just for today. “We’re going to open some minds,” he said. “This art can get your mind going.”

The artists were equally jazzed–by being the first in Palm Springs and by the size and visibility of the wall. “Hey this is a monster wall,” said crew member Justin Glikman.

While Street Art may be getting more mainstream in recent years (thanks in part to Keith Haring and Shepard Fairey) it remains unsanctioned. No one had a permit in their pocket, so as we stood on the corner we all kept looking over our shoulders for a City inspector who might show up and object.

Even if they did, “It’s up. We’re there,” Justin said with relief.

The Stewarts’ mural is a collaboration between James Haunt, known for his signature California dream girl design, and Zes MSK who has a more abstract style. James arrived fresh from painting the first-ever Street Art mural at the Roxy in LA.

On a break from the ladder, the artist told me he’s hardly ever visited the Palm Springs area, except for the Coachella Festival, but during this visit he went hiking in the Indian Canyons. “It’s growing on me,” he said. Street, meet desert. Desert, meet Street. 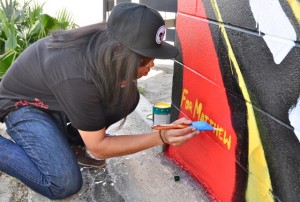 When in Santa Barbara, be sure and visit the Stewarts’ new gallery:

← The Artist as Collector: A Tour of the Lou Armentrout and Mick Welch Collection
Patricia Schaefer: Modern Desert Soul →