To be an abstract artist in LA in the 1980s was the next best thing to being lead singer in a punk band. You lived in a downtown LA loft and partied with celebrities.  Hard-edge artist Penelope Krebs enjoyed the perks of the scene for nearly 20 years until the death of her husband, fellow artist William Dwyer, in 2004. 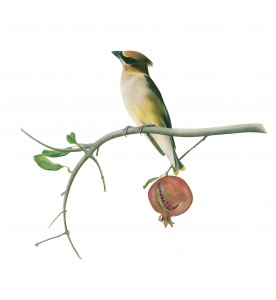 Then Krebs stopped painting her huge geometric canvases. The magic of all those lines and colors–the magic of the parties–was gone for her. Someone told her there were artists living near Joshua Tree National Park and she thought maybe she could start again there.

As we know, plenty of LA artists have moved to Joshua Tree in recent years. The path from city to country is not unique. But what happened next for Krebs was more than anyone could have predicted–especially the artist herself. 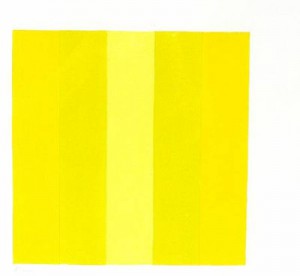 When she moved into a renovated Morongo homestead in 2005, she wasn’t painting; and her work doing research for lawyers had slowed due to the recession. Krebs sat outside a lot and worried. That’s when she began to notice the birds. Krebs unknowingly had moved to a major stopover on the Pacific Flyway, with more than 250 species of resident and tourist birds for neighbors.

Throughout time, of course, birds have claimed the attention of artists. From Hieronymus Bosch to John James Audubon, many people have painted birds. (For more on ornithological art, see the Birds in Art show at the Wildling Museum in Los Olivos through January 2, 2011.)

The Morongo birds had Krebs’ attention, alright, but she was uneasy painting them because of the anti-realism bias common to abstract painters. Painting a bird that looked like a bird seemed vaguely quaint, like crocheting. What would Bill (her late husband) have thought if she started painting house finches? 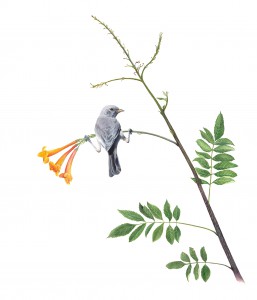 But paint a finch she did, and one finch led to another. Soon she was hanging up feeders and adding bird-friendly plants to the desert landscaping around her house.

The painter once known for huge abstract bands of color began to sell paintings of orioles and grosbeaks. Her abstract artist friends from LA were having a hard time selling work, but the birds were flying out the door. Krebs was even invited to paint a honeycreeper for the Smithsonian’s “Darwin’s 100th Birthday” celebration.

At a recent show at the Lincart Gallery in San Francisco, the bird paintings sold out. A reviewer on the website ArtBusiness.com wrote: “I don’t know about you, but to me $2200 isn’t exactly chump change….But it’s a non-issue—all the birds are sold, and deservedly so. Chew on this: Who would have thought vanguard San Francisco artsters would ever embrace wildlife art?” 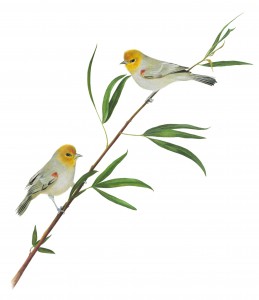 Krebs’ champion in the transition from abstract to representational has been her sister, Pamela Carroll, a realist painter from Carmel. When the two were little they painted birds together with no thought of whether it was cool. But then Krebs went off to study abstract art at the UCSB College of Creative Studies with teachers John McCracken and James Hayward.

Krebs later showed her hard-edged abstract work extensively in the LA area and was reviewed in the LA Times, Art in America and many other publications. Decades later, it was her sister who encouraged her to return to hummingbirds and sparrows. (The sisters’ grandmother, Alma Carmody, was a landscape painter in 29 Palms, so there may have been some inspiration in the gene pool, as well.)

On a recent morning, Krebs’ yard was alive with quail, roadrunners, doves and a monster jackrabbit nibbling cactus. The artist opens all her windows and listens to bird chatter while painting; her work table is positioned in front of multiple feeders. To soak in even more birds, she goes hiking every morning in Morongo Preserve with her black lab, Pip, and looks for migrant species flitting in and out of the cottonwoods. “I don’t consider myself a birder,” she says. “I don’t know birds that well.” 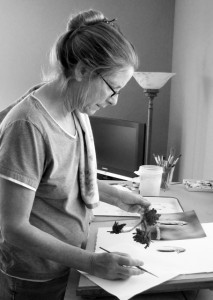 It’s the physical act of painting she loves, the layer upon layer upon layer of tiny strokes it takes to capture a thrasher’s wing. This style of bird painting calls on the same attention to formality and precision as her earlier abstract work.

Surrounded by birds living and painted, Krebs is still somewhat unclear where all of this is leading. “I’m on a journey and I’m hoping the birds will take me to another place.”

Whatever the future holds for her art, she does know one thing: “The birds saved my life.”

For more on Penelope Krebs, or to order paintings, cards or prints, see her website: http://penelopekrebs.com

You can meet Krebs at La Quinta’s Art Under the Umbrellas, November 6, or at the Stevens Park art festivals and the Palm Springs Arts Festival January 21-23, as well as other events around the Coachella Valley. 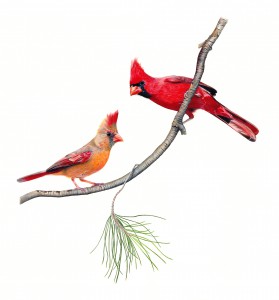 26 comments for “Penelope Krebs: From LA Hard-Edge to Ornithological Art”