I arrived at an estate sale in the Cathedral City Cove not long ago to find what looked like a line of leaf-cutter ants carrying away oversized objects. People balanced huge picture frames on their shoulders, floated them along like sails and strapped them to car roofs. The leaf-litter was the accumulated life’s work of artist Val Samuelson, a Cove dweller for 37 years. 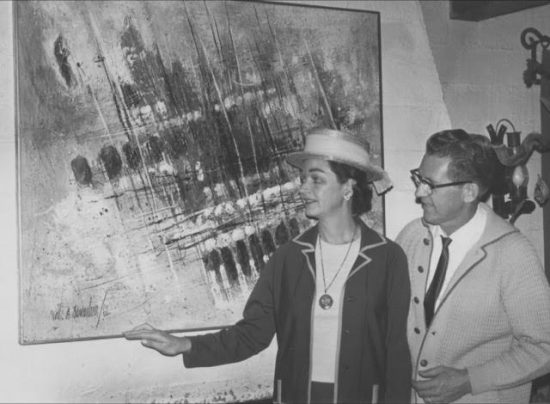 Today, not long after that inglorious event, Samuelson’s reputation is on the rise as the Cathedral City Public Arts Commission has launched an exhibit devoted to the longtime resident who died in 2000. Known for his realistic desert scenes and freewheeling abstracts, Samuelson worked as staff artist in the early days of the Palm Springs Art Museum, and was art director of the stylish Villager Magazine, a precursor to Palm Springs Life. 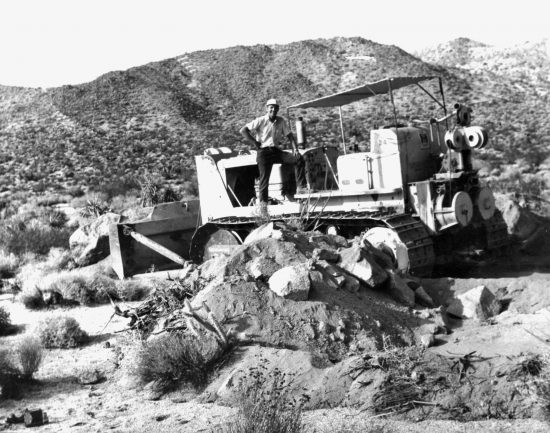 But the fact that most endears him to me is this: He built the Dunn Road. Those of you who’ve lived in the Coachella Valley for some time know the Dunn Road is our own highway to nowhere. A dirt road bulldozed out of wilderness, it descends 15 miles from Highway 74 in the mountains to the desert floor in Cathedral City.

Mike Dunn, a burly WWII vet with PTSD, was half of the team. The other was the catskinner artist Samuelson, who—for years–worked eight hours a day driving a 50 ton caterpillar up in the mountains, coming home to paint by the strains of classical music each night. The project was meant to launch a new development. That never happened but the Dunn Road still stands, a monument to its tenacious builders. 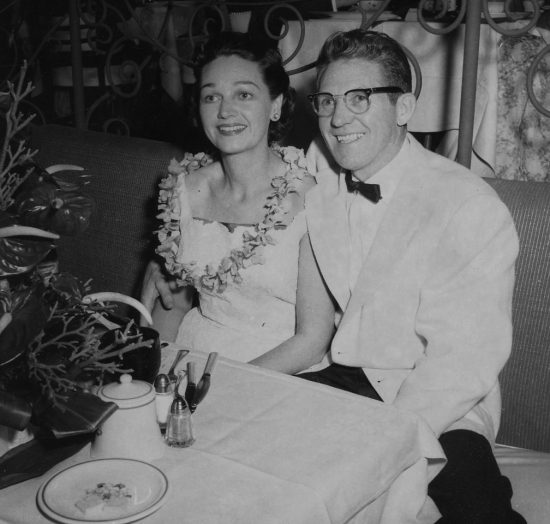 The first time I met Samuelson’s widow, Marian, it was to apologize for an article I’d written about the Dunn Road. I knew I’d upset her with my characterization of the road as folly (environmentalists hate the road as it encroaches on bighorn sheep range). In defending the project, Marian was defending her late husband, just as she had fought for him and his art their entire marriage. Val was never ambitious; Marian carried him with her own dreams of success.

Now 90, Marian lives in an assisted living center in Cathedral City, with a couple of Val’s watercolors decorating her walls. Soon after the estate sale, I talked to her about Val and his artwork.

He was born February 27, 1913 in Barrett, Minnesota, and studied at the Minnesota School of Art and the Institute of Fine Arts. By the time he surfaced in Palm Springs in 1953, (after working as a sign painter in Minnesota and as art director for two advertising agencies in LA), he had eye problems and had endured several years of complete blindness. He healed himself, to a degree, with eye exercises and hypnosis–a lifelong interest.

In his diverse career, he worked as a professional photographer, a cartoonist, a children’s book illustrator and a board game designer. He starred in the Art in Action show for Palm Springs’ TV station KMIR.  As well as teaching many fledgling painters in private classes, Samuelson was one of the dreamers behind the Idyllwild Arts Academy, the influential school on the hill. 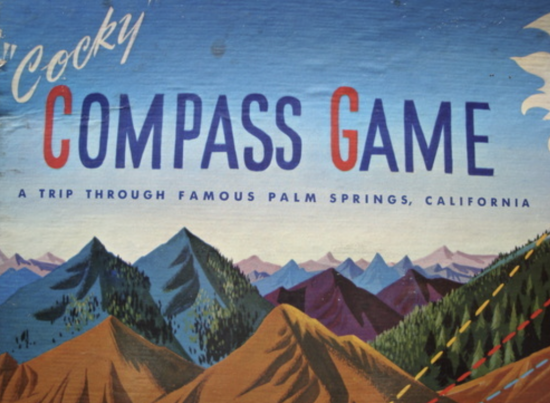 A Palm Springs board game designed by Val Samuelson. 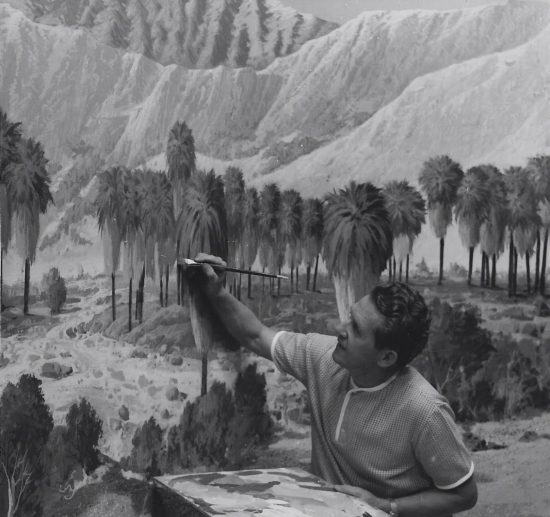 Of Val’s years at the Palm Springs Art Museum, chief curator Katherine Hough remembers: “He worked part time at the old museum—painting the dioramas and title wall signs for the old building before we moved to Museum Drive. He also did some painting of title wall signs when we first opened on Museum Drive in the early 1970s.”

There was not much abstract art action in Palm Springs at the time, so some have guessed it was Val’s brush with blindness that made him look outside the usual parameters of landscape painting. We don’t know if he met Agnes Pelton, the renowned modernist who also lived in the Cathedral City cove. The two would have had much to talk about, as both were consumed with the space between realism and abstraction.

In 1960, Samuelson married Marian Gibbs. Born in Laramie, Wyoming, Marian had an art degree from the University of Wyoming and was working in Palm Springs as secretary to the late Palm Springs mayor Frank Bogert–then editor of the Villager. Pretty and assertive, Marian was an asset to Val’s social life. Samuelson was soon showing up in society photos with Jonas Salk and his wife, the painter Francoise Gilot. Collectors of his art included society names Steven Chase, Palm Desert founder Cliff Henderson, the actor David Janssen, Chester “Cactus Slim” Moorten and Charles Shelton (Desert Magazine editor).

Marian emphasized that Palm Springs was a small pond in the 1960s: “You can’t imagine how small Palm Springs was then. Val did a lot of easel painting in the studio. He would teach at the country clubs. He taught everything. You couldn’t put your finger on any one thing.” 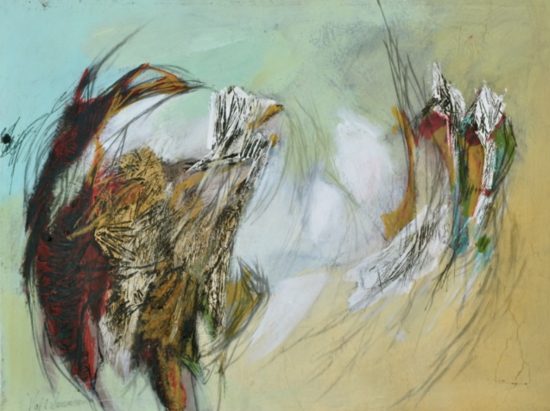 The “not any one thing” approach worked for him. He had five consecutive annual shows at the Desert Southwest Gallery (home of Desert Magazine) in Palm Desert, a one-man show at the Riverside County Museum and a Palm Springs Art Museum retrospective in 1966.  At the time, director Frederick Sleight described Val’s work as “romantic abstractionist.”

After Samuelson started work on the Dunn road in the 1970s, he began to incorporate building material into his paintings: liquid plastics, Styrofoam aggregate, ground-up plaster.

It was during this era that Indio artist Glenda Nordmeyer met Samuelson at a sidewalk show at the Palm Springs Plaza. She says of the paintings on display: “There were hard shadows, brilliant colors and big sprawling dunes. I didn’t like desert landscapes, but his were so dynamic and new.” 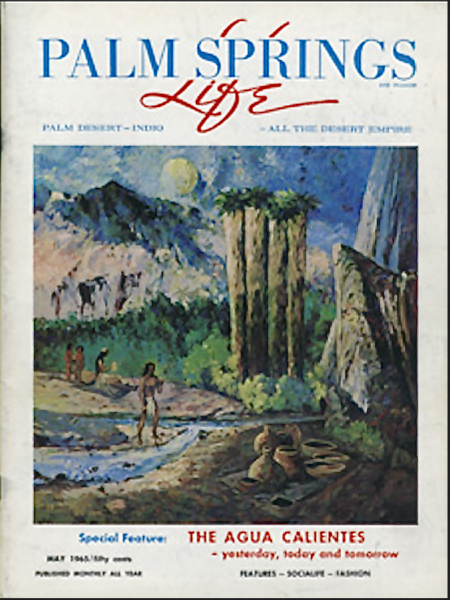 Nordmeyer became Val’s student, taking classes in a little cinder block house tucked in an old date grove at Deep Canyon and Fred Waring in Palm Desert. She says he spent most of his time trying to free her from artistic inhibitions. “Don’t worry about the color being too true to what others might see,” he said. “Just go.”

She adds: “The last time I saw his work he had moved on to abstract. He told me he had found a wonderful vitamin that was improving his eyesight.” The brilliant colors Glenda describes later gave way to subdued desert tones as Val’s eyesight faded.

As his vision was changing, Val took more inspiration from music, says Marilyn Cooper, an art historian and chair of the Cathedral City Public Arts Commission. He listened to cassette tapes of symphonies as he worked; and he named some of  his paintings for musical pieces. Mozart Symphony #3 appears in the current Cathedral City exhibit.

If you go to the second floor of City Hall (the exhibit is on the first) you can also see “Arroyo”, a 10-foot desert landscape Marian Samuelson donated to Cathedral City in 2000. Cooper points out that Samuelson tweaks the traditional desert landscape formula here by hiding several reclining nudes amidst the desert scrub.

“Each painting is different,” Cooper says. “He’s not creating a signature style at all. It’s like he’s always experimenting. Maybe it’s his way of freeing himself.” Freeing himself and others seems to have been the ticket for Samuelson. As he told Glenda Nordmeyer: “Just go”.

The Cathedral City Public Arts Commission presents an exhibit of Val Samuelson’s paintings in the City Hall lobby gallery. The work is on view through April, 2013, with an opening reception on October 8, 2012. For information: (760) 770-0340. 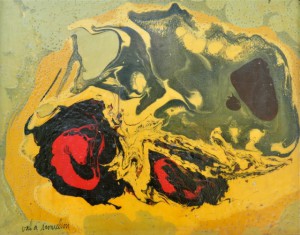 9 comments for “Val Samuelson: The Bulldozing Modernist of Cat City”