Kevin Key grew up in the conformity of a San Diego suburb with a vigilant HOA. Naturally, as a young man he was drawn to the desert to the east where there were no rules and you could find old, imperfect things. A gutted train car in Anza-Borrego, a gold mine in the Chuckwallas. 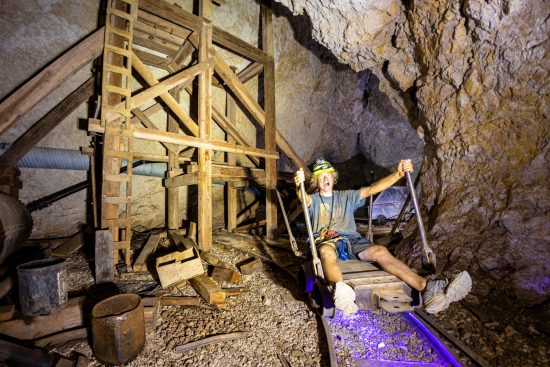 So far his path parallels that of many who have found freedom in the desert and inspiration in the abandoned junk laying around. But Key traveled even deeper into the landscape, deeper than anyone I know of. His odyssey culminated recently in a renegade mining car ride 765 feet underground.

A 48-year-old Ramona resident, Key studied photography as a teenager and built his own darkroom in his parents’ basement. As an adult, he studied the work of San Diego photographer Jeff Morris, who was experimenting with nighttime photography in abandoned buildings before Instagram. “Light painting”, as the art form is called, dates to the 1880s and has been employed by artists as diverse as Man Ray, Ansel Adams and Picasso. 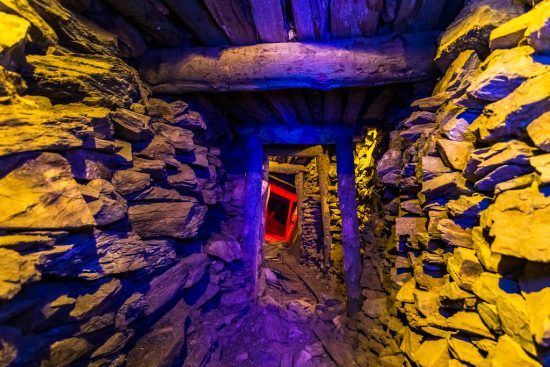 Kevin Key, light painting inside a mine.

Key used his own light painting techniques to glorify the old mines, classic symbols of the desert and the abandoned dreams of treasure seekers. Five years ago–after a divorce and after leaving his job as a software developer–he devoted himself to the chase like a true gonzo explorer. His favorite haunts are Anza-Borrego and the Salton Sea, where picnic tables and park rangers are hard to find.

He was playing on the fringes of a movement called urban explorers or UrbEx, in which “ruinistas” explore abandoned structures. The movement blends outlaw appeal with historical preservation–a normally staid pursuit. For Key, the tug toward ruins–markers of time and decay–had been with him since childhood when he explored old farmhouses and barns in the Chicago suburbs. “I’ve always had a interest in things that are scary or dangerous to most people,” he says. 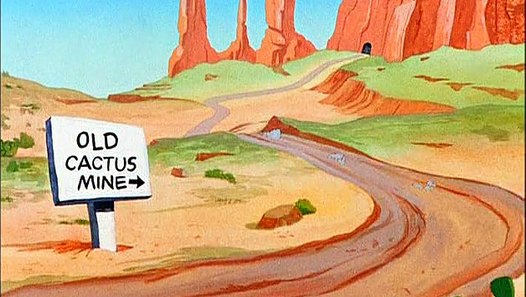 His mine descents got him thinking about the old Roadrunner cartoon where Wile E. Coyote rides an abandoned ore cart through a tunnel. As Key went about his days photographing fancy homes for his new job as a real estate photographer, he nurtured the thought of a winding tunnel and a cart with perfectly intact wheels. He could almost feel the cart speed up and hear the clackety clack of triumph. Most of the mines he explored–sometimes slogging through flooded tunnels in rubber boots–had been raided by souvenir hunters. A working mine cart was an object found only in Kevin Key’s daydreams. 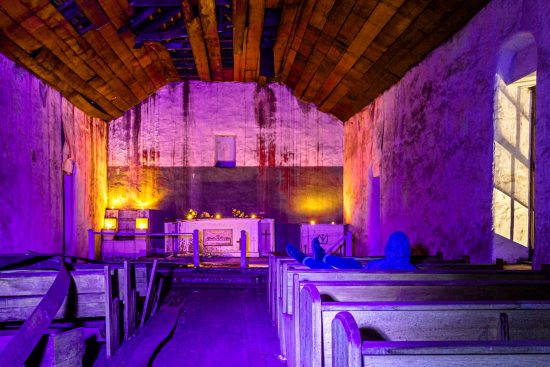 Kevin Key in an abandoned church on All Hallow’s Eve. “Ruinistas” are drawn to time and decay.

Finally he got the call he’d been waiting for. A fellow explorer knew of a mine in Death Valley (Key is keeping the exact location confidential to prevent vandalism.) Because it was more than 700 feet down, it had not been scavenged. There were reports of a working mine cart and a set of steel tracks leading into darkness.

There was no doubt Key was going, but first he had to reassure his mother he would be safe. Sure there could be an earthquake, he told her, but then he could be mugged while strolling in downtown San Diego.

On the big day in October, 2020, Key and his buddy (this was too risky to attempt solo) located the unassuming portal, which looks like a large bear den scraped into the hillside. They entered the tunnel then began to descend an incline shaft at 45 degrees. This part was easy, like walking down a stairway. 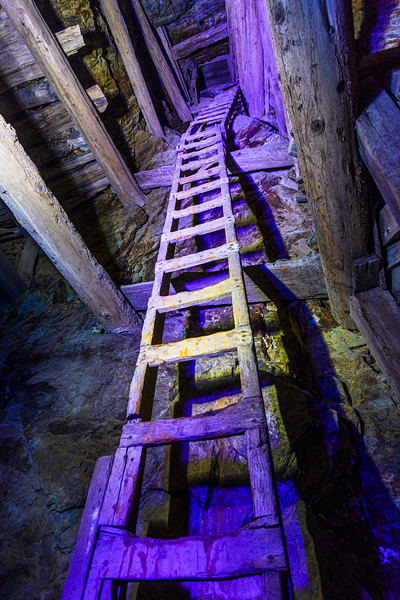 Next came the nightmare part: Vertical escape hatches, each a straight drop of 250 feet. Looking into the abyss, Key had an advantage. A childhood condition, strabismus, had left him without depth perception. What was a terrifying drop to some was just a dark challenge to him. He installed safety lines, and hung on to the old ladder with both hands and feet–feeling for loose rungs and stirring up clouds of ancient dust at each descending step. Aside from a bat or two near the entrance there was no life down there.

Down layer after layer, through connecting passageways and over rubble slides, Key stepped carefully, alert for false floors that can give way. At the bottom, alone for a moment, he turned off his flashlight (he carries two headlamps, a flashlight with extra batteries and his phone light for backup) and found true darkness. “That’s about the only way in modern society that you experience total darkness,” he says. 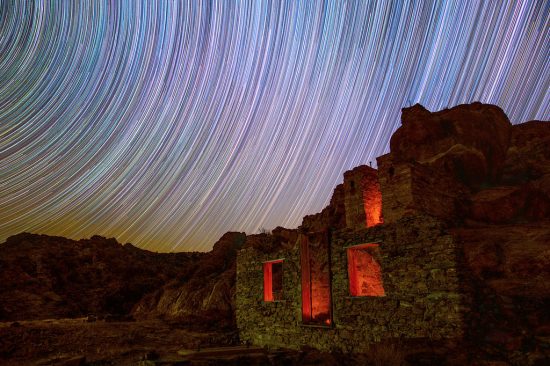 Kevin Key, star trails above the Great Western Mill in the Chuckwalla Mountains.

He traversed more debris slides left by cave-ins–passing old dynamite boxes and a ghostly set of miner’s suspenders–and finally located the pot of gold: a 100 year old mine cart awaiting a passenger. “The bearings on the wheels were in such great shape, maybe because it’s down there so far,” he says. “When you get 100 feet underground there aren’t any bugs and no rain or ultraviolet to decompose things.” 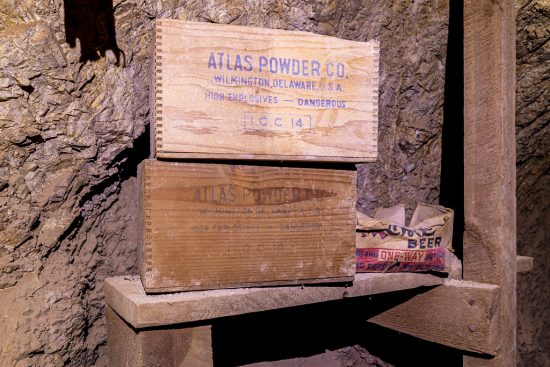 The victory ride–a rush of flashing, joyful movement–is captured on this video. “It was like being behind the scenes in a Disneyland ride,” Key says. “Now I see where the Imagineers got a lot of their inspiration for the sound effects on the Big Thunder Mountain ride. But we didn’t see any goats down there with dynamite in their mouths.” (A reference to the animatronic goats on the Big Thunder Mountain Ride at Disneyland.)

Key aims to one day live off the grid in the desert (he admires Anza Borrego’s hermit poet, Marshall South) and he intends to keep exploring the underlands, going deeper than 765 feet–at least metaphorically. He’ll keep photographing the derps (derelict and ruined places) along with desert wonders like tilapia pools and mud pots, star trails and the Milky Way. In the heavens, as in an old mine, there are no HOAs.

Warning: Mine exploration poses many dangers. Take someone with you and let a third party know when you’ll return. There is no cell phone reception at the bottom. When you descend, remember to conserve energy to climb back up. Leave No Trace. Kevin Key’s rule is: “I don’t break anything, I don’t take anything.” 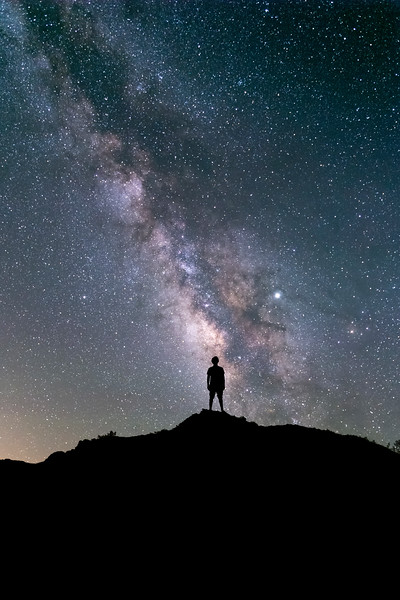 Guardian of the Galaxy. Kevin Key self-portrait in the Borrego Badlands.