December 29, 2010–Lora Woodhead Steere taught for 16 years at the Idyllwild Arts Academy without ever taking a paycheck. She first came to the San Jacinto Mountains in 1890 as a toddler riding in front of her mother’s saddle. With her saint-like face and her mystical dedication to Tahquitz Peak, the acclaimed sculptor influenced scores of students to turn toward art and nature.

Steere died in 1984. She’s becoming increasingly well-known these days thanks to exhibits and events organized by Idyllwild arts supporters. Now you can learn about Steere in a new film by 16-year-old Paris Deesing, a film student at Idyllwild Arts. Deesing’s film When Art Met Idyllwild: A Tribute to Lora W. Steere is an Official Selection for Opening Night of the  Idyllwild 2011 Independent Festival of Cinema. 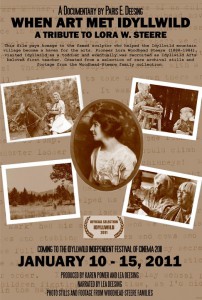 “I felt compelled to tell the story about how Lora’s fame and success as an artist and teacher helped establish Idyllwild as an art community,” says Deesing. “She taught the first class at the school now known as Idyllwild Arts Academy, where I attend as a film major. That, along with the fact that my father is a sculptor and teacher, made Lora a relatable subject in many ways.”

Paris will graduate from Idyllwild Arts in June. Don’t miss the chance to meet her before she graduates to the big screen. 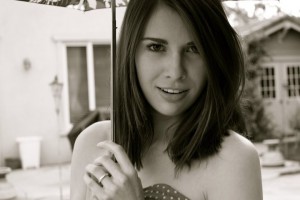 WHAT: Screenings of When Art Met Idyllwild: A Tribute to Lora W. Steere

at the Idyllwild 2011 Independent Festival of Cinema

WHEN AND WHERE: Opening Night (Paris will speak)

Friday, January 14 at 11 AM at The Caine Learning Center