Captain Beefheart was a rock-n-roll wildman, too avant garde—if that’s possible–for the likes of his friend Frank Zappa. But Don Van Vliet (his real name), who died on December 17, 2010, was also a visionary painter of the desert. 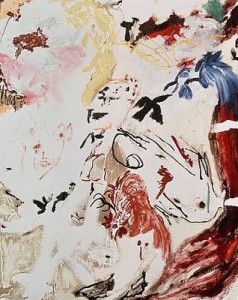 Van Vliet grew up in Glendale and turned to art before he found music–sculpting animal figures at the Griffith Park Zoo as a boy.

He was imprinted with the scent and space of the desert while attending Antelope Valley High School in Lancaster. The allure of psychedelic rock took precedence over art for a time in the 1960s, as giants like Lennon and McCartney raved over Beefheart’s talent. Captain Beefheart and his Magic Band were never commercially successful, but in exchange for the slight critics put them on “Best Albums of All Time” lists and called Beefheart a genius.

In the ‘60s, Van Vliet and his wife, Janet, moved into a trailer in Joshua Tree. This was before Gram Parsons and U-2 and all the others made Joshua Tree a hip place to be. Then it was just forsaken desert. The forsaken places inspired an outpouring of art in Van Vliet. Some called it primitive or outsider art. In any case, his work drew acclaim from galleries and museums in the US and Europe. 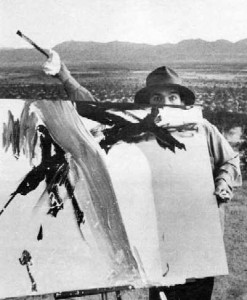 As Van Vliet became increasingly ill with multiple sclerosis, he was more and more reclusive (or maybe he just liked his solitude). In 1993, Anton Corbijn made a short documentary of Beefheart in the desert, with guest spots by the musician’s mother and filmmaker David Lynch. The film captured some classic quotes from this late desert-hermit-prophet-artist.

“I enjoy the environment when there are no people around. Give me lack of people.”

“The way I keep in touch with the world is very gingerly.”