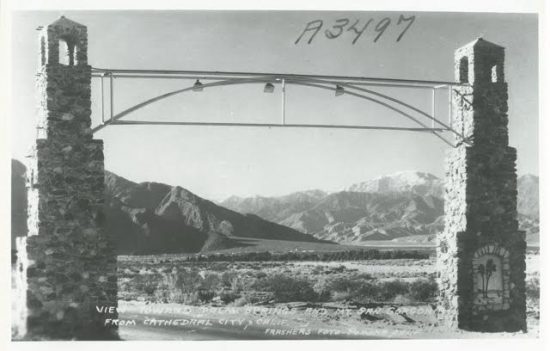 The landmark arch stood at the west entrance to Cathedral City, and appeared as a design in Agnes Pelton’s work. Images courtesy of the Cathedral City Historical Society.

Accompanying the images is an excerpt from Painted Rocks by Josephine Morse True. This hard-to-find memoir depicts the village and the artists, as they were in 1935 when True lived there. Of all the Coachella Valley cities, Cathedral City claims the most beguiling art story: an early band of free spirits gathered around the artist Agnes Pelton and the teachings of Theosophy. Instead of remaining aloof from their neighbors (as bohemians tend to do) the painters befriended plumbers and shopkeepers, becoming an integral part of small town life.

The writer Josephine Morse True was a neighbor of Agnes Pelton, and took painting classes from her. Painted Rocks was True’s cabin, named for the paint-splashed rocks left by a former artist-tenant. 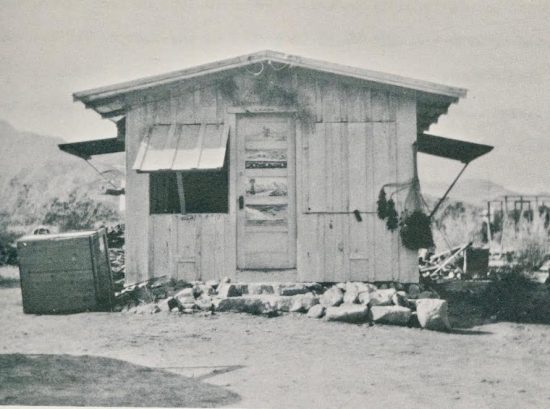 The chapter Comrades tells of Cathedral City’s very first funeral. The entire community gathered in the rocks above town to memorialize the life of a woman named Chan, a World War I nurse who succumbed to tuberculosis, and a companion to the artist Matille Prigge Seaman. Billie, as she was known (or Billy in the sketch), came from a privileged east coast background, and showed thoroughbred horses in Madison Square Gardens as a youth.

Billie (Matille Prigge Seaman) was one of the earliest artists in Cathedral City and set the standard for the mavericks who would follow.

On a rocky promontory a mile back of my cabin, members of the American Legion drove into the soil a short, wooden cross. The next afternoon as the sun dipped low, numerous friends and neighbors passed Painted Rocks, traveling toward that small white cross which from my kitchen window gleamed like gold in the late sunlight. When I saw their distant figures zig-zagging up the steep hillside I hurried along to join them there. For our dear friend Chan had died and her ashes were to be scattered from the cross at sunset.

We hardly knew any other name for her than Chan, but it was sufficient that she herself was a lovely woman of gracious, fragrant presence, beloved by all, especially by her true and faithful pal Billy, with whom she had lived for many years. Chan had seen hard active service in France during the War and had contracted tuberculosis. Further complications made her physical condition painful. Yet notwithstanding her suffering, Chan had high courage, a gay light touch to her personality and a devilish twinkle in her eye almost till the end, through long, slow-passing years in bed. High courage, too, had Billy, who was not really a Billy in sex but another woman whose paintings of the desert expressed her love for it. Billy was large in stature and girth, carrying herself vigorously. She always looked as though fresh from the tub; her short gray hair was brushed back from a fine forehead, blue denim work pants were clean and her shirt, open at the throat, white an immaculate, although her smock might bear on its ample bosom all the colors of her paint box. The carriage of her head was splendid and unforgettable. Both Billy and Chan were Lovers of Life, with capital L’s, and they enjoyed it to the utmost. They were like two schoolgirls, with never an end to their chatter. The first thing in the morning Billy started the coffee perking and ate her breakfast on the sleeping porch where Chan sat up in bed and tossed over fresh pieces of toast, hot from the toaster at her elbow. They read aloud to each other from books on theosophy and the ancient Hermetic wisdom; they gossiped merrily about local celebrities; they kept Open House for all with Open Hearts. 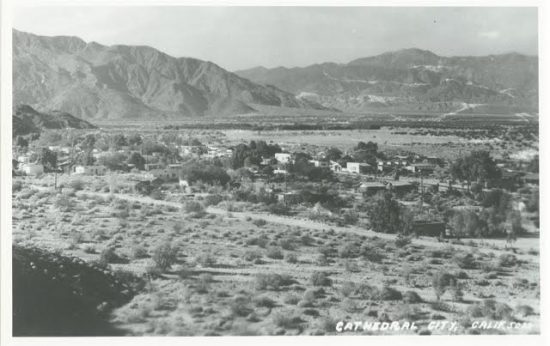 Cathedral City had only about 100 full-time residents when Billy and Chan lived there.

Chan loved the desert mightily. She lay and watched its changing evanescent colors and the waxing and waning of the moon–the dark velvet skies of night, star-studded. When her strength had nearly gone she asked Billy to see if her ashes could be scattered over the desert near a rocky cove in the mountains, owned by a friend of both. A still, solitary spot embosomed in the hills, yet in sight and reach of human beings and human habitations. The wish was granted and after the cremation, Billy brought the ashes of her beloved friend to the foot of the little cross put up by the Legionnaires.

We had already picked our way up an extremely rough, precipitous cliff to a more or less flat space behind the low white cross, and were waiting there in silence for Billy’s arrival. Her ability to mount the difficult ascent seemed doubtful for there was no pathway to the top and she had a very bad knee which confined her walking activities to smooth ground. We need not have questioned Billy’s power, however. Up she drove in the old Fresh Air Taxi and with unflagging, indomitable spirit and the help of a stout stick and a strong “arm-up” at critical points, managed the climb…Dear Billy, the grand old trouper.

Besides the bugler from the American Legion, nearly everybody in the community was there. Mountain shadows spread over yellow sand. No longer did we stand in sunlight but in quiet groups watching the glow from the vanished sun spread above the mountains; not a spectacular sunset of crimson and gold, but a skyline majestically high and grand, broken into peaks and huge dark masses against a glowing canopy.

Directly at our feel lay the desert, stretched out in mystic vastness. After the prayer and quiet speaking strains of a violin, Billy moved to the edge of the cliff and tossed out that little handful of gray ashes over the purpling desert. There must have been a tearing at her heart but Billy’s fine gray head was high as ever. No droop, so sag, no fear or uncertainty as she left Chan’s ashes there in the desert with which they both felt such a mystic communion. Billy’s heart was dauntless and her spirit also was at peace. She stood there in her handsomely embroidered long Oriental coat, performing her part gratefully and in as lovely a way as Chan could have desired. At the last, taps was blown by the American Legion bugler. Never did it sound sweeter over any soldier’s grave and never was it blown over any braver soldier. Our postmistress and her husband had brought a basket of beautiful red roses from their grapefruit ranch and these we scattered with love and reverence. Slowly then we clambered down, lingering on the hillside to speak of that great loyal friendship, one of the strongest and truest that ever came within my knowledge. 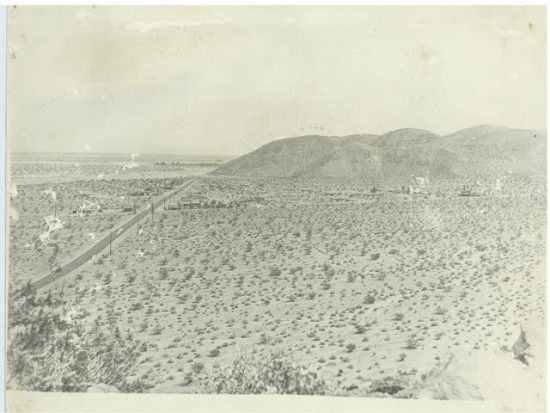 There was a remarkable sincerity and understanding between Billy and Chan. A full comprehension of each other and of the finer values of life, stripped of trappings and fol-de-rol. When hot weather came, they used to leave the desert to spend May, June, July and August of each year in the foothills of the Sierra Madre. Chan traveled in an ambulance, Billy following in her old car which she had painted an easily distinguishable hue. If one wished to be complimentary one named it Cafe-au-lait. They dubbed it the Fresh Air Taxi as the windows were permanently stuck and therefore permanently open. Very different from the swanky dog carts with high-stepping equines between the shafts which Billy used to drive in her girlhood at horseshows in Madison Square Gardens. 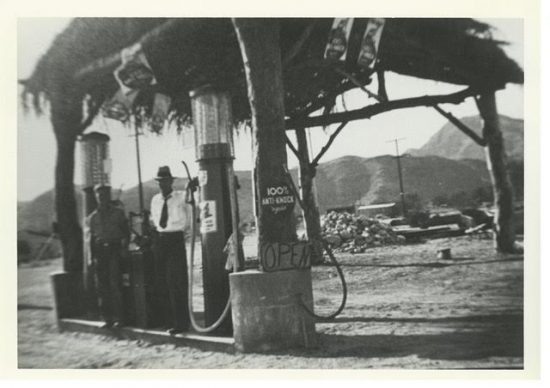 The “Taxi” was filled with a heterogeneous collection of things, animate and inanimate. First and foremost, Billy herself, ruddy face beaming as she leaned out, waving: “So long, Old Scout. Till October! Remember now, be good and don’t take any rubber pennies – Cheerio!” A face showed in every window. The old, green parrot shouted vociferously an unintelligible stream of oaths as he swung back and forth, the two little Pekinese dogs, Ming Choy and Fay Toy, barked excitedly. Canary and cats were shut in cages and baskets, but their presence was somehow sensed. Off they rattled and rumbled, an oddly assorted but companionable crew….the Big People and the Little People. I asked if it wasn’t a good deal of a job to close the house and get packed for the move – “Oh no,” Billy answered, – “Nothing to it at all. Chan’s things all go with her and I wrap up my pictures and put them carefully on the back seat. Then I just throw in the little dogs and put the cats in their baskets and hang up the parrot and cover Pekey in his cage and a few odds and ends and that’s all there is to it….Cheerio….we’re off!” 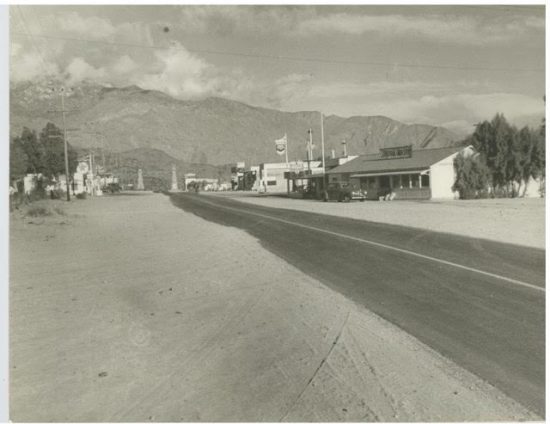 Now when she makes her trips back to civilization there is no Chan traveling ahead and there is a quiet, too empty home in both foothills and desert with no Chan to greet her from the pillows. But, as Billy says, “I have to keep my chin up. We often talked about it when Chan knew she couldn’t last much longer, and Chan always said, “Billy, whatever you do, don’t grieve for me. Don’t make people miserable and uncomfortable on my account and don’t be unhappy yourself, for you know as well as I that my time has come, and the quicker the better for both of us.”

Billy did as Chan had asked. She took a cocktail just as she always did, with only a very small tear standing in the corner of each eye as she raised her glass: “To Chan!”

Thanks to Cathedral City historian Denise Cross for suggesting Painted Rocks. The book is out-of-print and used copies are rarely available online. The Palm Desert and Indio libraries have copies of the book. Thanks also to Janey Ash of the Cathedral City Historical  Society for the selection of photos. 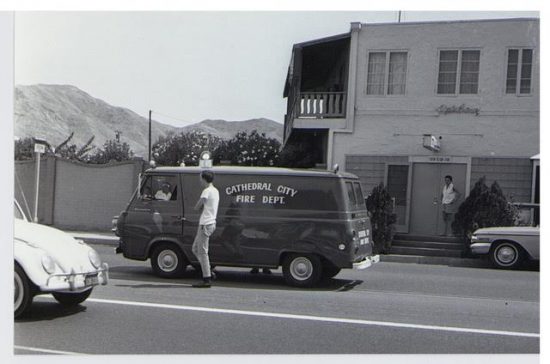 4 comments for “Funeral in the Rocks: A Tale of Cathedral City’s Early Artists”