If you walk the levee behind the Palm Springs PetCo and look toward the mountain you’ll see them, but barely: four little rock houses. It looks like boulders tumbled down the hillside and assembled themselves into a hamlet out of a children’s story. Aside from one new roof–suggesting occupancy–you’d think the  structures were vacant and about to be bulldozed to make way for luxury homes. 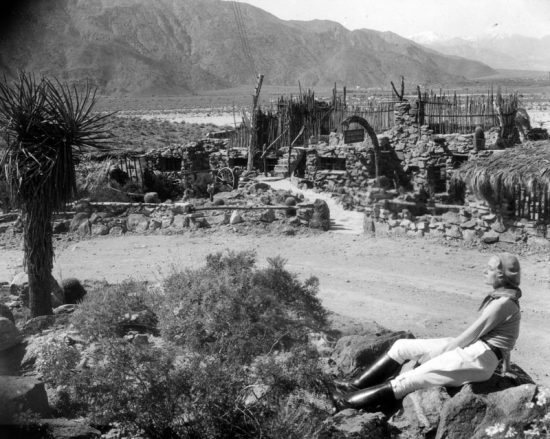 I’d puzzled over the hamlet many times over the years. Then I puzzled some more when I heard that Christina Lillian, the glamorous arts patron and friend of Agnes Pelton, had once owned them and rented to artists such as Burt Procter.  These four miniature houses are at an intersection where desert art and architecture meet. As I began to search, I discovered that our own Hopi Village (as the builder called it) is in danger of disappearing altogether due to its very hiddenness.

Longtime desert resident Les Starks told me that the houses were built by an unknown master of 1920s and ’30s organic architecture in Palm Springs: R. Lee Miller. Les forwarded some old newspaper clippings and encouraged me to try and find out more.  “Miller worked in extremely difficult areas to build on and left us some amazing places that are unlike anything else,” he said. “His buildings are some of the most unique, well-designed labors of love in the desert.  Frank Bogert [the late Palm Springs cowboy mayor] described him as an artist who carved and painted the massive beam structures in old Las Palmas digs for Alvah Hicks and other builders.” 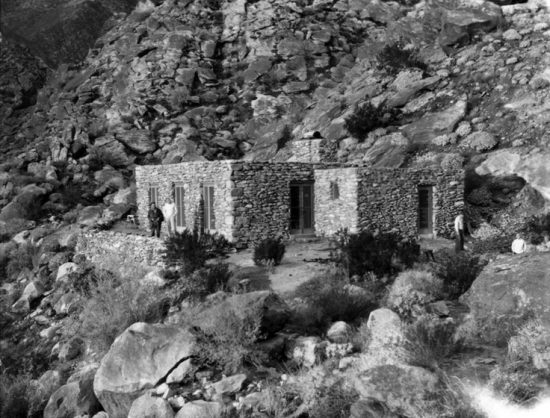 In addition to Araby, Miller built homes in the secretive enclave above the Indian Canyons, the Andreas Canyon Club. The private community, founded in 1923, features dwellings that grow right out of the rock, camouflaged like reclusive desert animals. “No one knows they exist because of the way Miller built the houses there–they literally disappear on the hillside,” Les says.

If there is an architecture native to Palm Springs, I’ll vote for Miller’s twin creations: the Araby rock houses and the Andreas Canyon Club. (Miller purchased 330 acres above Ramon Road from the photographer Fred Clatworthy and had a plan to build yet another hillside village there, but it was never completed.) Why, then, in an era of unprecedented architecture worship, is R. Lee Miller forgotten? One reason is that his own story is elusive. Like his hillside dwellings, he was good at disappearing.

Robert Lee Miller was born in Hill, Texas in 1887. He served in World War I and trained in civil engineering, then turned to carpentry when he came to Palm Springs–according to the Palm Springs Citywide Historic Survey (link below). He had no formal training in architecture, yet built many early Palm Springs residences, including the Lawrence Davidson home in the Mesa, constructed for the president of US Steel. This was once the residence of nursery owner Earl Neel and is now home to talk radio personality Joey English.

He built a home next to present-day Moorten’s Botanical Garden for the actor Reginald Owen, and the Casablanca adobe for Pearl McManus, as well as many others. But we’ll leave it to an architecture fan to document the full range of Miller’s contributions. Here we’re interested in his Indian houses, as they were called. The first house was completed by 1925; in 1929 the Desert Sun announced that  Miller was building his Hopi Village on 20 acres of hillside he owned in Araby. 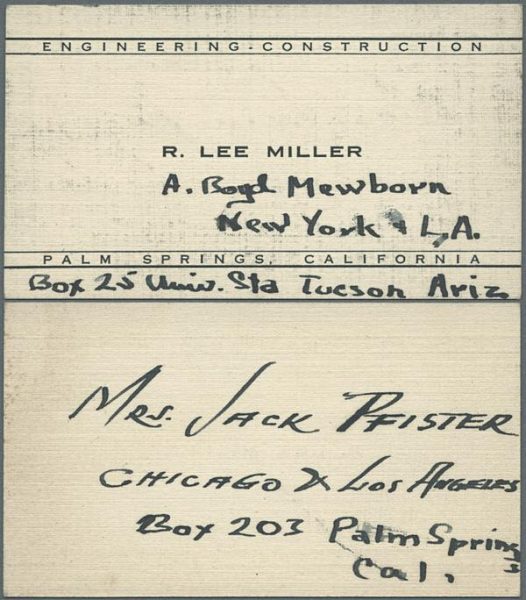 Before I say more, please be advised that there is no public access to the rock houses. Once you come to the gated dirt road, you are trespassing and the local residents are quick to call police. The best way to get a glimpse of Miller’s creation is from the Araby wash or the levee behind the Smoke Tree Commons shopping center.

The structures look too squat for standard humans, a feature that has led to various Lilliputian legends that are passed down in Palm Springs high schools. A student who wrote a paper on the topic, Ariel Zepada, says the four-home village reminds him of The Shire, J.R.R. Tolkien’s idyllic hobbit town. Why did Lee Miller build a Hopi-hobbit colony of Araby rock? Because he left so few clues, we simply don’t know.

We do know that Cabot Yerxa later built his own Hopi-style house in Desert Hot Springs and that he was friends with Burt Procter, so he must have visited the Araby houses. Cabot may have even borrowed the idea from Miller. The borrowing from Hopi and Navajo culture was common at the time. Many local artists were also going off to seek inspiration with the tribes.

The enigmatic Miller does show up now and then in early society columns. In one entry from 1940, we’re told that he had long worn an ancient hat (“wide and floppy and discolored”) and there was quite a stir around town when he replaced it. “Lee Miller has a new hat…a big and splendidly white new Stetson.” 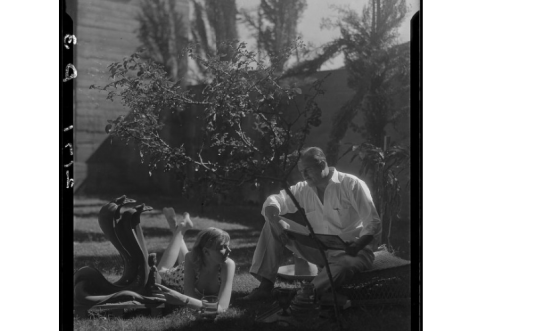 Miller’s Araby houses were more boho than garden party in style. They featured handcrafted doors, windows and shelves, handcrafted ironwork for the door latches, and handmade fireplace tools and anvils, according to an article in the June, 1992, Palm Springs Life. Writer Margo Matteas talked to Toni King, a New York hairstylist who served a celebrity clientele at her salon in downtown Palm Springs. King lived in one of the Araby cottages for more than 30 years.

Some of the masonry around the houses was stamped with Hopi designs. There’s also an equestrian motif, with horseshoes and tie rings embedded in the concrete. The floors were a psychedelic swirl of green, yellow, blue and pink rock.  “It’s still a mystery as to his method,” resident Toni King said. 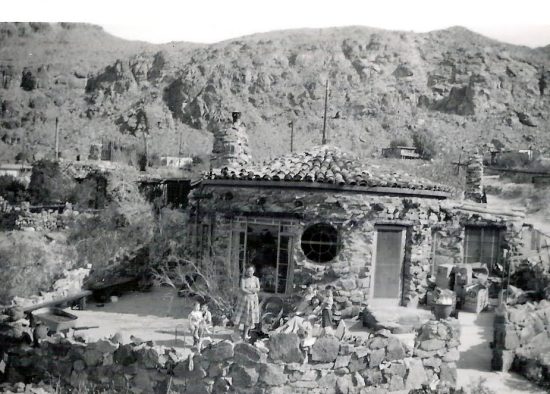 The rock home of Clarence and Betty Reed in 1953, courtesy of Palm Springs Historical Society

Miller admired the Indians of California, Arizona and New Mexico. He learned Indian ways, King said, “until he, too, could leap up the side of the mountain behind the rock houses like a deer or an antelope. Legend has it he could sprint straight up Tahquitz Falls, all the way to Idyllwild.”

While I appreciate this Nature Boy portrayal of Miller, it doesn’t quite fit the society dandy in the photos. It’s possible the flamboyant Toni King was building her own mythology–or it’s possible R. Lee Miller was exactly as described: an ecstatic shaman-architect making mad leaps up Tahquitz Falls.

The rock village seemed to have a special draw for women. One of the original residents, Perle Wheeler Martin, lived in the Casa Contenta house for years. After her came the stylish Swedish artist and arts patron Christina Lillian. Then there was Toni King, an expert horsewoman who threw big parties at the house she called The Cave. Another resident of 25 years, Virginia Moore, was a Chicago transplant and former fashion model. Both she and Toni King enjoyed sleeping on the roofs of their houses (there’s even a rooftop barbecue grill) and carrying around shotguns to chase away intruders. Toni King would arise from her rooftop boudoir and go horseback riding at dawn on her big bay, Abner. 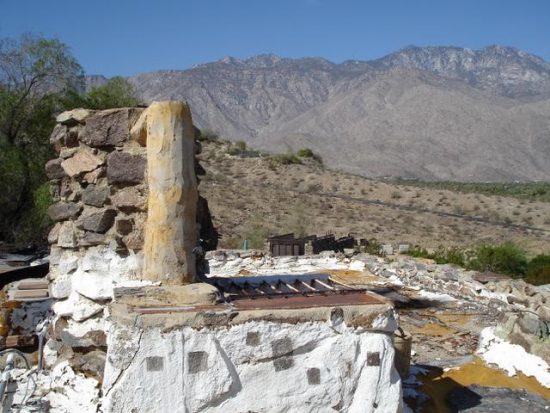 The rooftop barbecue at Casa Contenta 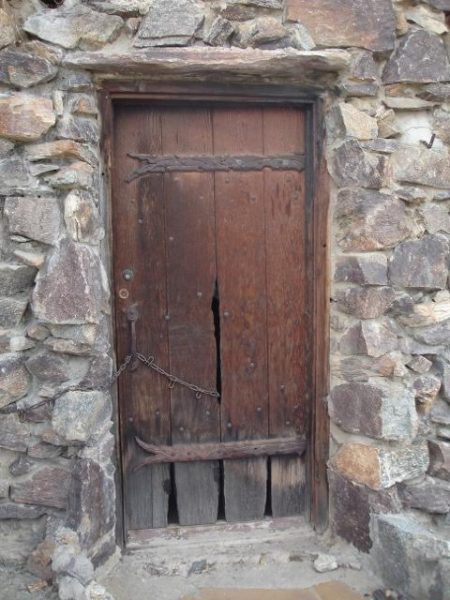 In the years since, a variety of equally vivid residents have made their own rockhouse myths. Constance Walsh, a Joshua Tree artist and writer, lived there in the late 1970s. The gun-toting Toni King gave her a horse, Mucho Gusto. “I loved living there in the eight-by-twelve foot little structure that held everything I needed,” she says. “When scorpions the size of baby lobsters started trotting into my room, it was time to go. ” 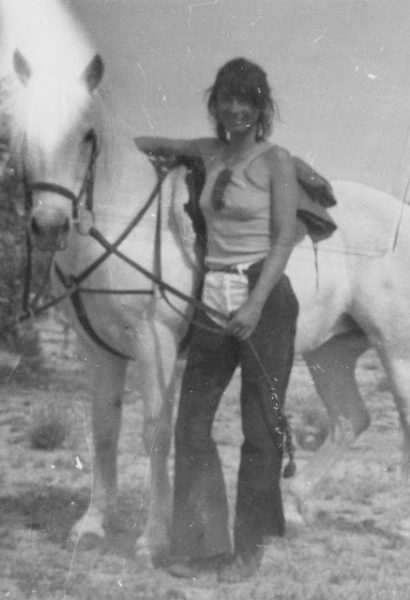 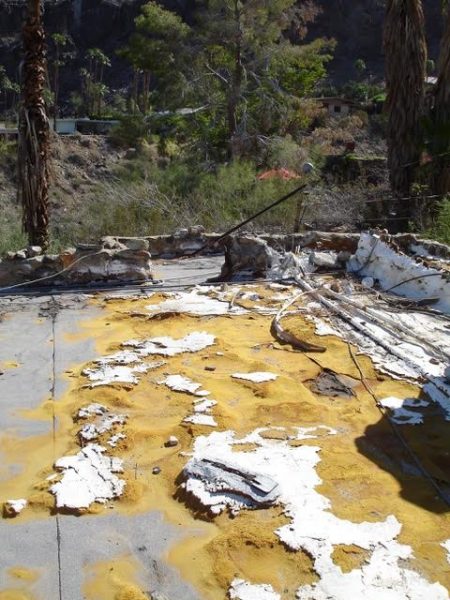 I finally got to visit The Shire one day, after years of ruminating on the colony from afar.  A current owner allowed me access and I was both charmed and dismayed by the view up close. It was clear that all but one of the houses had been neglected for some time, with boarded-up windows, crumbling rock walls, dead landscaping and shredded roofs. Palm Springs–the City that mobilizes to save everything midcentury–seems not to have noticed this handmade hobbitville slipping away.

But since that visit in the spring of 2016, hope has arrived in the form of actor and artist Rudy de Rooy. It was local artist Terry Masters (owner of the Desertpainter Gallery at 370 N. Palm Canyon Drive) who suggested Rudy take a look at the rock houses. Rudy contacted the owner and started trimming away brush until a beautiful little stone cottage emerged from the undergrowth. Rudy moved into Burt Procter’s former home after hauling out tons of debris and “more dead animals than I’ve ever seen in my life.” For now, Rudy de Rooy is the able custodian of R. Lee Miller’s vision.

“These places need to be preserved at any cost and brought back to what they were before,” Rudy says. “They deserve to be lived in. They deserve to have a fire in the hearth.” 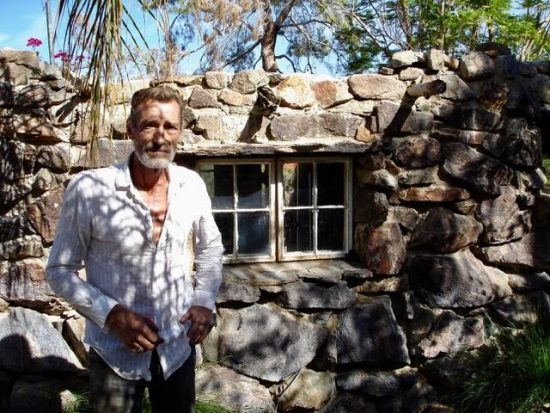 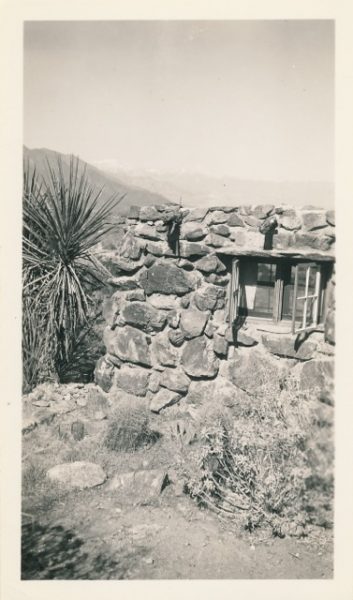 Burt Procter’s photo of the rock house where he lived. 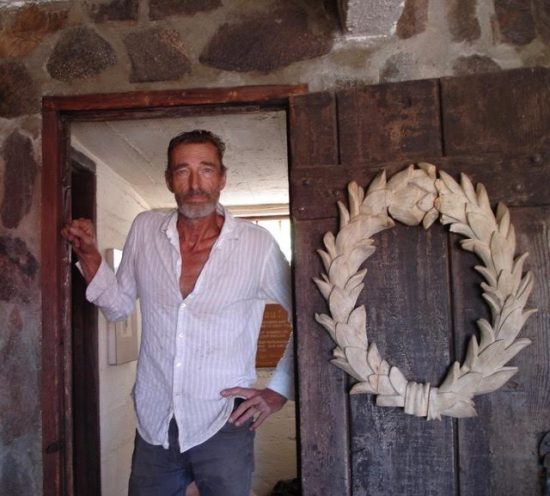 Rudy de Rooy in the rock house, after clean-up.

← Desert Romantic: The Newly Discovered Letters of Paul Grimm
Funeral in the Rocks: A Tale of Cathedral City’s Early Artists →

6 comments for “The Hidden World of R. Lee Miller and the Araby Rock Houses”