In Mari Coates’ new novel, real life characters Billie Prigge Seaman, Christina Lillian and the Hillery family are reanimated, as is the beloved little hamlet of Cathedral City itself. I’ve been living with Agnes’ story for more than a decade so I say with reasonable certainty: Coates’ first-person telling gets the artist’s quiet voice just right. The following excerpt from the novel–out in April, 2020–captures the hopeful moment when Agnes arrives in Cathedral City and discovers her tribe and her true land. –A.J.

Palm Springs, California, January, 1932. I was fifty when I fled the east and the cold and the critics and the art scene and boarded the trains that brought me to the desert. From Los Angeles I proceeded to Palm Springs, which I had imagined as an empty oasis with a cluster of swaying palm trees. Of course, the train had been packed. It was, I thought wryly, a lot like Southampton. Stepping down, I was jostled by beautiful people with tennis rackets, overnight cases, and ukuleles. I paused and shaded my eyes. 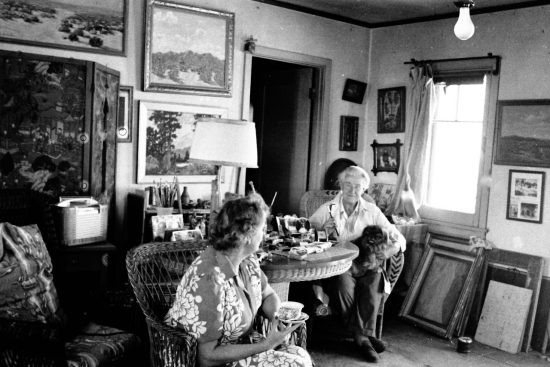 Billie Seaman, at right, in her Cathedral City studio with Catherine Ellis. The photos–complete with age spots–are from the Wilson Ellis Collection, courtesy of the Cathedral City Historical Society. The CCHS is currently working to preserve and catalogue the large collection.

“Toot toot, Agnes, here I am!” The desert brilliance was blinding, and I had to search to locate my friend. Finally, I spotted her, standing up in that old, open-top jalopy from South Pasadena, holding the steering wheel for balance, and waving. Here was Billie, whom I’d not seen since she and Christina had slipped away from the Glass Hive nearly three years earlier. Staring right at her, the only way I could recognize her was by the slump of her bulky body. She had discarded her dark cloche hat and shapeless dress, cut off her hair and slicked it back, and was wearing a man’s shirt and string tie. Next to her was Christina—lovely as ever—who sported a sundress, a wide-brimmed picture hat, and was waving her arm. Billie laughed at my obvious surprise as I made my way over.

She jumped from the car and threw her arms around me. “Welcome!” She grabbed my bags and hefted them onto the back seat. Up front Christina moved over and splayed her slender arms across the top of the seat. I slid in next to her, and she gave my shoulders a squeeze as the train shrieked and puffed and pulled away—headed where, I did not know. 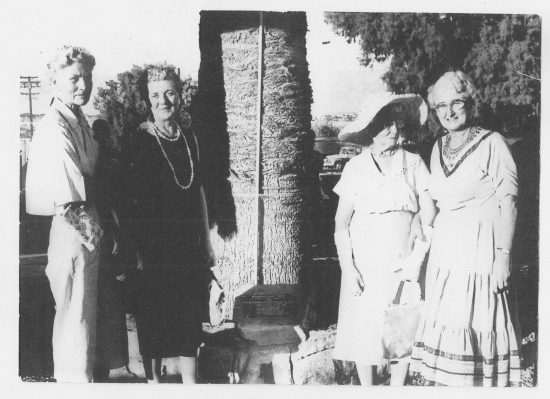 Christina Lillian, at left, 1959. The palm tree was being given by the Cathedral City Woman’s Club to the local Rotary.

“We’re off,” Billie said. The car rattled and smoked as she maneuvered out of the gritty parking lot and onto the straight, smooth highway.

“Did you see any Hollywood stars on the train?” Christina asked.

I shook my head.

“Well, you just might before we’re done today,” Billie said with a grin. “Keep your eyes peeled.”

We joined the flow of sleek sedans inching along on Palm Canyon Drive, passing a quaint General Store before turning east, swerving to avoid a handsome young man weaving in and out of traffic on a bicycle.

“This is the Movie Colony,” Billie said. The wide boulevard could have been in Beverly Hills, except that here the trees were short and pruned like shrubs. Instead of mansions, the houses were generous bungalows, each surrounded by a very green lawn, which was punctuated here and there by shaggy palms, but care had been taken to leave the sense of openness. And of course, the ring of mountains with their solid benevolence. We passed the El Mirador Hotel with its mission-style tower, where many of the cars turned in. Soon the traffic had vanished, and we were back on the highway and alone.

“That’s where the snooties live,” Christina said. “Now we’ll show you where the artists are.” What I loved about these two women was their good humor and optimism—an ease with simply being, which I took in like a slow, deep breath. Why not try that, I thought. All around us an oceanic desert invited me to stillness. 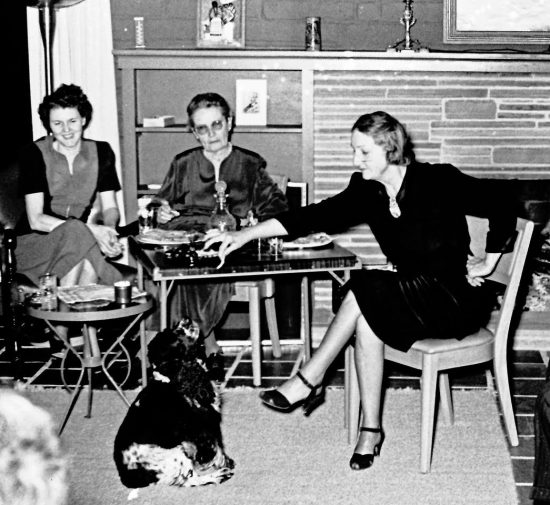 At that time the newly incorporated Cathedral City announced itself with a pair of towers, obelisks like Cleopatra’s Needles, one on each side of the highway and visible from afar in the dry desert air. As we drew near, I asked Billie to pull over. I climbed out and stepped into the wild desert. Recent rains had caused clumps of grass and flowers to shoot up, giving the landscape a sense of joyous disorder and appealing wistfulness. I realized I felt at home, which caused a sudden surge of spirit, and a powerful presence burned within me. I glanced back toward the road and listened to the silence. A truck clattered by, raising dust. And then silence again. I looked past the slope of desert to the rock-strewn foothills, my eyes coming to rest on the mountains.

The mountains. The silence. The serenity. I felt I could stand there all day and stare for as long as I wished, and no one would ask what I was working on and why I wasn’t doing more.

“Agnes, look this way,” Christina called. I turned, and she was aiming a camera in my direction. 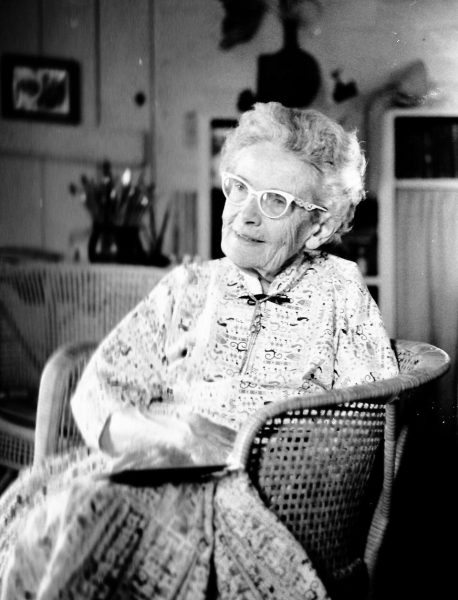 “Good,” she said. Dazed, I climbed back into the car and Billie shifted into gear. Farther down the street we passed a cluster of somewhat dilapidated storefronts and a building Christina said had been the Indian trading post.

“It’s going to be Cleo Cree’s gallery,” Billie added. “Remember her from the Hive?” I recalled an ambitious art lover who had indeed wanted to open a gallery and had pledged to show my work. “Cleo’s a friend,” Billie went on. “Hell, everyone here’s a friend.” A pair of tall palms flanking the dark wooden door nodded lazily in the breeze.

“Well,” Christina drawled, “that’s the commercial district. Oh, meant to tell you that we met a guy who’s bought a whole tract to build an artist colony. Right here.”

We drove on, and I marveled again at the ring of mountains and the brilliant light warming the valley. Billie turned onto Cathedral Canyon Drive and stopped in front of an imposing stucco house, arcaded in the front. 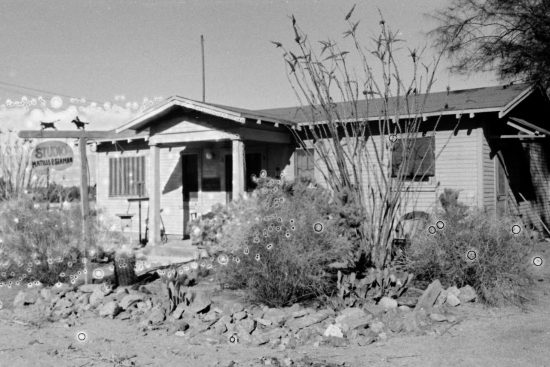 “My house,” she said, pausing while I took it in along with the earthmoving equipment parked next to it. “Still under construction.”

“I am,” she said. Her face was composed and serene, and I envied her. I had believed I was in my windmill for the long haul.

“I love starting over,” I said, shaking off the sadness. “The windmill was sold, and now I’m a visitor everywhere, which gives me great freedom.”

“I’m done with that sort of freedom,” Billie said. “You can have it. You’re welcome to bunk here with me—it’s a little rustic at the moment—or, if you prefer, Christina has a room for you.”

“Agnes wants a room.” Christina gave my shoulders another squeeze. It made me feel conspiratorial and wicked in a good way. I did indeed want a room. 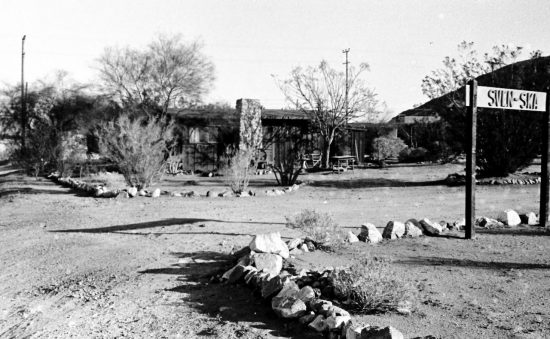 Billie crossed the highway and pulled into a stone-strewn drive where a small sign announced SvenSka, in honor of Christina’s Swedish heritage. Identical cottages for rent ringed the house, which resembled a chalet. In the center was a thready tree with ghostly pale green limbs—my first smoke tree—flanked by a pair of exuberantly spikey barrel cacti.

“Here we are.” The car stopped. Billie grabbed my bag and we followed Christina inside, where I was shown to a back room that could double as a sunroom in the winter—and an oven in the summer.

“Stay as long as you like,” Christina said.   ©MariCoates 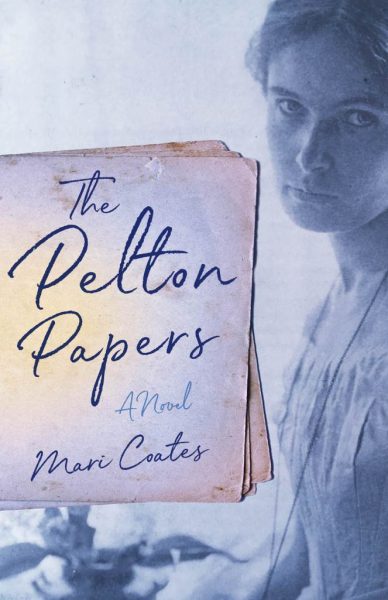 For more on Mari Coates and The Pelton Papers, see: https://maricoates.com/

4 comments for “The Pelton Papers: A Novel”