With Desertscapes behind us for another year, the theme of desert-influenced art continues in these exhibits locally and elsewhere in the West. 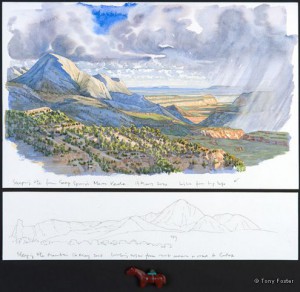 Sacred Places—Watercolour Diaries from the American Southwest opens  May 18, 2012 (through July 14) at Gerald Peters Gallery in Santa Fe. British adventure artist Tony Foster models all the “best practices” for plein air painters. He travels far into the wilderness, hiking 12-14 miles a day, in the style of early exploration artists. He keeps an expedition-style log and annotates his paintings with journal entries, as well as quartz crystals, glass beads, quail feathers, arrowheads and sand–all collected on his excursions.

He also uses his art to promote conservation (another Best Practice). Humans have always needed to express reverence for extraordinary places, he says, whether through creating National Parks, ceremonies or landscape art.

When it comes to the land, he tries as hard as anyone painting today to get close and go deep. Lucky for us he is a fan of the deserts and has painted in Joshua Tree, Death Valley and Anza Borrego.

At the opening on May 18th you can visit with Tony Foster in an informal gallery talk. In an unusual show of support for the body of work, the complete Sacred Places exhibition has been purchased by a private collector, for donation to a museum or foundation not yet named.

For more on the exhibit:

For more on Tony Foster: 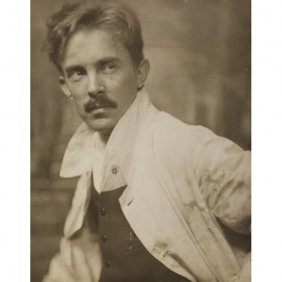 Carl Oscar Borg: An Artist’s Journey opens May 23, 2012 through September 9, 2012 at the Wildling Art Museum in Los Olivos, near Santa Barbara.

In a description that applies as well to the previous artist, Carl Oscar Borg has been called an “artistic ethnographer.” The Swedish-born Borg, who died in 1947, traveled extensively among the Navajo and Hopi Indians. Like many desert painters–such as Jimmy Swinnerton and Carl Bray–he frequently traveled between the Arizona Indian lands and the plainer California deserts, taking both as his subjects. The painters seemed to thrive on the contrast between Indian cultures and empty lands.

A scene painter in the movie industry, Borg went on to become a big (though sometimes overlooked) name in California Impressionism. He had a home in Santa Barbara, and made an extended recuperative stay in Palm Springs in the 1930s, disheartened after his friend Charles Lummis died. A journalist and editor, Lummis was a mentor to many artists and writers including Borg and Maynard Dixon. 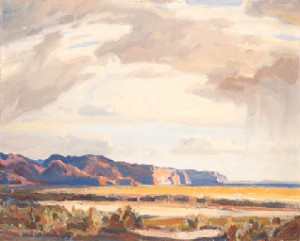 The Wildling is the only art museum dedicated to honoring the wild places of the nation and the West.

Carl Eytel Exhibit in Palm Springs If you make it by the Palm Springs Historical Society before their June closing (you can visit by appointment after that) you can see their small but fine display dedicated to Carl Eytel. The hermit-artist came to Palm Springs in 1903 and lived in a cabin where the Tennis Club is today. There surely were painters in Palm Springs before Eytel, but to most of us he is the Ur-painter, the source of the entire Smoketree School. Most people go to Spencer’s restaurant at the Tennis Club for the ambience; I go so I can point at the hillside and say: Carl Eytel lived there. 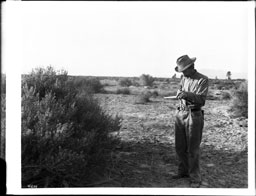 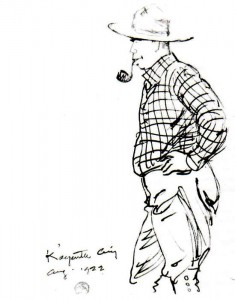 Rare audio interview with Jimmy Swinnerton. You don’t think of the northern California coast as a place to look for desert paintings, but one of the best sources of information on the subject is the Bodega Bay Heritage Gallery. Their May, 2012, newsletter includes a link to a 34-minute audio interview with former Palm Desert resident Jimmy Swinnerton. This is apparently the only known recording of Swinny’s voice.

Also don’t forget the Jimmy Swinnerton-Bill Bender exhibit at the Historical Society of Palm Desert. The museum is open through May. The exhibit, including an assortment of Swinnerton’s pipes, will likely be on view again next season.

The Painted Desert at a Brand New Lancaster Art Museum—Lancaster is almost as unlikely a destination for desert art as Bodega Bay. It is the desert, after all, but Coachella Valley residents don’t normally look in that direction for inspiration. They will now, since the May 5th opening of the Lancaster Museum of Art and History, known as MOAH. The slick 20,000 square foot facility includes five galleries, a store and restaurant. Executive director Andi Compognone was former curator at the Riverside Art Museum and the Millard Sheets Center in Pomona.

The Painted Desert, on view now through August 18, includes a wealth of traditional and non-traditional artists who study the deserts: Samantha Fields, Cole Case, Glen Knowles, NASA artist Dennis Calaba and many more.