I think of El Paseo art galleries as places people go to decorate the walls of their luxury homes. Having no luxury home (maybe my Dinah Shore-style pad was luxurious when it was first built 50 years ago), I rarely walk this gallery-rich stretch of Palm Desert. However, I escorted out-of-town visitors there recently and was arrested by a painting of a train in the empty desert.

The Prospector (Part I)

I am enamored of trains these days because of my friend Carl Bray, the artist and railroadman, who died recently. But there was something about this particular train on a wall of the J. Willott gallery that grabbed my complete attention regardless of appeals to sentimentality. The painting just transcended traininess.

When I learned more about the Irvine-based artist, Francis Di Fronzo, I had to give credit to my unschooled instinct. This was indeed no country club painter, but a man with a real desert initiation story to tell. As he told me on the phone, Francis was immersed in the desert only briefly, at age 21. It was not a sublime experience. In fact, it was really awful. But his memories of nine weeks in the desert keep coming back to him, asking to be reckoned with. The result: the painting that stopped me dead amidst the flash of El Paseo.

When Francis was still a teenager, a perceptive art teacher saw that he had talent but lacked discipline. The frustrated teacher said one day: “I wish I could just lock you in the desert for year to see what you’d produce. “

A few years later Francis was enrolled at Cal State University Fullerton and seeking an artistic direction. “What my teacher said made sense all of a sudden,” he remembers, “so I went with a friend out to the Mojave looking for some place to live. We ended up driving down this road; I think it was called Standard Wells Road. We saw this duplex that had a ‘for rent’ sign.”

No Future or Past, Map or Path

Even as Francis tells it, the tale has a fuzzy, dreamlike quality. What happened next was not quite like Georgia O’Keeffe’s triumphant stint at Ghost Ranch.  Francis was too young. He was too alone. There were snakes and shadows out there. Then, in the grand finale, he heard someone moving around in the supposedly-vacant half of his duplex one dark night. He stayed up all night clutching an axe.

“I just bailed out,” he says. “I walked away. I couldn’t handle it. I haven’t been out there ever since I left.”

Fast forward almost 20 years and stir in all the stuff that happens to a young artist. After graduating from Fullerton, the San Pedro-born artist went east. He earned his MFA at the Pennsylvania Academy of the Fine Arts, and won a prestigious Pew Fellowship of the Arts in 2004. He painted grasslands, coastal scenes, cities at night and was acclaimed by critics. In her arts blog, Libby Rosoff said Francis’ paintings are “quite real and unreal all at once. Sea merges almost imperceptibly into sky. Fields of wheat or grass go on and on, one blade at time.” (In fact, Francis had developed a unique style of painting grass blades with a comb made of 60 or 70 individual hairs attached to a strip of wood.)

It didn’t matter to Francis. Even though he says he’s a “dedicated realist”, his work is not married to the actual landscape or actual places so much as to memory and imagination. He didn’t even have any photos to remind him of the house in the Mojave. “I left everything behind when I left.”

The one thing he took with him was a strong feeling, almost an enchantment or a haunting. “I realized the nine weeks I was there completely changed my aesthetic. Everything I do sort of has this emptiness to it, and that’s where it comes from.”

In his paintings Francis was recreating that time and feeling. Every painting I ask him about has one foot in reality and another in imagination.

The Gate (Part I)

The Gate Part 1. That’s the gate on the side of the house. It was falling apart. I was trying to reconstruct it from my mind. I just wanted to paint it as it felt. Even though my paintings are about the Mojave, I’ll leave things out to convey a stronger feeling.

An old bus: I was driving through the desert coming through Baker. Leaving Mojave Preserve. There were poor people living in this bus…

The desert light: It’s blinding. It’s absolutely blinding. When my eyes are consumed with that light it brings me right back to when I lived in the desert. I remember walking and looking at the ground constantly.

With all the dreamlike references, I’m surprised when he tells me the painting that looks like Mt. San Jacinto really is San Jacinto. He was in Desert Hot Springs looking for back roads into Joshua Tree when he turned around and saw this big mountain. “I looked out through the Valley and I thought, holy cow, look at that mountain. It’s almost like a beast, like a sleeping beast.” 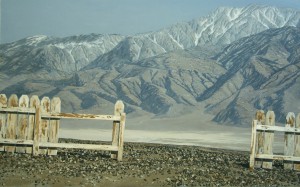 The Gateway (Part I)

The ongoing series of paintings from Mojave memories is called Earth’s Sharp Edge and has been displayed in two shows at the Evoke Contemporary Gallery in Santa Fe. Francis has also recently shown his work in Philadelphia and Asheville, NC. He wants to take his strong feeling for the desert to places where they don’t have deserts. I tell him the Palm Springs tourist board should pay him to be an ambassador of our Valley. What better promotion than one of Francis’ dream trains?

Now 42 and living in Orange County, Francis comes to Palm Springs to visit friends (he’s never seen the Salton Sea or traveled south of Indio) and has toyed with the idea of moving to the desert. But he doesn’t want to upset the stream of images. “There’s part of me that wonders if living there might steal some of the mystery for me because a lot of what I’m doing comes from memory.”

Normally I’m an advocate of the real desert: the rocks and heat and spikes. But in this case I’d say: Stay away, Francis, if that’s what it takes to keep the memories coming.