This article first appeared in the Early Spring, 2014, edition of  The Sand Paper, the newsletter of the Anza Borrego Desert Natural History Association (www.abdnha.org).

Faced with a field of spring flowers, some of us want to run the other way. The names confuse us, the profusion intimidates us. Fortunately for the phobic, Henry Mockel has some advice: Pick just one primrose. Forget the acres of color and find yourself a solitary bloom. Visit it daily. Observe as the colors cycle from morning to night. 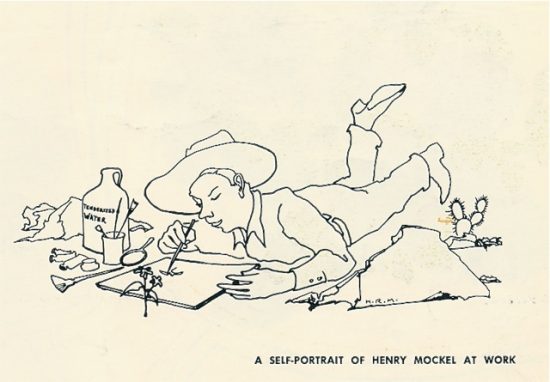 A renowned botanical artist, Henry once studied a Datura for an entire year. But you don’t even need to know the name “Datura”. “Erudition can become burdensome,” Henry says.

ABDNHA director Betsy Knaak and I share a fondness for this late flower-philosopher. ABDNHA has helped to keep Mockel’s name alive with exhibits of his serigraphs (a type of silk screen print) and sales of his popular notecards. Some years ago Betsy went to visit Mockel’s widow, Beverly, in 29 Palms and found his studio was preserved exactly as he’d left it–“like he’d stepped out to lunch”.

But something had clearly changed since Mockel’s heyday. The man’s personal story had faded from sight and few people seemed to remember him. What happened? It was my task to find out. 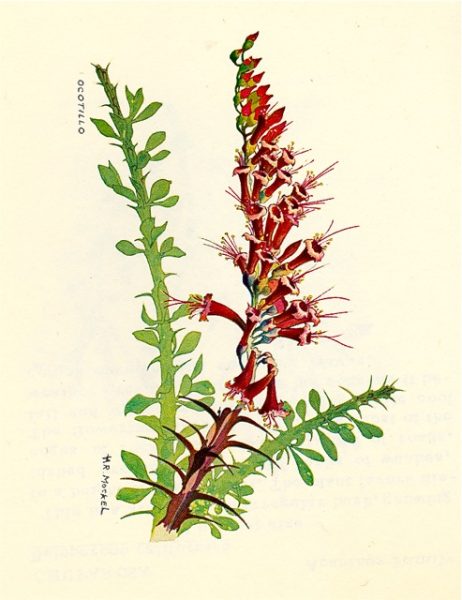 It was a good time for this venture as Mockel’s star is finally rising, along with the growing popularity of California wildflower art in general. Mockel was included in a major show on the subject—When We Were Wild—at The Huntington last spring. One of the curators, John Wickham, says he identified about 40 artists who depicted California’s wildflowers.

“Some, like Alice Chittenden or A.R. Valentien, painted wild flowers from all over California,” he wrote in an email. “Others, like Henry Mockel, Jane Pinheiro, Edward Stuhl, and Sophie Mitchell painted the wild flowers in their immediate area. Pinheiro focused on the Antelope Valley and Mojave Desert. Mockel was the only artist I’ve found, so far, who focused on just the low deserts.”

The first place I went searching for more on Mockel was 29 Palms. I spoke several years ago to Rosemary Brockway, the woman who owned the rights to his work after the Mockels passed away. (Mockel died in Joshua Tree in 1981; Beverly died in 1990.) But when I inquired recently, my one link to Henry—Rosemary–had also died.

Next in my search, I combed through Mockel’s Desert Wildflower Notebook and Hot Air From the Desert. Both books were self-published in a charmingly rustic format, with the Mockels doing their own typesetting, paste-up, cover-making and even stitching. Henry was a DIY guy, a modern bohemian who eschewed mass-production. 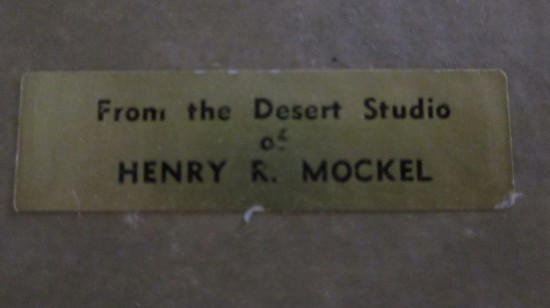 I learned Henry had studied philosophy in Germany before coming to the US, where he studied art at Grand Central School of Art. His early works were dark and industrial–the Bowery, a workman stoking a furnace. But when Mockel moved across the country (first to Calico Ghost Town) in 1957, the darkness was gone, replaced with one of life’s most hopeful subjects: desert flowers.

The Mockels opened the Pioneer Art Gallery in 29 Palms’ old Plaza in 1961. They lived in a 47-foot house trailer and camped everywhere in the California desert. Mockel wrote articles for Desert Magazine and drew charming cartoons of campers by the road. (His sketches are amazingly modern looking and rival his flower prints for staying power.) He painted landscapes, mining camps, ghost towns, kangaroo rats and nudes. One 29 Palms resident still has a nude torso of Beverly hanging over her fireplace. 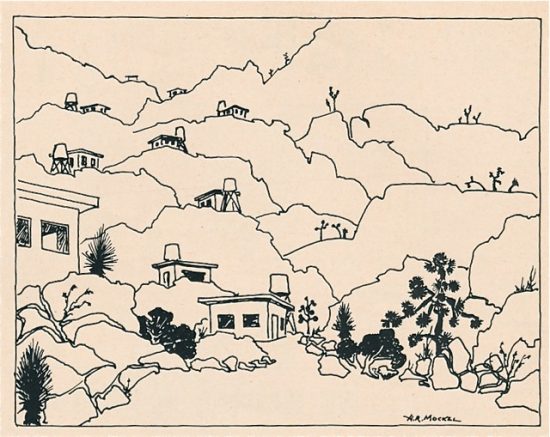 It was Mockel’s flower work that gained him prestige. In his prime he exhibited his flowers at the Living Desert, the Riverside Museum, the Palm Springs Art Museum and many other venues.

Tania Marien, an authority on botanical art, says Mockel belongs in the all-stars of the profession as his work appears in the Hunt Institute for Botanical Documentation collection; and he also participated in the 2nd International Exhibition of Botanical Art in 1968. “Being in the Hunt collection is a big deal,” she says. (For more on botanical art see Marien’s website: www.ArtPlantaeToday.com) 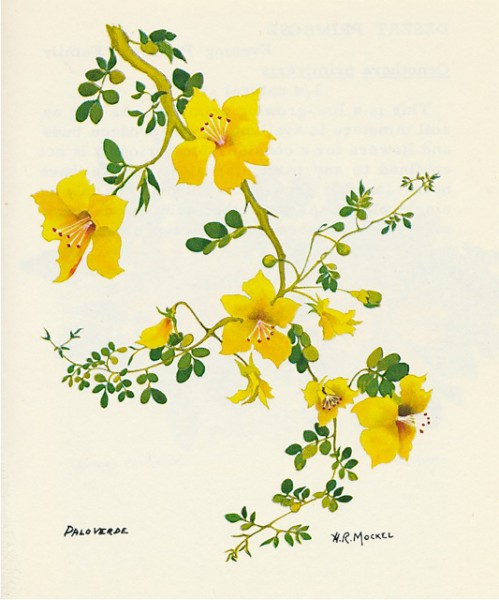 I hadn’t yet found anyone who knew Henry personally–but I had one remaining thread and that was Kathi Hilton, daughter of desert artist John Hilton (who once mined calcite in Borrego). Kathi had been part of the early 29 Palms art scene and so I called her at her home in Roosevelt, Utah.

To my “sincere delight” (a phrase Henry liked to use) she said she had known Henry Mockel well. Her dad bought paints at his store, and they visited in the apartment behind the shop where the Mockels lived for a time. As Kathi was learning the art of the palette knife (she and her father excelled in the technique) Henry Mockel showed her his own palette knives he made from bamboo and razor blades.

“He was really good to me when I was starting out as a painter,” she says. However, much of his encouragement came from behind a closed door. Henry would be in the back room hidden from view, and would talk to Kathi through the veil.

He was on oxygen, she says, and hated being seen in public with his oxygen tank. “It bothered him terribly; he didn’t want people to know.” He even turned down a major magazine interview because he refused to be photographed. While we don’t know for sure, it’s possible Mockel had tuberculosis–as many TB patients moved to the desert for relief–or mustard gas poisoning. 29 Palms historian Pat Rimmington says the town was a sanctuary for mustard gas victims from World War 1 and Henry apparently had served in that war.

My luck had turned at last, it seems, as Rimmington also knew the artist. She met Beverly and Henry at their studio on the Plaza in 1977, and remembers that Beverly barked at her on their first meeting (“Are you going to buy something or not?”), while Henry hid out in the back of the store. Beverly always had a “bug in her ear” about something. Years later after Henry died, Beverly—who never learned to drive–roped Rimmington into giving her rides everywhere.

“I get the feeling she was a little bit bossy?” I asked.

“A little bit??!” Rimmington said with a laugh.

Beverly was secretive about the family business–sales of Henry’s cards and serigraphs. She would not patronize the local post office but instead drove to the UPS office in Palm Springs every Monday. While there, she often visited her friend Patricia Moorten, founder of the popular Moorten Botanical Garden on South Palm Canyon Drive.

Clark Moorten—current proprietor of the garden and the son of Patricia and “Cactus Slim” Moorten—has a vivid memory of the overbearing Beverly Mockel, but none of Henry, though he must have met him many times. Henry’s flower portraits were superb, Moorten says: “He was remarkably accurate.”

So now I have two theories as to why Henry dropped from view. Both are speculation, but biographical speculation is permitted these days. Henry may have been reclusive because of his disability, or he may have been driven into obscurity by his domineering companion.

Regardless, Henry is back from the shadows and ABDNHA intends on keeping him that way. In a recent development, the Nature Center is receiving a large collection of Mockel’s work, donated by Eric Wilcox. Eric’s father, Bill Wilcox, was a house painter in 29 Palms in the 1960s. The elder Wilcox loved desert art more than money, apparently, because he often painted houses in exchange for paintings. 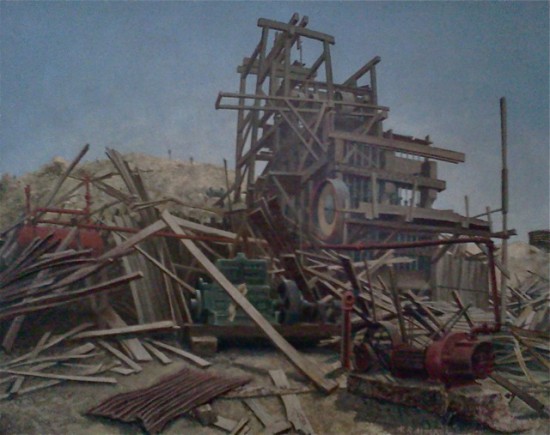 Eric was just a boy at the time, but he remembers Henry Mockel as a professorial man with a heavy German accent and an almost intimidating intelligence. “Of all the artists, all the people my father worked for, he really admired Mr. Mockel the most,” Eric says. 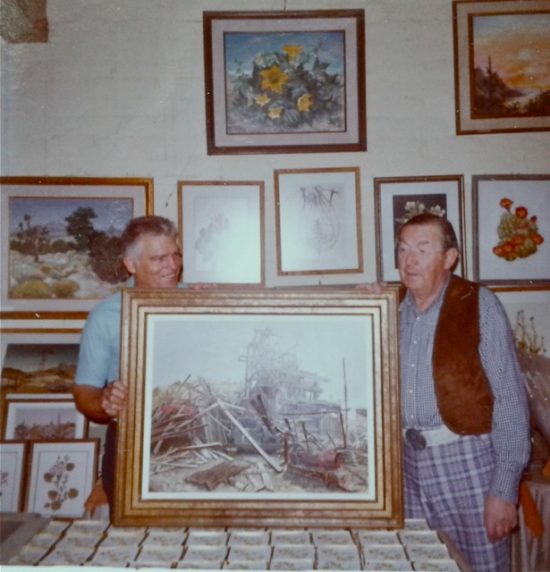 So as you contemplate the bloom—if any–this season think of that brilliant German philosopher. Or rather, be like Henry: a man who never plucked flowers (“I can’t evince any enthusiasm over a cadaver”) and approached the tiny beings down on his belly, with an unwavering attitude of sincere delight.

← Through the Red Rock Doorway: A Q&A With Erin Hanson
John Frost: A Quiet Mastery →

17 comments for “Henry Mockel: The Philosopher of Flowers”