Ed. Note: Gary Fillmore’s’ new book Shadows on the Mesa explores the interactions of artists who visited the Wetherill-Colville Guest Ranch in Arizona in the early 1900s. Among them are painters who also worked in the Coachella Valley: Clyde Forsythe, Carl Eytel, Ferdinand Burgdorff, Maynard Dixon, Guy Rose and others. Many artists made regular pilgrimages from the California desert to the Arizona Navajo lands. In this excerpt, Gary Fillmore looks at two such pilgrims: Jimmy Swinnerton and Bill Bender. 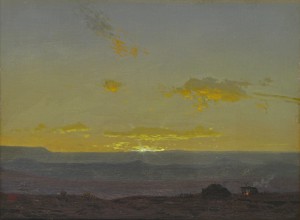 James Swinnerton spent every year from 1906 until the late 1950s in much the same fashion. In 1938 his fifth wife, Gretchen, wrote “Each year from the first of June until the latter part of July, desert fever stirs our household with a grip stronger than an octopus … Why I do this each year I have never been able to figure out because it’s the same trip, same road, auto camps and climate, and has been for the last several years ….” She added that the two had decided to “tour Old Mexico next year, and I’ll keep my fingers crossed until summer comes again,” but concluded “I know Jimmy, and we will see Arizona again next year.”

Yet there is little doubt Gretchen, an amateur artist, also held a strong affinity for the Kayenta area. One of her guest book inscriptions consisted of a skyline sketch of Monument Valley, captioned by a simple challenge. “Try and paint it.” In another she expressed her feelings for the hosts. “Each trip here deepens my regard and respect for these mighty fine people. The Wetherills and Mr. Colville.” 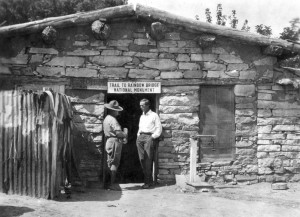 Swinnerton’s marriage to Gretchen would last almost forty years – nearly twice as long as his first four marriages combined. But the union had abruptly ended his sketching trips with Buck Weaver. According to Bill Bender, Swinnerton’s sketching partner in later years, “Buck didn’t like” Gretchen “butting in and the two of them never got along…to make it even worse she wouldn’t allow Buck on the property.” 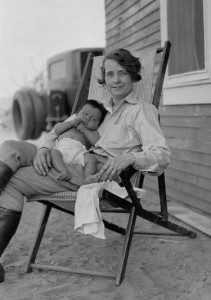 Bender was a working cowboy turned artist who as a child “idolized” Swinnerton and his lifestyle. Nearly sixty years later he recalls the sketching trips as rather routine. “I can say Jimmy and I wore out three cars and did a heap of traveling together … Most always the same places, year after year. Although he was a great story teller and kept the folks spellbound, he and I never exchanged too much conversation as he liked to travel fast. Consequently with the windows down (and) no air conditioning the noise didn’t make for too much conversation. Then when we sketched he was concentrating on the subject and even spoke less. However we did talk but mostly about trivial things such as the weather, the landscape or those people on TV.”

Bender recalls his first trip to Kayenta with Swinnerton as occurring in 1948. The roads were still unpaved. After leaving Flagstaff the pair would always stop at Cameron, where they would park the car on high ground, throw their sleeping bags along side the car and cook steaks over an open fire.

Bender recalls one memorable day at Gouldings when a small plane landed on the runway near the lodge. Later that day, while everyone was waiting for the evening meal to be served, he heard Swinnerton let out a loud “Whoop!” The plane’s pilot had known one of the doctors who had given Swinnerton a diagnosis of one month to live nearly fifty years earlier. The pilot informed Swinnerton of the doctor’s death, which meant Swinnerton had outlived all three of the Hearst paid specialists who had predicted his demise in 1906.

In time, Swinnerton would concur with Dixon’s viewpoint that many of the modern movements had made worthwhile contributions to the art world, although he sarcastically derided many of them as ending up in their proper place: furniture, industrial design, and architecture. Still, in a 1951 Arizona Highways article he expressed the belief the influences would remain long after the school was forgotten.

The last Sunday edition of Little Jimmy, which launched Swinnerton to international fame in the early 1900s, ran in 1958. Although it marked the end of his storied career as a cartoonist he remained on the Hearst payroll until his death. Swinnerton’s last paintings were created in the early 1960s. He continued to sketch but lamented that his hands were no longer steady enough to produce quality work on canvas.

After Swinnerton married Gretchen Richardson in Las Vegas in 1933, the couple moved to Los Angeles. For years Swinnerton kept nudging his wife to return to the desert and in 1965 they purchased a house in Palm Desert, California, just off the Palms to Pines Scenic Byway (Highway 74). He viewed the rapid growth of the Coachella Valley’s communities with a certain amount of amusement, commenting to author Ed Ainsworth “When I first went to Palm Springs, most people in the United States thought the desert was the worst place in the world. For fifty years I’ve been kidded or prodded for trying to educate people to make them realize the desert is a place of beauty. Now you should see ‘em! I sat on a little hill down by Point Happy not long ago on a Sunday – the roads to Indio, Palm Springs, La Quinta, Indian Wells, Palm Desert were clogged with cars. Old ladies, men, kids were running around with color cameras and paint brushes oohing and ahing over the desert. They’ve just discovered it.” 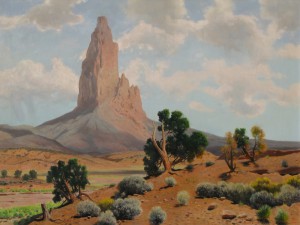 Although his health no longer permitted the long trips to Monument Valley, the area remained on his mind. A Canyon Kiddies sketch which includes Little Jimmy, drawn in 1967 for a friend known only as “Linda,” has a profile of his favorite landmark, Agathla Needle, featured prominently in the background.

Around the same time, Gretchen Swinnerton summarized her husband’s life. “He is the only person I know who managed to have his cake and eat it too. He went through life doing what he liked to do and earned a living at the same time.”

Swinnerton himself observed his work was intended to “… show my appreciation for the wonders about me. I can call attention to others to appreciate those wonders, and when they can appreciate perfection in nature and never stop looking for it, I have accomplished my purpose.”

He had spent over five decades of his long life trying to convince people the land he loved, which had saved him from a certain death, was something much more than just a “dry heck hole.” He had succeeded.

Although his birthday parties tended to be lively events, attended by celebrities ranging from Walt Disney to Leo Carrillo, for the most part he lived out his years quietly. After he passed away on September 5, 1974, he was buried in Cathedral City in the heart of the Coachella Valley, not far from where he had come to die nearly seventy years earlier.

Gary Fillmore is an art appraiser, independent scholar and owner of the Blue Coyote Gallery in Arizona. One of the foremost experts on California desert art, as well as Arizona art, he has written books on Marjorie Reed and Jimmy Swinnerton. His new book Shadows on the Mesa: Artists of the Painted Desert and Beyond is a must for fans of desert and Western art. For more info:

4 comments for “Jimmy Swinnerton and Bill Bender in Monument Valley”