While Barbara Harmon and her husband Cliff are being honored this season as pillars of the Taos arts community and the Taos Moderns, you can bet Barbara’s thoughts will sometimes drift to a different desert and another time. 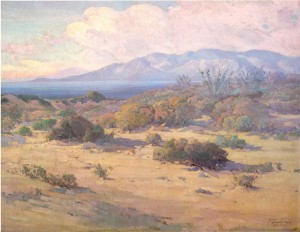 Barbara was just six weeks old in 1927 when she first rode out from Glendale to the Coachella Valley with her father Fred Grayson Sayre. Their destination was the Barker Ranch, home of Harmon’s mother Ruth. (Ruth’s family were pioneer date ranchers in the Valley since 1905.) The Sayres stayed in a cabin called the Paint Shack. Fred Sayre would roam out daily to the Orocopias and the Salton Sea with his sketch buddy, Laguna painter Theodore Jackman. 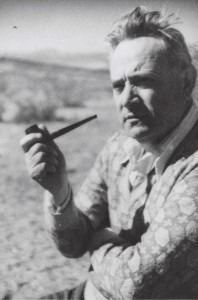 At the end of the day Sayre—among the most elegant of the California desert painters—told young Barbara tales of fairy Queen Tatiana and her adventures with a rabbit and a bear. “He would just make the stories up,” Barbara says. The tales she heard under the date palms would inspire Barbara Harmon’s own art her entire life.

The happy times in Thermal lasted only until Barbara was 11. Then Fred Sayre died; his wife Ruth died a year later. Barbara went to live with relatives. She later married modernist artist Cliff Harmon, built an adobe house in Taos and became known as a painter of fantasy and fairy tale scenes. Despite her full life since leaving the desert, she was eager to revisit the Coachella Valley days in a recent phone interview. 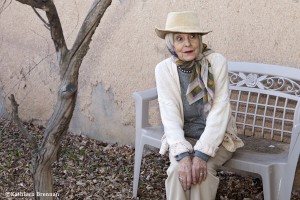 F. Grayson Sayre (as he signed his paintings) was born in Medoc, Missouri in 1879. “His last year in high school he sent for a correspondence course in pen and ink,” says Barbara. “It opened up a whole new world for him.”

Sayre moved to Chicago where he was accepted in the prestigious Palette and Chisel club and met fellow members Victor Higgins, Edgar Payne and Walter Ufer. In 1915, the rising star in the art world was abruptly felled by the Chicago diphtheria epidemic. His doctor gave Sayre only months to live.

The entire history of desert art is intertwined with sickness. Many painters, such as Jimmy Swinnerton, Gordon Coutts and others, first came to the desert to convalesce. Fred Sayre retreated to the Coachella Valley, to the date ranch belonging to his second cousin, Ben Laflin. (Laflin remains a familiar name in the Valley. Patricia Laflin, married to Ben Laflin, Jr., is one of the Coachella Valley’s best-known historians.)

“He stayed for two years with Ben Laflin,” says Barbara Harmon. “He didn’t paint at all. He just rested under the palm trees and looked out at the desert. When he got his strength back he began painting and kept on for 25 years. He knew the desert so well in all its moods that it was a part of his consciousness. ” 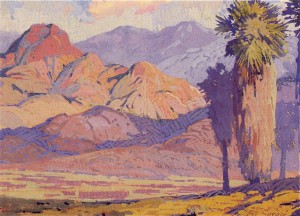 Once he was well, Sayre courted Ruth Barker, sister of date ranchers Bob and Frank Barker. The couple was married in 1926 and Barbara was born the next year. The years that followed left Barbara with good memories of the California desert. Her father took them to places like Box Canyon and Biskra Palms. He also painted farther afield: Laguna Beach, La Jolla, Monument Valley and Lone Pine.

East of Indio one year Barbara remembers: “The lupines were as tall as I was.” During those years the family crossed paths with famous painters like Guy Rose, Nicolai Fechin, Hanson Putfhuff, Jack Wilkinson Smith, Edgar Payne and Jimmy Swinnerton.

Barbara said the desert gave her father back his life, and it certainly gave him his style. According to Laguna Beach gallery owner Ray Redfern, Sayre was a master at capturing wind, light and vibration with his short brush strokes. “Life, beauty and motion,” define his work, wrote Redfern in an essay for a 1987 catalogue.

Sayre helped found the California Watercolor Society and co-founded, with Joseph Kleitsch, the Painters and Sculptors Club of Los Angeles. The family was living in Glendale and making plans to move full-time to the Coachella Valley when the artist died suddenly in 1939.

After her mother also died, Barbara was caught up in fashioning a new life with a new family. The fields of desert lupine must have seemed like a distant dream at times. Barbara came to Taos in 1947 and studied with Emil Bisttram, a founder of the Transcendental Painting Group that included Cathedral City’s Agnes Pelton. She married fellow student Cliff Harmon, known for his modernist Southwest landscapes.

In the years following Fred Sayre’s death, he never had a big splashy exhibition, yet he quietly became known as one of the most elegant desert painters. Barbara would like to see a Sayre retrospective staged in the desert her father loved. She hopes to return to the Coachella Valley to visit the places her family once lived and played.

One couple who will welcome Barbara back is Pat and Ben Laflin. Sayre had given Ben Laflin, Sr. some paintings in exchange for his stay at the ranch. Pat and Ben Jr. inherited several large Sayre landscapes and display them in their home. “My favorite is an oil painting of Sheep Mountain with cottonwood trees in fall colors in the foreground,” says Pat Laflin. “We also have two of the Salton Sea. Fred’s sister, Viola Sayre, also did beautiful work and we have two of her small oils of sand dunes and wildflowers.” 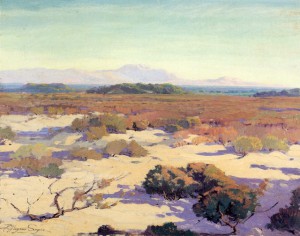 The old Barker Ranch, near PGA West, is gone now and the date groves and sand dunes are paved over with golf courses and gated communities. The altered landscape will be strange to Barbara. It should make her feel right at home, though, when she is introduced to Pat Laflin’s grandson and hears his name for the first time: Sayre Laflin.

Tributes to Barbara Sayre Harmon continue this summer at these events: