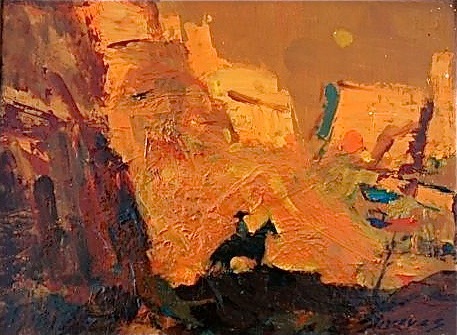 Shari is working with Shreve’s 97-year-old brother, Rollie, to document Shreves’ life and work. Paralyzed due to a botched spinal tap when he was in the military, Shreves didn’t like to sell his art so it just piled up in his home. For years after the artist’s death, his paintings languished in his brother’s basement and are only now being excavated. The artist was buddies with Burt Procter, another desert painter recently featured on California Desert Art.  Check eBay for Shreve’s work; Shari is displaying new items from the collection each week.

Desert art expert Gary Fillmore has always been irrepressible in his various interests–appraiser, art dealer, mechanical engineer, non-fiction author, etc.–and it’s no different now that he’s recovering from a serious illness. Rather than scaling back, he’s taken on the additional role of novelist. Visit his blog for updates on his work in progress, Moonlight Water, about the Navajo Long Walk. He gathered some of the background while working on books about Marjorie Reed and the artists of the Wetherill Trading Post. All of Gary’s work shows the deep connections between Western history and art.

The roving painter Jim Toenjes has moved on from an old ranch in the Mojave and is now hanging out in Quartzsite, Arizona, home of the most freewheeling gem and mineral show in the West. 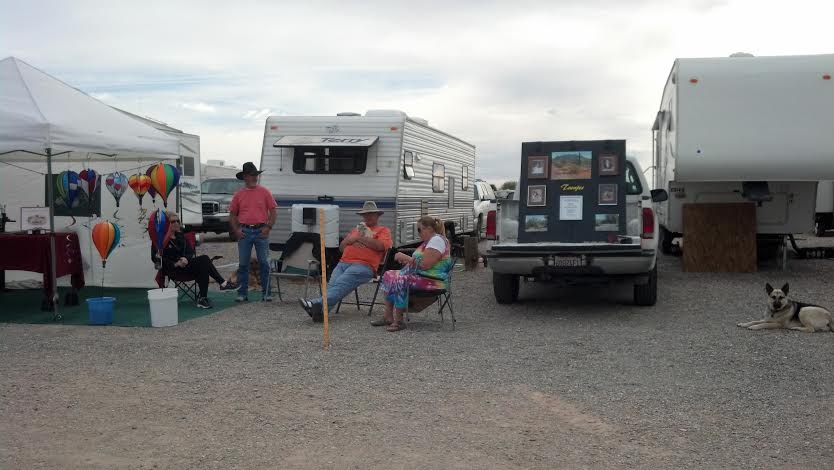 A million or more tourists will swarm the small town this winter and Jim and his paintings will be there to greet them. He writes: “Business is about to pick up they tell me right after Christmas. I have my setup which is truly minimalist for the area. No tent but only a folding display board in the bed of my truck, painted grey with paintings attached to it. I am working the crowds as a performing painter at my easel–out by the street in front of my display. I hope I don’t get knocked down when it gets busy.”

Fans of desert art will find many links to the desert in this exhibit, including works by Agnes Pelton and Helen Lundeberg. 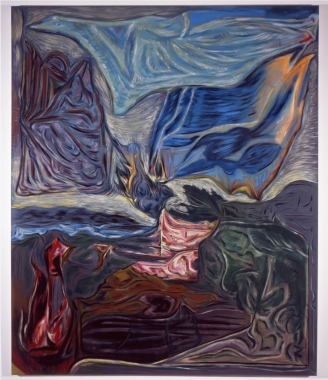 From the press release: “One of the recurring themes in California art over the past century is the relationship between abstraction and landscape. Particularly in Southern California, a deep schism opened up in the 1930s between naturalist landscape painters and those of a more modernist inclination, and the breach has never entirely healed. This exhibition of more than 100 artworks taken exclusively from OCMA’s collection analyzes the evolution between these various schools.” Through March 9, 2014.

The San Diego History Center and Oceanside Museum of Art collaborated with local art scholars to produce this two-museum art exhibition. Some 30 regional artists look at the local landscape. Because much of San Diego county is desert, you’ll find plenty of desert painters here–including Carol Lindemulder, a Borrego Springs artist recently featured on this website. Listed closing dates vary so please check with the museums before making the drive to San Diego.

Desert artist Victor Schiro appears in the sixth annual Art About Agriculture exhibit at the Santa Paula Art Museum, through February 9, 2014. There’s a long history of agricultural art in the Coachella Valley desert as well, and increasing interest locally in staging an exhibit like the one in Santa Paula. 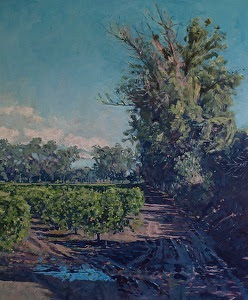 While desert artists are flourishing in exhibitions elsewhere, our local celebration of desert art, Desertscapes, has been canceled for 2014. Over the last four seasons the event has helped to educate residents and visitors about the rich history of landscape art in the Coachella Valley. To return next year, the event needs leaders with a commitment to the art and landscape of the desert.  Do you know the names Swinnerton, Hilton, Masters and Mathews? Can you tell Mt. San Jac from San Gorgonio? Want to share your love with others? If you want to get involved, please contact this site (annjapenga@gmail.com) or Deborah Schwartz at the City of Palm Desert.

Jim Trolinger, a booster of Death Valley plein air painting, sent a briefing on his paint-out at Death Valley in November. He includes this useful observation (Jim Toenjes take note): Use those tourists. 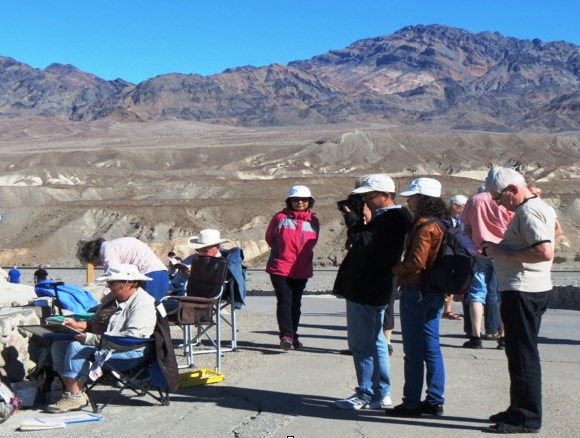 “Plein air painters often become extra entertainment for tourists and this day was no exception as bus loads of tourists visiting Zabriskie Point photographed and spoke with the artists. Many plein air painters sell more art ‘off their easels’ than in shows….We took advantage of the tourists, asking them to vote and help pick the winner of the prize for best painting,” Trolinger writes. 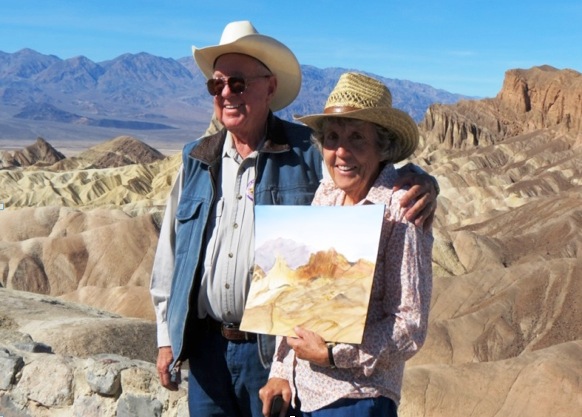 “The winner of the first place $100 prize was Sharon Tueller, who managed the paint-out with the help of her loving husband, who helped her with the climb, brought up her equipment, and sat with her as she painted.”

When Steve Reiman’s father died, the Yucca Valley resident found several paintings by the late Desert Hot Springs painter Irene Scoggin Bertrand among his belongings. Born in Riverside, Bertrand worked in costume design at MGM and later became a painter of Western and Native American scenes. She was a member of Women Artists of the West and the Shadow Mountain Palette Club, a Palm Desert club that claimed many important desert artists as members.

If you know more about Irene Scoggin Bertrand or are interested in purchasing the paintings, contact Steve at: steverforlife@gmail.com 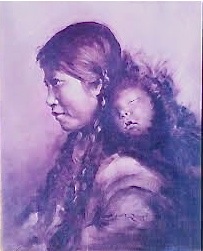