The Blue Coyote Gallery (Gary Fillmore’s gallery in Cave Creek, Arizona) and the Grand Canyon Association collaborate to present Canyon Magic, an artistic appreciation of “the world’s best known chasm”, now through June 10, 2010. The show is at the historic Kolb Studios on the South Rim of Grand Canyon National Park. The studio, dating to 1904, was home to the river-rafting photographers, brothers Emery and Ellsworth Kolb. 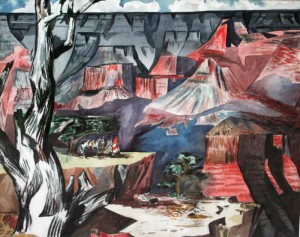 Canyon Magic will appeal to readers of California Desert Art because many of “our” painters also ventured to the Grand Canyon—Paul Grimm, Edgar Payne, John Hilton, Hanson Puthuff and Jimmy Swinnerton, among others. The desert painters roamed an informal circuit that included Yosemite and the Sierras, Laguna Beach, Carmel, Santa Fe, the Navajo lands and the Grand Canyon. Fillmore says artists were challenged to paint the Canyon because it’s a natural wonder of the West, and one of the most recognizable landmarks anywhere.

Included in the show are artists connected with the Taos Society, Santa Fe Railway artists, women painters of Arizona, as well as California impressionists and watercolorists.

The exhibit stems from Fillmore’s work with art collector David Picerne. Along with Canyon Magic, their collaboration has resulted in the Arizona Centennial Landmark Art Collection (http://azlandmarkart.org), an historical archive of Arizona painters. 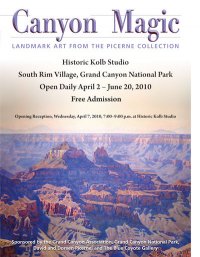 The Grand Canyon exhibit is featured in a new book, Canyon Magic. To order see:

← Desert Art Center: Clubhouse of the Legends
Faces of the Frontier in San Diego →