An institution that nurtured generations of Smoketree painters—the Desert Art Center—celebrates its 60th anniversary this year. This is not some moldy shrine to art history; it’s a working co-op gallery in downtown Palm Springs. Located at 550 North Palm Canyon, the center is a warm, light-filled space housed in the old Frances Stevens School. You can go next time you’re in town and see works by contemporary artists while soaking up the vibe of the early giants. 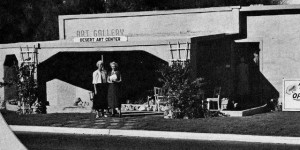 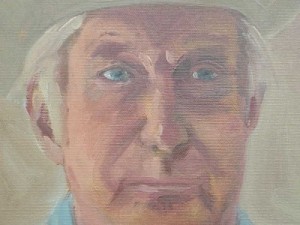 Self-portrait by Darwin Duncan, a former member of the Desert Art Center

Many of the names on this list also belonged to the other major artists’ hang-out in the Valley–the Desert Southwest Art Gallery in Palm Desert (74225 Highway 111 in Palm Desert). This is no longer an active gallery but today houses LG’s Prime Steakhouse. The building was home to the style-making  Desert Magazine, which also operated a book shop and art gallery to promote writers and artists from their pages. Both the magazine and its artists helped define the mystique of the California desert for the nation and the world. 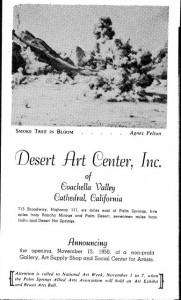 The painter Edna Hollinger, who died in 2009, was a former president of the Desert Art Center. As a young painter, she trekked the canyons with many of the aging legends. Shortly before her death, she recalled two things about the early days of the Center: The painters took their work very seriously, but didn’t take their own status so seriously at all. There was no competition, no jealousy, she said, just a shared desire to improve their artistic chops.

Reprinted here is an article from Palm Springs Life (February, 2008) on one of the Center’s traditional paint-outs–a walkabout with brushes and poodles. For more on the Center, see: www.DesertArtCenter.com. 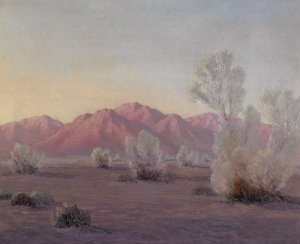 Paint-Out in the Desert

On a bright January day I followed a poodle in a red sweater through the sandy washes of Box Canyon near Mecca. I had to keep an eye on the pooch at all times if I didn’t want to lose sight of the painter at the other end of the leash.

A painter on a paint-out (a communal outdoor painting excursion) is as engrossed as a monk in walking meditation. The poodle’s owner, Louise Tennyson, meandered up gullies and down washes, oblivious to anything but the angle of the winter sun illuminating the smoke trees.

I was here to learn how a painter sees the landscape and also to experience a venerable tradition–the monthly paint-outs of the Desert Art Center, established in Palm Springs in 1950. The center is one of the most influential and undersung institutions ever to grace Palm Springs. In almost 60 years of existence it has fostered the careers of dozens of landscape painters whose work is now in demand by museums and collectors—folks like John Hilton, R. Brownell McGrew, Fred Penney, Wilton McCoy, Jimmy Swinnerton and Sam Hyde Harris.

But the center is hardly a relic. It continues to operate as an artists’ co-op and gallery in the old Frances Stevens School near the corner of Alejo and Palm Canyon. Next time you’re having a mocha at Koffi, wander across the street and investigate the on-site painting classes as well as the legendary paint-outs that whisk painters off into the dunes and canyons, where they seem to belong.

I knew I’d like the paint-outs when Louise Tennyson told me there’s no boss and no rules. You don’t even have to have to be an artist to come along. That was my invitation.

When I showed up at Box Canyon, painters were scattered here and there–within eyeshot of each other but otherwise alone with their easels. At lunchtime, they ambled back to their cars and everyone swapped morsels and told stories of painters they know. Edna Hollinger, an early president and accomplished painter, still lives in Palm Springs. Sally Ward, now 98 and living in a Tucson rest home, still paints every day. (Ed. Update: Hollinger died in 2009. Sally Ward is now 100 and still painting.)

The painters may change from year to year but the places stay the same. Box Canyon was a favorite of Jimmy Swinnerton’s in the 1950s. Louise Tennyson learned where to paint-out from late artists such as Darwin Duncan and Karl Albert. She can show you a little park in Indian Wells where you can view the serrated mountains without the distraction of development, just as Fred Chisnall or Carl Bray did a half century ago.

The Desert Art Center got started when the now-famous Agnes Pelton donated a smoke tree painting as a fund-raiser. The first president was Palm Springs’ flying great-grandmother, Zaddie Bunker.

The oldest nonprofit in the Coachella Valley, the center moved a few times before settling into its present quarters. At the time, the painters never realized they were part of a desert painter’s movement. But today these artists are coming into their own, just as the Carmel and Laguna landscape artists did before them. On the day I wrote this there were 39 bids on a John Hilton painting on eBay—just one gauge of the growing popularity of the desert artists.

Carl Bray, the beloved painter of smoketrees and railroads (formerly of Indian Wells; now he lives in Banning) was president of the club in the ‘50s. “Everybody that painted the desert seemed to belong to that group,” he says. “It was kind of our guidepost.”

33 comments for “Desert Art Center: Clubhouse of the Legends”