June 22, 2019–In the days when the Palm Springs Art Museum included desert in their name, they featured an exhibit spotlighting three dune systems: the Salton Sea, the Coachella Valley and the Algodones Dunes. One of the artists starring in the 1983 show was the now-acclaimed Stephen Willard. 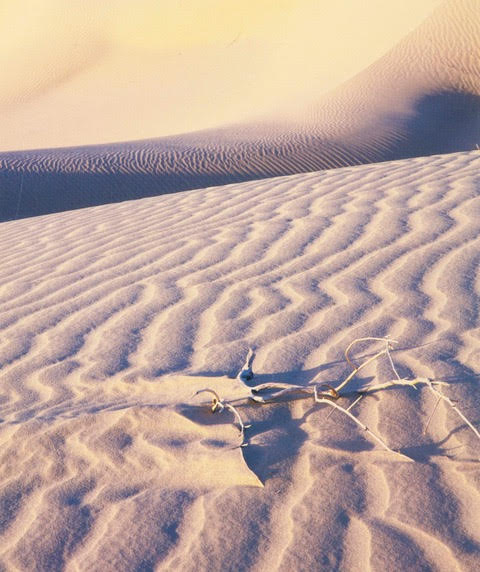 The other was George Service, a Pinyon resident who died in August, 2018. There’s little chance you know his work or his cinematic story, but for a time he was the leading nature photographer in the desert. His life was entwined with the first backroads jeep tours in California as well as the earliest days of the Living Desert. He belongs in the pantheon of Coachella Valley folk heroes along with Mike Dunn (builder of the Dunn Road) and search-and-rescue marvel Jim Maynard. But George’s renown faded, partly due to his need to make a living–as is often the case. This, then, is a reintroduction. 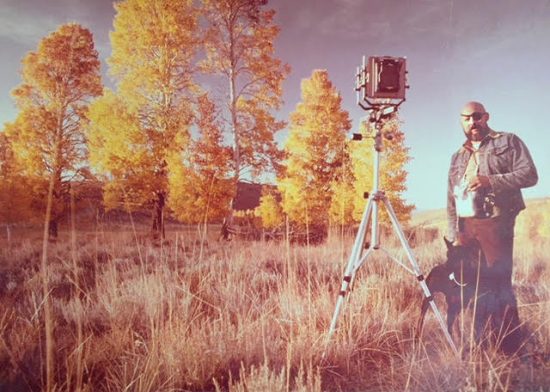 George Service with his studio monorail camera in the eastern Sierra. He always had a Doberman by his side.

George Service was born in 1942 to US Foreign Service diplomats Richard M. Service, Sr., and Helen Gardes Service. He grew up all over the world, in China, Russia, Belgium, the Netherlands and more. The black-tie state dinners he attended as a boy would give him polish–and a curiosity about cultural differences–to last a lifetime.

He went from prep school in Connecticut to Pomona College where he studied history, then dropped out senior year. Until then his life had been controlled and cosmopolitan. He was about to veer off the paved pathways. Driving his 1952 Willys Jeep to Death Valley, he landed a job at Scotty’s Castle. He camped all over the park, learning the plants and animals and teaching himself to drive off-road and take photographs–skills that would become central to his life. 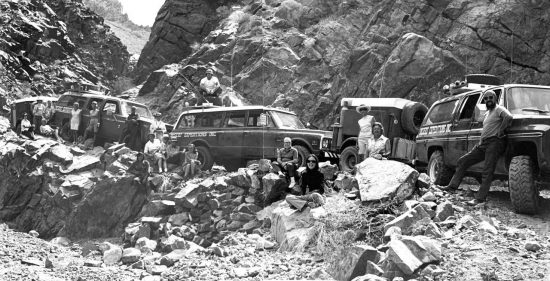 A Desert Expeditions trip in 1975, with George at right and Karen Sausman seated on a rock, in black shirt and sunglasses.

Next came a six-year career as a banker in Indio, Barstow and Palm Springs. The irrepressible individualist in George told him to move on again, so he began a business called Desert Expeditions, calling himself the Wagonmaster. He outfitted Chevy Blazers with 8,000 lb. winches and extra wide tires, 48-gallon water tanks and a rolling chuck wagon. While we’re used to seeing tourist jeeps today, in 1970 Desert Expeditions was the first licensed off-road tour company in the US. 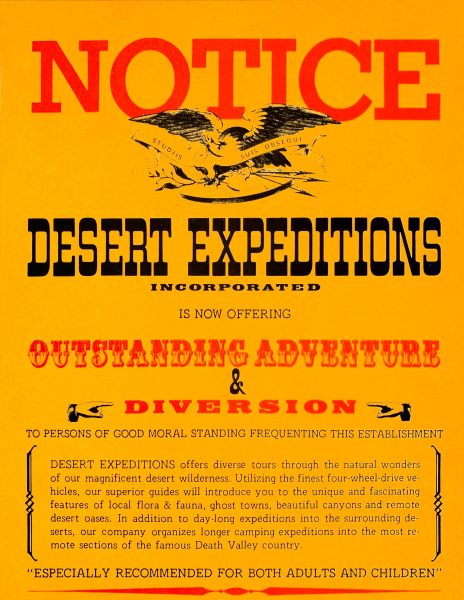 This was the era for desert discovery. The environmental movement was in bloom and so was hiking and landscape painting. Nature photography was at a zenith, due to the popularity of Ansel Adams and Sierra Club calendars. The original Desert Magazine (unaffiliated with the current Desert Sun version) inspired legions of new devotees. Just as people were craving a real desert experience, George Service came along promising A Way Out. (The slogan on his brochures.) 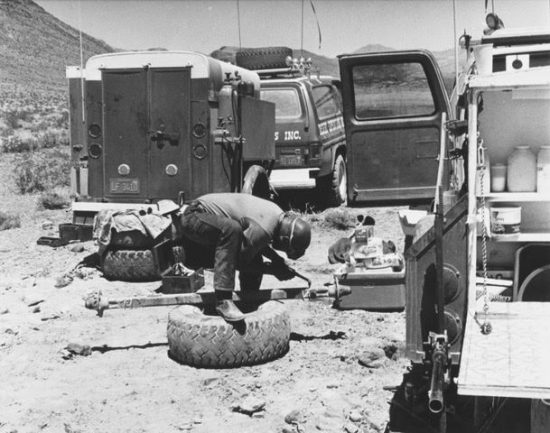 George making repairs in the field.

Out in the field, things were always going wrong and George–a former Boy Scout–was ready. He had trained with the Barstow Desert Rescue Squad and on the volunteer fire team in Pinyon. For mechanical repairs, he hauled an oxy-acetylene welding unit. He fixed broken axles in the field while guests snacked on the chuckwagon delicacies he cooked up. A visiting columnist noted that the group’s motto was: Let George Do it. (Because jeep touring was so new, the trips attracted journalists from Sunset Magazine, the LA Times, the San Francisco Chronicle and other outlets.) 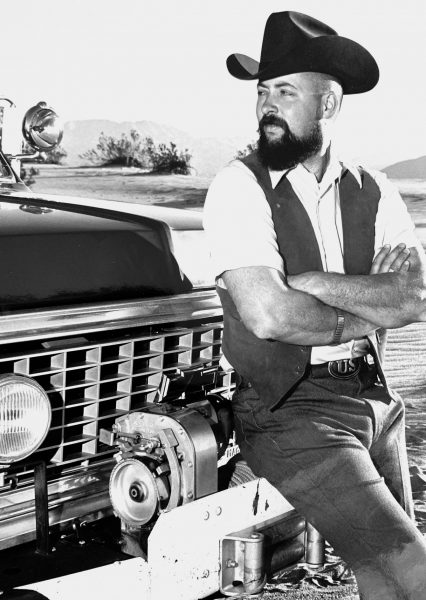 The wagonmaster’s personal style was part of the appeal. An erudite, articulate man who could hold his own at formal dinners, he looked like a ruffian with a pirate beard, cowboy boots and a shaved head–before the look was fashionable. George appeared even more roguish after a sandstorm in Death Valley in 1974 left him blind in one eye and sporting an eye patch.

He was shyer than his appearance suggested, friends say, and was driven by a need to share his passions. “George just had an exuberance for life,” says his former Pomona College classmate Jeff Bruce. “He could get quite excited about ships, about world history, model trains, gathering wood and playing chess. He did big stuff.” 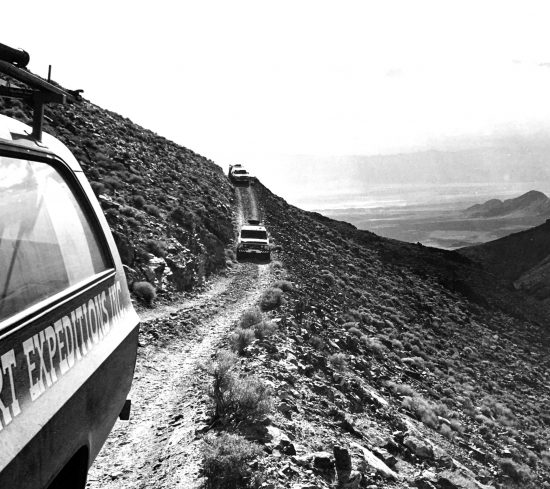 George Service, Edge of the Road

High on his list of Big Stuff was photography. He had been taking pictures ever since his Death Valley days, but his efforts  got a boost when he met Karen Sausman, then the only employee of the newly-founded Living Desert. Then a small wildlife preserve, the Living Desert would develop into one of the most successful zoos in the country under Sausman’s guidance. She served as President and CEO for 40 years.

When George approached Karen about offering jeep trips through the Living Desert, she agreed, but only if she could go along as a driver. “I convinced George I could drive stick and 4WD pretty well,” she says. 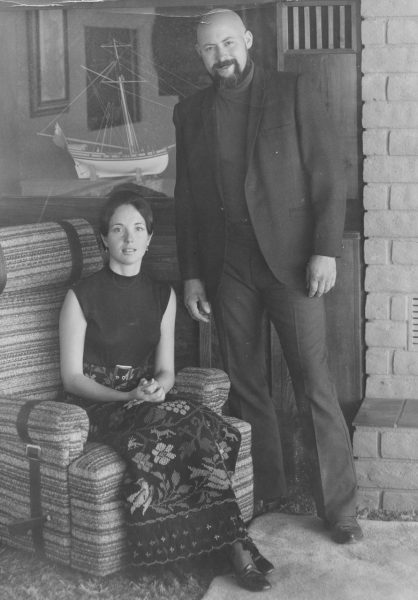 Sausman and Service were soon married and Karen began teaching George skills she’d learned in a previous job as a photographer’s field assistant. “I learned a lot of tricks about how to do stills using animal set-ups,” she says. At the time, she was building a photo library for the Living Desert. George and Karen began constructing miniature movie sets for their wildlife photos. 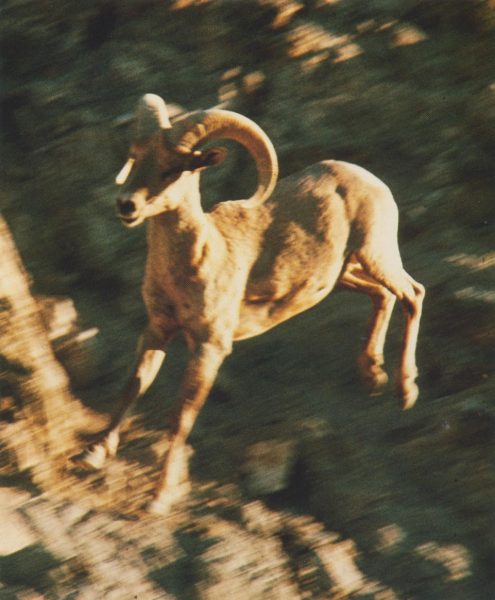 Sausman brought wildlife home to rehabilitate at the couple’s residence in Royal Carrizo–a small community on Highway 74 above Palm Desert. There were rehabbing skunks and baby coyotes in the yard, along with snakes and a sparrow hawk who attacked George’s bald pate while he was working.

George kept a pair of rosy boas in a terrarium on his desk. “They presented me with five little fellers ’bout the size of a pencil,” he wrote in a letter to his parents. “Karen snatched all the young ‘uns for the museum.” 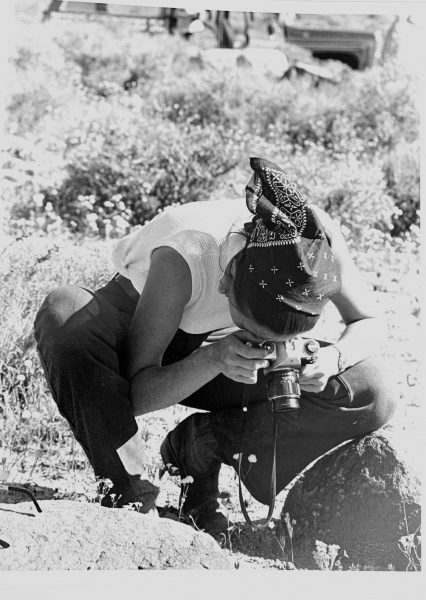 In addition to his wildlife photography, George began offering photography jeep tours through Desert Expeditions. One of his guest instructors was Lee Marmon, who then worked as a photographer for the Bob Hope Desert Classic. Marmon is today widely lauded for his portraits of tribal elders on New Mexico’s Laguna Pueblo, where he lives.

Around the time George was working with Marmon, he gravitated to large format cameras, purchasing a Calumet 5×7 field camera.  Ansel Adams was then inspiring widespread interest in large format and the slow art of landscape photography.

Along with Adams, George’s heroes were the masters of formal landscape: Eliot Porter and David Muench. “He never used any filters to alter or enhance the colors of his photographs,” says his wife, Patty Service. (He and Sausman divorced in the 1970s.) “He was adamant about capturing the beauty of nature in its natural light.”

To do justice to the desert light required supreme patience. “He would go out with his camera and his tripod and a book and his chair, and go back to the same spot four days in a row,” says his brother, Ric Service of Rancho Mirage. “That’s a lot of patience.”

The patience paid off as George’s work increasingly appeared in magazines such as Palm Springs Life and Desert Magazine, with clients including the Nature Conservancy and the American Museum of Natural History. His landscape photos were used to illustrate Frank Bogert’s classic: Palm Springs: The First Hundred Years. His photographs were displayed in Palm Desert City Hall, and he started selling a line of popular postcards.

In 1977, the Desert Expeditions’ insurance company caught on that George was hauling city-slickers out into the snake-infested desert. The company raised their rates 300% and the pioneering off-road outfit  was forced to close down. George then planned to make a living on commercial photography, but found it difficult. He took a job as Director of Operations at Las Casuelas Terraza, the landmark restaurant in downtown Palm Springs then owned by his brother, Ric Service. 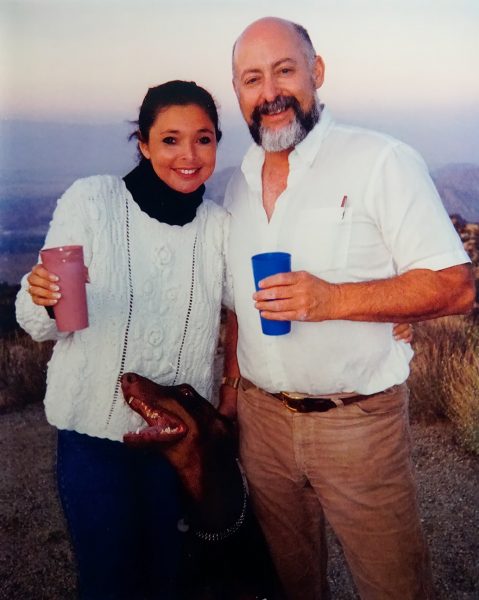 Patty Gomez Service and George Service on the Dunn Road. The couple hosted annual dinners for friends on the abandoned road above Cathedral City.

There he met his wife Patty Gomez, or “Patty the G.” as he called her to distinguish her from his brother’s wife at the time, Patty Delgado Service. Patty and George were married in 1998 by the late desert sage Bill Edelen. They would remain together until George’s death 21 years later.

George was married a total of four times, a fact noted in his obituary: “George loved women, and married quite a few!” His former wives–Patricia Fowler, Karen Sausman and Diana Evans–remained friends with George until the end of his life. As Patty Service said: “No one could stay mad at him.”

After he left the restaurant business, George discovered an encore career that encompassed his love of driving and the land. He was almost 60 when he took up long-haul truck driving. Once again, he had intended to return to photography, but instead began coaching truck-driver trainees on the open road. The novices were from all corners of the globe–Romania, El Salvador, Iran, Nicaragua–giving George a work-out for the diplomatic skills he learned as a boy.

He relayed his adventures to friends in a newsletter he called The Trucking News. Cherished by the recipients to this day, the newsletter revealed George to have literary chops in line with his skills as a photographer and wagonmaster. He exulted in “skipping smoothly up and down through a 13-speed transmission, matching engine torque to vehicle speed, running 80,000 lbs down steep grades….”

In the years before Alzheimer’s dimmed his radiance, he was channeling Least Heat-Moon as he hauled diapers to Toronto and kitchen cabinets to Houston. From his high perch, he admired the starbursts of small town fireworks shows, as he fiddled with the radio to bring in NPR. He taught his sidekick, a Dobie puppy named Dulcinea, to check the side mirrors. 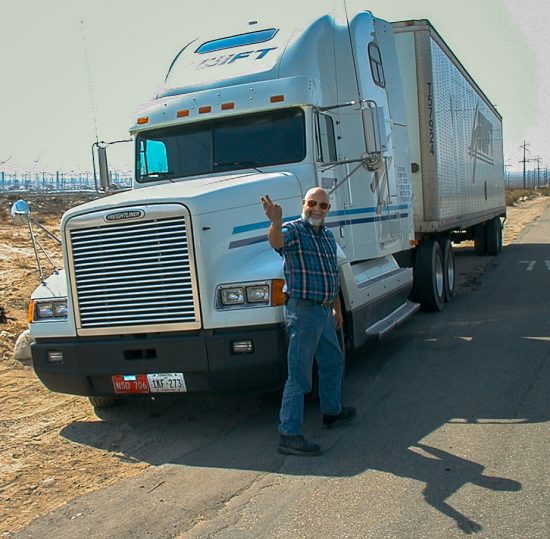 George Service in his encore career as a long-haul truck driver. Photo by Ric Service.

He riffed on the songs made by truck brakes and kept an eye out for wildlife. Climbing the east face of the Rockies at twilight, he spotted 15 Rocky Mountain bighorn churning through deep drifts. Karen Sausman says it was one of the happiest times of his life: “He could be a cowboy again on the road.” 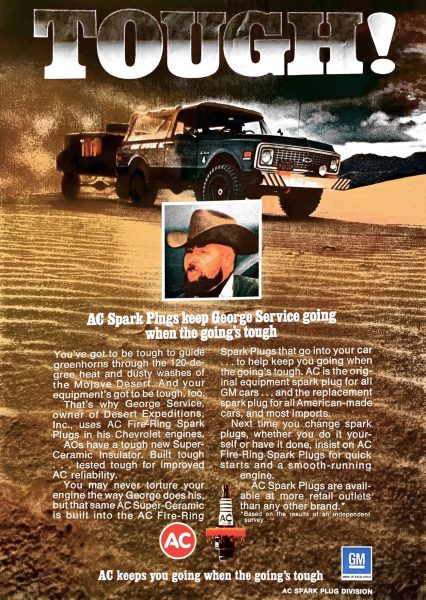 George Service was recruited for this AC spark plug ad due to his tough-guy image. 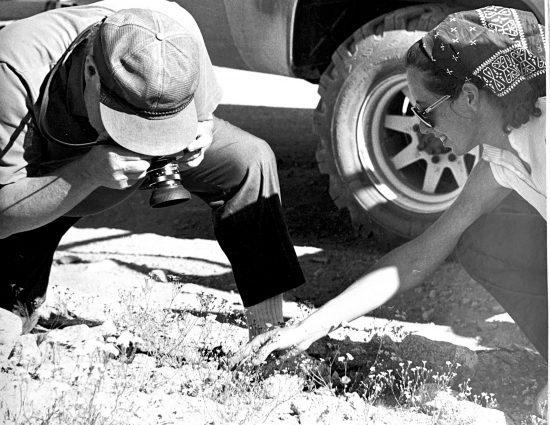 On Desert Expedition trips, guests were encouraged to get close to the ground to admire the belly flowers. Tour guide Karen Sausman at right. 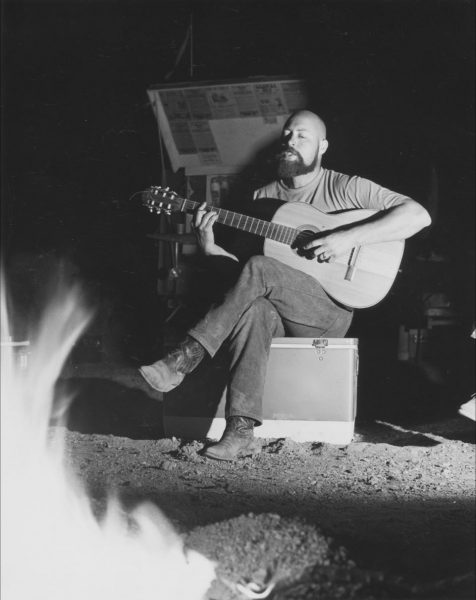 George entertained guests on jeep trips with his fine baritone and a repertoire of 200 American folk songs. 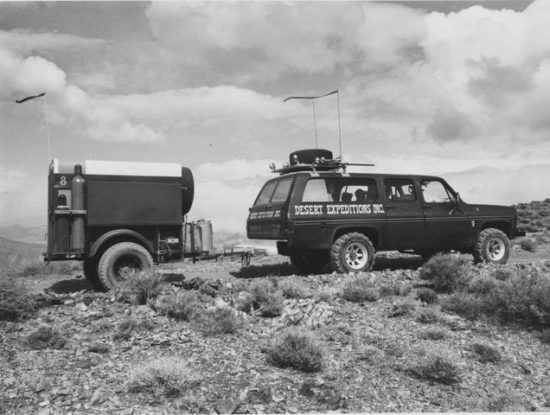 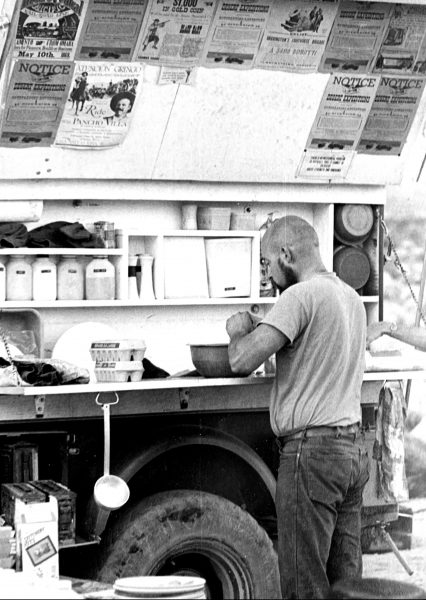 George was a good cook and kept trip guests well-fed from his custom-made chuckwagon. 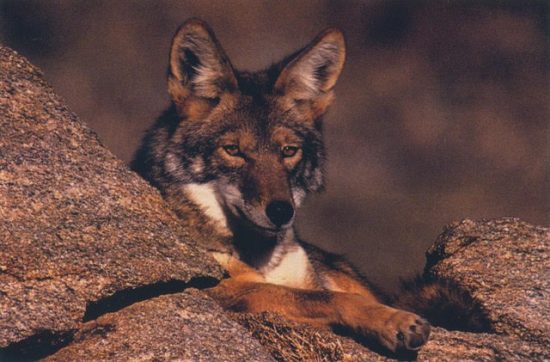 ← The Road Goes Ever, Ever On: Route 66 Photographs by Andy Romanoff
Awakenings: An Untold Backstory of the Agnes Pelton Renaissance →

23 comments for “Wagonmaster: The Backcountry Adventures of George Service”