March 12, 2019–Millicent Harvey and I stood on the bank of Araby Wash and surveyed a gutted expanse. Some carcasses of smoke trees were snagged under the Highway 111 bridge, but the dense grove–a favorite of painters and photographers for decades–was gone, a victim of the Valentine’s Day flood of 2019. “I feel like my house burned down,” Harvey said. 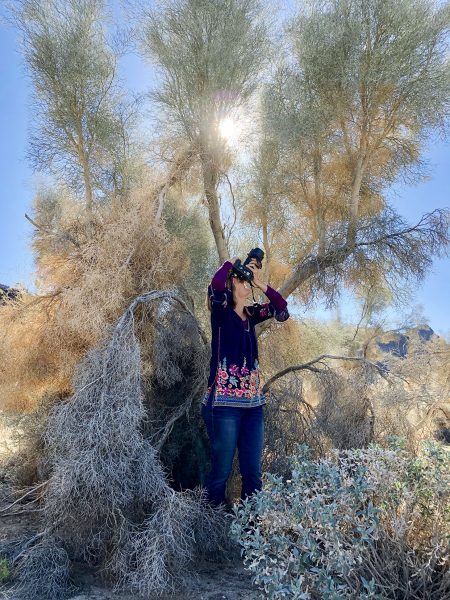 Millicent has photographed this family of smoke trees for eight years now, watching as the babies grew up and the elders grew shaggy. Like a lone anthropologist embedded with a remote tribe, she is one outsider who truly knows the secrets and legends of the colony.

To the dismal sound of bulldozers clearing debris, we walked over to greet a sole survivor that had been flattened but not yet uprooted. Millicent murmured “look at this poor tree”, as if comforting a frightened pet. On the way back to the car the photographer carried a gnarled smoke tree branch as a memento of her fellowship.  “I’ve seen a lot of washes,” she said. “I don’t think there will ever be anything like Araby for me.” 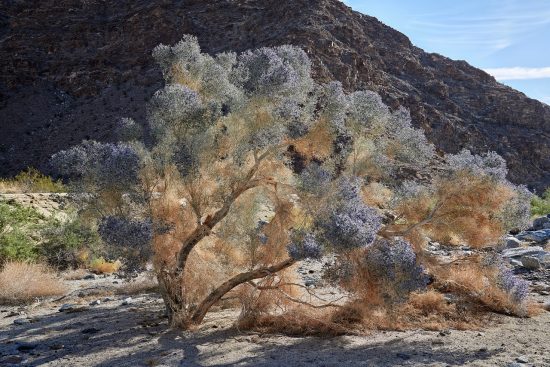 Rising from the devastation is Millicent’s loving portrait of her now-lost community. You can see her photographs at the Desert Painter Studio Gallery in April, 2019, when she teams up with her painter friend Terry Masters for the first-known tribute to the desert’s shape-shifting ghost tree.

The spiny trees have an affinity for washes and are confined mostly to our local desert. If you travel east or west, the population quickly vanishes. Along with Araby, they’re found in places like the Cathedral Canyon Wash and the Cottonwood entrance to Joshua Tree–populations also represented in the April exhibit.

For much of the year the tree is gray and nondescript but it bursts into dazzling indigo during the brief June bloom. The tree “seems to rejoice in torrid heat,” as naturalist Edmund Jaeger once wrote. Similarly, they love floods; a long taproot secures them against almost any downpour. All the more surprising that the February flood erased them.

Among the tree’s biggest fans have been desert painters. In fact it was smoke tree paintings by Larry Sitter and Agnes Pelton that first drew Millicent to the subject. The late Indian Wells folk artist Carl Bray found mystical symbolism in the bush–its flailing arms look like a person in the throes of epiphany. So central was the tree to the lives of the painters that the canon is called the Smoke Tree School.

Terry Masters comes by his Smoke Tree School credentials via 50 years of walking the washes and studying early painters. An award-winning plein air painter, Masters is a California Art Club signature artist. He frequently leads  Desert Art Center and California Art Club paint-outs in Araby Wash. He also paints the trees at Smoke Tree Ranch, and by the roadside wherever he finds one.

The owner of the Desert Painter Studio Gallery on Palm Canyon Drive, he tells his students that smoke trees are the hardest tree to paint. “They don’t have hard edges. They have nebulous shapes. One color shifts into the next color.”

In comparison to Terry’s long tenure in the desert, Millicent Harvey is a more recent arrival from Boston. An award-winning commercial and fine art photographer known for her landscape architecture work, she embraced the tree the first time she drove down Highway 111 and glimpsed the silvery heads in Araby Wash. She is a study in constancy. After traveling on assignments to photograph glamorous estates in Sonoma and New Haven, she always comes back to her wash.

Returning every week, she’s seen the constant changes in light and bloom; the earth cracked one year, then engorged with rain the next. She photographed the trees at first light, last light and all seasons. She moved in so close that she entered the trees’ circulatory systems and very hearts, in a way few had ever done.  She returned most often in the last year, as she was mourning the death of her father.

“There’s so much going on in different light, in different seasons that I don’t ever get tired of them,” she said. “Getting the color right is a challenge. The color is subtle and the hues are varied from the bottom to the top of each tree–gray blue, hints of green, ochre, sienna and gray.” 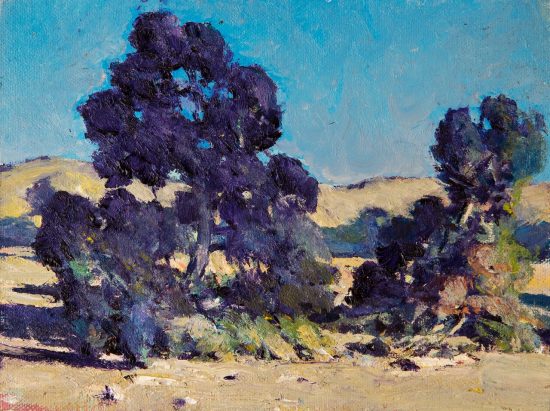 Prior to the February flood, Terry and Millicent took to the washes together as they made new photographs and paintings for the April exhibit. They were walking in Cathedral Canyon Wash early one morning when they both felt a light rain on their arms–though there were no clouds above. Covering her camera, Millicent searched the sky and trees for any hint of the source. When nothing was apparent, she took out her phone and captured the fine rain backlit by the morning sun.

A friend of Terry’s later explained that a bug named the glassy-winged sharpshooter sucks the moisture from the xylem (woody tissue) of the tree, then extracts nutrients and excretes the water in a fine mist. When hundreds of the bugs converge, you get rain.

That’s the scientific explanation. Here’s another: For their steadfast devotion to the smoke tree, Terry Masters and Millicent Harvey had been duly baptized.

A Celebration of the Smoke Tree: Photographs by Millicent Harvey and Paintings by Terry Masters is on display at The Desert Painter Studio Gallery April 1-30, 2019. The opening reception is April 7, 2019 5-8 pm. Come try a new cocktail–the Sharpshooter (named for the bug that makes smoke tree rain)–created just for the event. 370 N. Palm Canyon Dr. www.desertpainter.com  www.millicentharvey.com/ 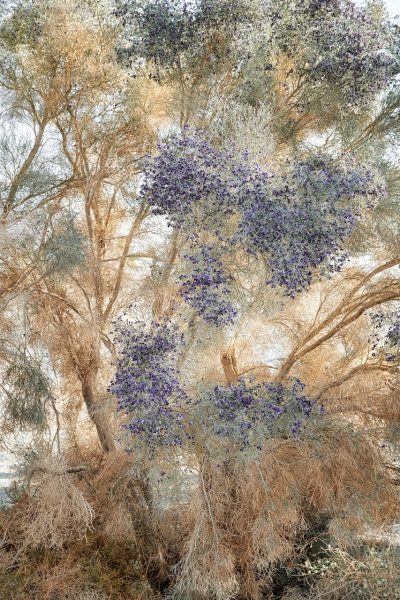