March 31, 2019–Art auctions seem to be geared toward sophisticates, people who drive Aston Martins and have helipads in the backyard. But these events also open up worlds of information to the rest of us. The Bonhams California and Western Paintings and Sculpture auction is the closest thing we have to a graduate course in early California art; and the accompanying textbook (the catalogue) is ravishing. 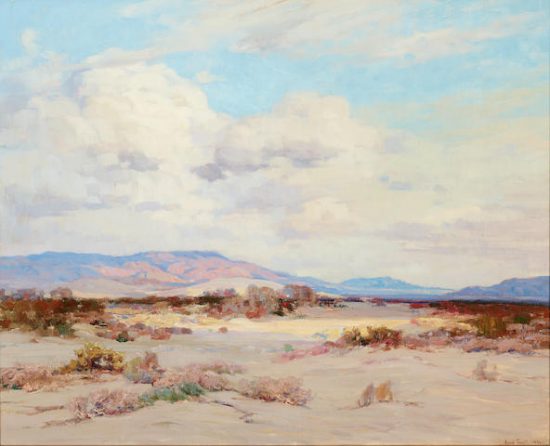 John Frost, Desert Clouds, painted in 1930 near Palm Springs. All images are courtesy of Bonhams. All paintings shown appear in the April, 2019, auction.

You’ll have a chance to go for the PhD when the show opens in LA and San Francisco on April 16, 2019. The Los Angeles preview–starting April 12th–is a great chance to see Paul Grimm, Maynard Dixon, Gordon Coutts and others all in one room, with experts on hand and no pressure to bid.

Bonhams’ specialists are always out in the field collecting and preserving the stories of the artists and their paintings. What they learn makes its way into the lavishly produced catalogue, full of insights into history and style. Did you know a white horse often serves to anchor a Western painting?

Though I’m as intimidated by the Goldfinger vibe as anyone, I plucked up my courage recently and talked to Bonhams Fine Art Director Scot Levitt about his 35 years evaluating historic California art, as well as the upcoming auction. Sample his insights in this edited Q&A. 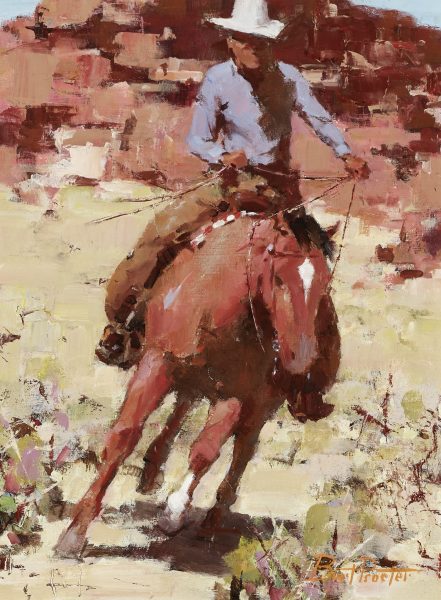 AJ: Have you spent time in Palm Springs and the Coachella Valley?

SL: When my kids were little–and still–we go down any chance we get, sometimes in the dead of summer, and winter is great too. We mostly like to stay in La Quinta but we also go to Rancho Las Palmas. I’ve got clients scattered all over the place, and I play golf with some of them.

The main area I focus on is California Impressionists and historical painters. So  I travel a lot in California. We recently did a big Western sale for a man from Kerrville, Texas so that took me to Texas for awhile…Scottsdale, Dallas…and we have a San Francisco office so I spend time there. 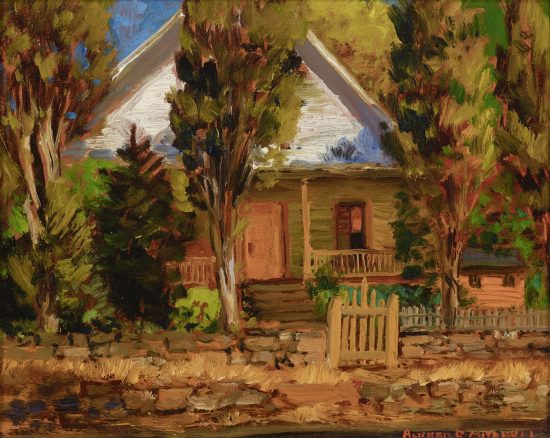 Do you know collectors who focus on desert paintings specifically?

I do have some clients who will buy specifically desert paintings, and not all of them necessarily live in the desert. Some of collectors will focus on a smattering of everything. Others will specialize in one thing–like one person who buys only paintings of Catalina. Others look for  Carmel, the Monterey area or Yosemite or certain Sierra scenes.

What is the current level of interest in California paintings? It was cool for a while.

It still is cool to a degree. California Impressionism had a big upswing around 1985 and 1986. A couple of coffee table books came out on the subject of plein air paintings. The two-volume set by Ruth Westphal was called The North and  The Southland. Those two books were the first time the general public really had a source that very simply spelled out a number of the artists and what they did.

Soon after the books were released some painters that were bringing $5,000 a painting were suddenly bringing $10,000. That market really ratcheted up considerably and kept going until the end of the ’80s and then there was a bit of a dip because of the stock market when everything was struggling.

Then Joan Irvine Smith [ed: the philanthropist who grew up on her family’s Irvine Ranch] came along around 1992, and she bought up thousands of paintings and really put a huge surge in the market. That strength continued until about 2008. And then the recession hit and a lot of changes in the market were happening at the same time. 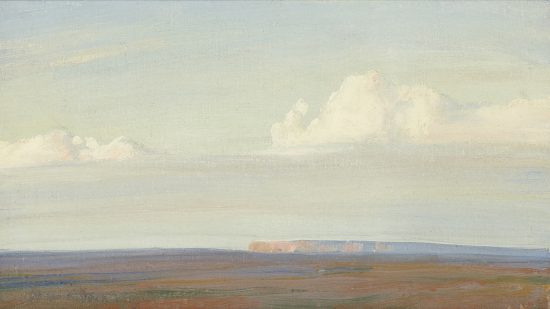 There was an increased interest in modernism and mid-century TV shows like Mad Men. Everything was suddenly focused toward mid-century style. That really softened this market. There are still plenty of people buying but it’s not on the kind of upward spiral it was before.

Here in Palm Springs we’re right in the middle of the modernist takeover. What would you say to a modernist fan to interest him or her in traditional California art?

You’re in the epicenter of it. If that’s what people like, more power to them. Things do go in and out of style. I have to assume that sooner or later with mid-century style all of the Architectural Digests and tastemakers and prognosticators are going to go: “We’re tired of this. Let’s try something else.” It all may come back around.

To me the older paintings are much more about craft and you have to be someone who appreciates craft–and not everyone does. To me something with a lot of detail that’s very tightly and carefully painted–it creates an impressionist effect. For me, those give me a little more to look at. The more representational paintings that are very well done just make me feel better when I’m  looking at them. 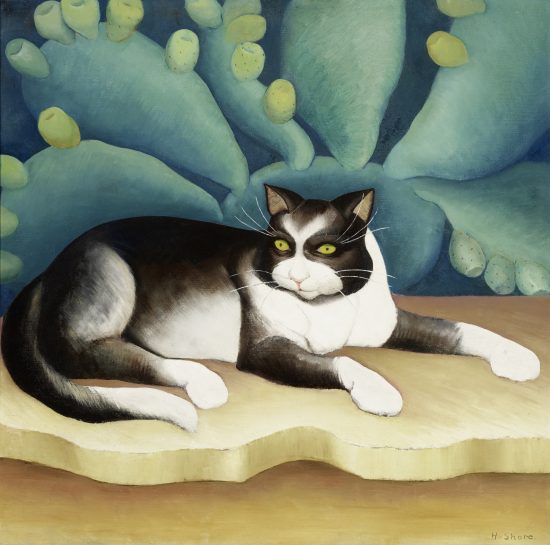 What desert artists are represented in your April sale?

All of the artists at one time or another showed up in the desert to paint. Franz Bischoff, William Wendt, Edgar Payne–all of them have desert paintings.

In this sale we have a Gordon Coutts. It’s called On Homeward Trail and it shows a prospector out in the desert.

And we have one of the more popular desert painters, Maynard Dixon. It’s titled Navajo Land. A small one. Edgar Payne did some desert scenes; we’ve got a couple of those. They are southwest, not necessarily Palm Springs.

You know an artist named F. Grayson Sayre? We’ve got a big one of his, 26 x 43 in. Of course, he specialized in paintings of the Palm Springs area. This particular one is of the Owens Valley. It’s a very nice painting from him. 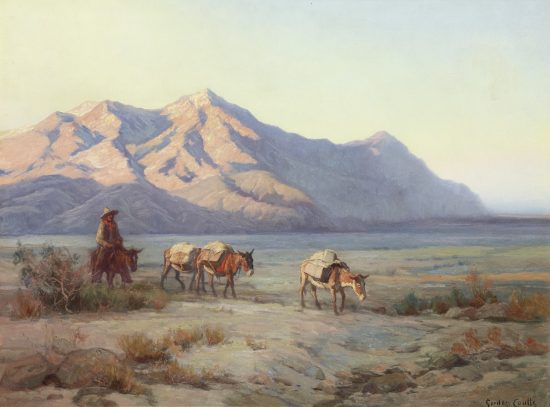 An artist who specialized in the desert quite extensively is Paul Grimm. We always have several by Paul Grimm. This time we have four desert scenes in one lot. They’re each 9 x 12 in. We have some redwoods and tree studies also by Grimm.

We have a nice Conrad Buff. It’s called Sycamores. It has a desert feel to it.

Is the John Frost (Desert Clouds, painted in 1930 near Palm Springs) the signature piece this time?

Do you come across Agnes Peltons?

There’s currently an Agnes Pelton show at the Phoenix Art Museum. Her desert paintings we see every so often and those bring very little at auction. You get one of her abstract pieces and not only are they super rare, but they bring a fortune today. But we almost never see them.

Who are the underrated artists that are selling reasonably these days compared to what they were at one time?

I’d have to say that John Frost tops that list. He’s an artist who is way down price wise from where he was at one time. The same with many of these desert artists. It’s a buyers’ market right now if you look at it in context of the last 30 years. 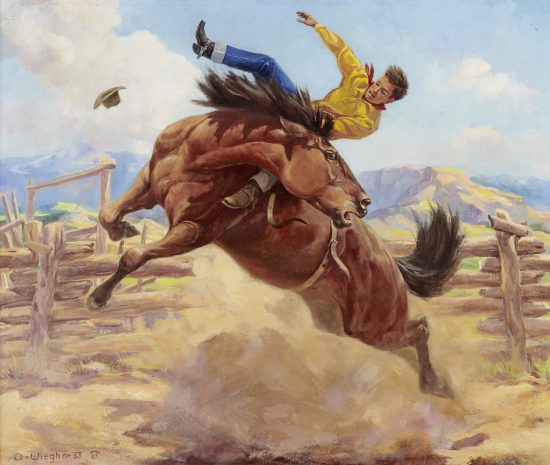 Some of the readers of this website have old desert paintings in a closet or under the bed. Should they contact you or are you only interested in the big names?

I always say I don’t even care who the painter is. I care what the painting looks like. It could be a virtually unknown painter who paints a drop dead gorgeous painting. That’s far more important to me than who painted it.

I encourage people to contact us and e-mail a photo with dimensions of the painting and I’ll get back to them with an idea of what it’s worth and if its something we can sell for them. [ Scot.Levitt@Bonhams.com]

People who don’t have e-mail can always drop something in the mail, or if it’s a big enough group I’m happy to have an excuse to go out to the desert and look.

Are auctions really a secret club open only to aristocrats?

They are open to everyone. It’s the ultimate leveling of the field. You’re sitting there and rather than having a price on the wall–at auction you have a roomful of people and the roomful of people are the ones deciding what something sells for.

Back in the day, auction houses mostly catered to dealers. These days dealers buy–in the case of California paintings–almost nothing. The reason is that they don’t like the websites showing what they paid for things. A buyer looks at their phone and says: “It looks like you just bought that at auction so why should I pay $ 75,000 for it.” So most of our buyers today are privates, as we call them.

I very much encourage people to take advantage of the fact that we have these auction previews ahead of time. So if we have a sale on a Tuesday, all the paintings are up and viewable Friday, Saturday, Sunday Monday and the day of the sale. People can just walk in, and we’re standing around and we’d like to talk to somebody.

We’re there to give you a free education–an absolutely free art historical education. All people have to do is make the effort to ask questions: Hey I don’t know anything about this. What should I know about it? Why is this worth $50,000 and this is worth $4,000? Who is this artist? Where do they come from? How do you price these? Why should I like this more than that?

We want to teach people about this world. Whether they buy something or don’t buy anything matters not to me. 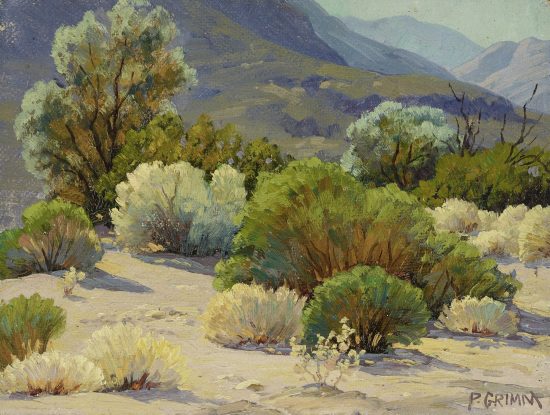 ← A Celebration of the Smoke Tree by Millicent Harvey and Terry Masters
A Happy Occupation: Agnes Pelton in Her Own Words →