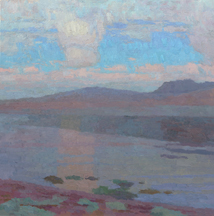 Most Manhattan gallery-goers don’t know the names Jimmy Swinnerton or John Hilton; they can’t tell a smoketree from a cholla. While desert art is expanding its geographic appeal, it hasn’t reached the east coast yet. That transcontinental link may finally be forged, though, with Eric Merrell’s show “No Man is an Island”, opening July 14th at the Forbes Gallery in the lobby of Forbes Magazine headquarters in New York City. The exhibit is a collection of Merrell’s paintings made during an artist’s residency at Joshua Tree National Park in 2009.

Will east coast viewers take to the yuccas and boulders? Eric is as curious as anyone. “I’m not too sure what to expect,” he said in a phone interview from his home in Rosemead.

The exhibit was set in motion in 2004 when Merrell joined a group of young artists invited to live and paint at the Forbes family’s Old Battersea House in London. There Merrell met Christopher Forbes, vice chairman of Forbes, Inc. Five years later Merrell was looking for a place to show his desert work and Forbes invited him to come east.

If anyone can successfully translate the language of the California desert to New Yorkers, Merrell has a good shot at it. A native of Gilroy, California, and a graduate of the Art Center College of Design in Pasadena, he’s already tackled all the California Classic themes—Yosemite, Big Sur, historic adobes. Recently he’s zeroed in on the arid lands as a place deserving his special attention.

When Merrell was awarded the Joshua Tree Highlands House Residency last year, it came with the dubious honor of a eight-week trip to Joshua Tree in July and August. His girlfriend at the time (now his wife), photographer Ramona Rosales, waved him off with a “Well…have fun.”

Merrell suffered suitably for an artist on an initiatory journey. He stuffed frozen water bottles in his pockets to stave off heat exhaustion. The devil winds dragged his palette face-down across the sand “leaving streaks of yellow and orange on the desert floor,” as he reported on his blog.

But you know how these desert stories go. Either because of or despite the hardships, he ended up liking the desert. Rosales likes it too—so much so that the two are thinking about buying a desert home. Until then, they’ve planted aloes and agaves in their suburban LA backyard, creating their own little desert.

Merrell hasn’t stopped at Joshua Tree but has also explored places like Desert Hot Springs and Pioneertown, as well as a favorite camp of the early desert artists—the North Shore of the Salton Sea. His artist friend Andrew Dickson has grandparents who live at North Shore, so the two go out to paint. “I like the Salton Sea area, the light is really interesting,” says Eric. “It took me awhile to figure out how to paint it.” To compensate for the lack of contrast, he looks for the most subtle pinks and blues and pushes the colors.

“He has…enriched his color palette to establish himself as a modernist, much in the tradition of the Fauves,” says Jean Stern, executive director of the Irvine Museum. “Eric has, in fact, ‘liberated color from its role in nature’ and made it his own distinct stylistic element.”

Edenhurst gallery co-owner Thom Gianetto is also struck by Eric’s use of color. “I see color sensibilities in his work that are reminiscent of the American and French Impressionists, especially of Theodore Earl Butler who was very close to Claude Monet. I also intercept Birger Sandzen-like qualities, especially in Eric’s exploration of form and color. Eric Merrell has a very bright future ahead of him.”

It figures Merrell would be drawn unknowingly to such a historically significant location as the Salton Sea. He has a penchant for California art history, having worked as an archivist for the California Art Club, founded in 1909. He’s written articles on the Club’s history, and is a contributor to the CAC Centennial Book due out in early 2011.

Whether or not Fifth Avenue is won over by the desert, you can be sure you’ll be seeing Eric back out in the dry places. Next he wants to check out Box Canyon (Jimmy Swinnerton country) and the pinyon-and-boulder lands up on Highway 74 (Agnes Pelton territory).

If you can’t make it to New York, you can see Eric Merrell’s work at the new Edenhurst Gallery in Laguna Beach, opening Friday, July 23rd. http://www.edenhurstgallery.com/

For more on Eric Merrell see: 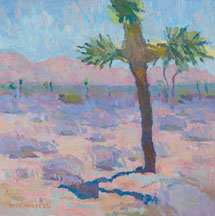 3 comments for “Eric Merrell: Bringing the California Desert to NYC”