If Cathedral City was an unlikely place to nurture groundbreaking artists like Agnes Pelton, Virginia City, Nevada, is even more unlikely. Twenty-six miles south of Reno, the frontier boomtown rests on a mountainside at 6,200 feet. It’s riddled with abandoned mineshafts and surrounded by the Great Basin Desert. Writer Anthony Shafton describes it as “tourist destination, celebrity pit stop, artist retreat and haven for deviants of all varieties.” 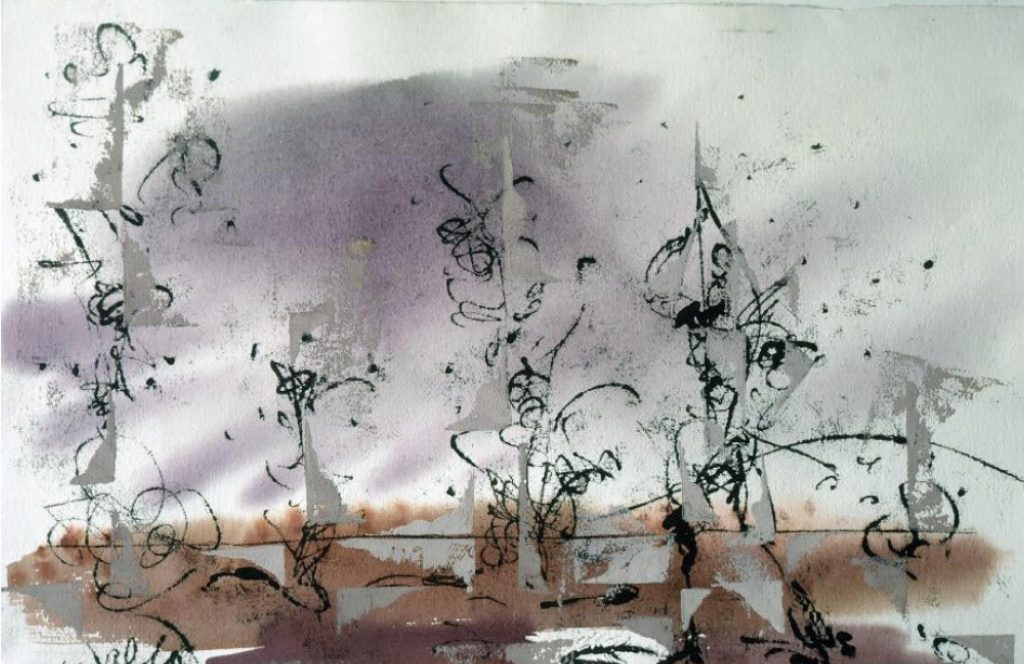 The Comstock region yielded millions in gold and silver in the mid-1800s when young Mark Twain (then Samuel Clemens) arrived to write for the Territorial Enterprise. Another sort of boom followed when the Alameda-born painter Zoray Andrus arrived in Virginia City in 1935. Converting an old brewery into an artists’ hang-out, she entertained guests such as Salvador Dali and became one of Nevada’s first abstract artists.

The Reno writer Shafton introduced this scene in his book on artist Robert Caples, and now there’s a second book in the series (at least, I hope it will be a series.) While researching Caples, Shafton heard rumors of a stash of old audio tapes by Richard Guy Walton, a post-war modernist who studied with Jimmy Swinnerton. 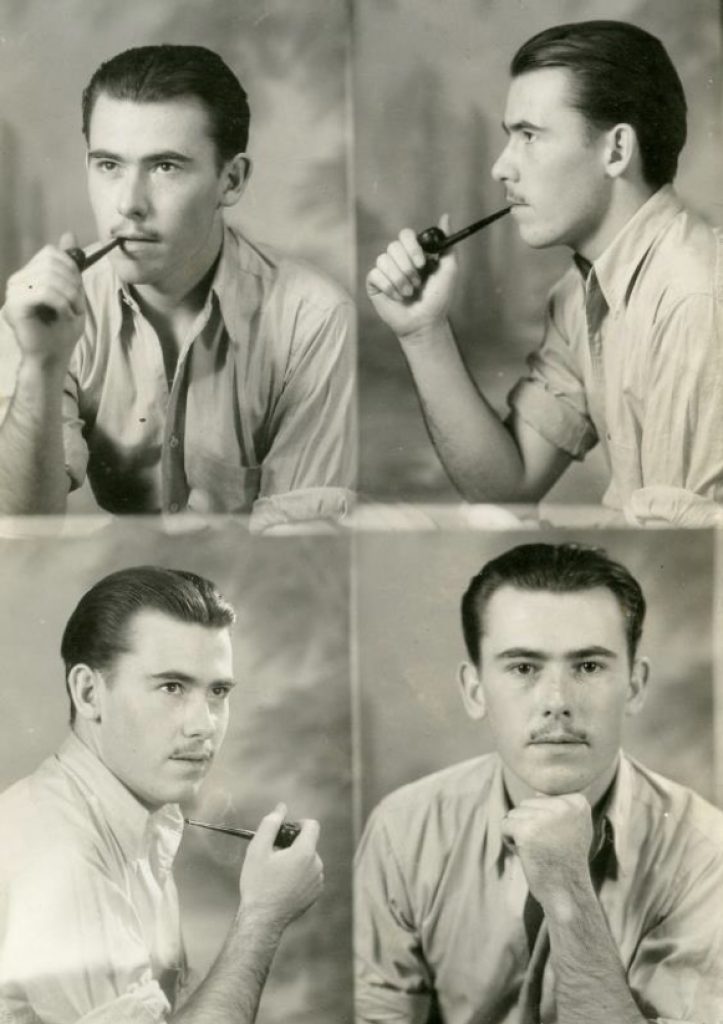 He eventually tracked down Walton’s widow, Vivian, who directed him to the Nevada Historical Society. “What I found there were three double-sided carrying cases holding 180 cassettes, 90 or 60 minutes each, or roughly 250 hours total.…” he writes in his new book, A Nevada Life: Richard Guy Walton.

Shafton has parlayed the discovery of the cassettes into a dense, detailed profile of a complicated artist–“an overconfident incessant talker” more famous for his flops than his hits.

Walton (1914-2005) was born in San Francisco and raised in Stockton. He first traveled to Nevada’s Great Basin Desert as a boy and would later write of the experience: “I entered Reno, got off the train and was never quite the same.” 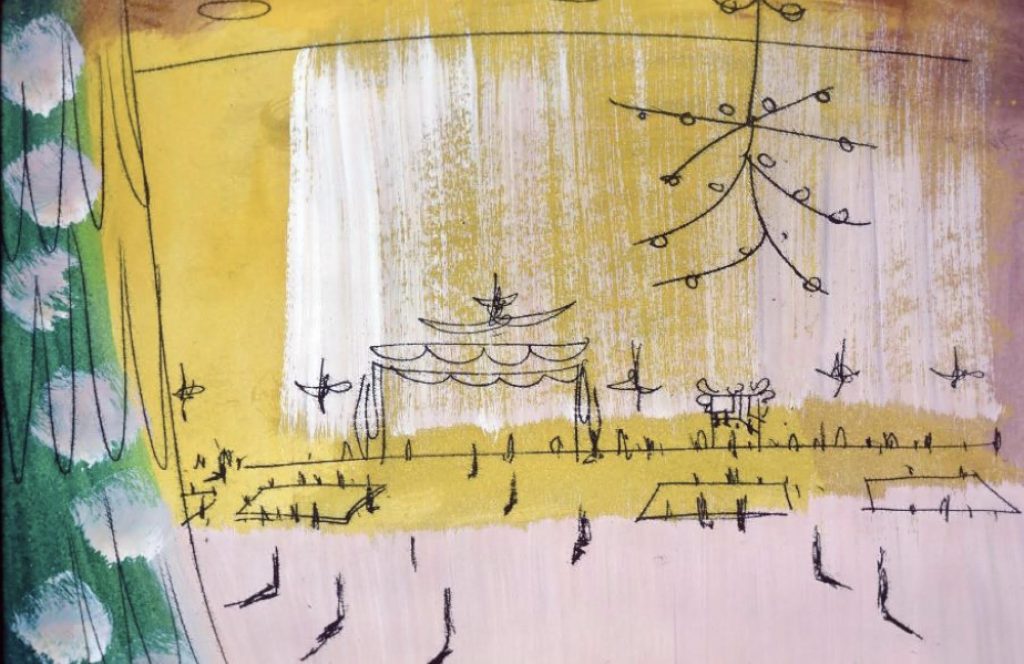 As a young man, he met Jimmy Swinnerton, smoke tree painter and former Palm Desert resident. Walton was then living in Las Vegas with his mother, Myrtle. While shopping one day, Myrtle recognized the famous artist and corralled him to talk about her own artist son.

“Swinnerton looked at Walton’s drawings, then took him for a hike to introduce him to the desert as a subject for art,” Shafton writes. “More consequentially, he put in a good word for him at Chouinard Art Institute in Los Angeles.”

Walton went on to Chouinard, where he acquired a formal art education. He then returned to Nevada and applied for a position with the Federal Art Project. The move led to a friendship with the project’s state’s director, painter Robert Caples, and also yielded a number of mural commissions: the Buhl, Idaho Post Office and the Reno federal building, among others.

When Walton arrived in Virginia City, Zoray Andrus had already primed the ground for artists. Lucius Beebe–a railroad writer, gourmand and dandy famous in Manhattan society circles—came to town in 1950 to relaunch the Territorial Enterprise newspaper. Walton showed up during Beebe’s reign and got to know the trend-setter, as the scene continued to accelerate with the arrival of more artists and writers. 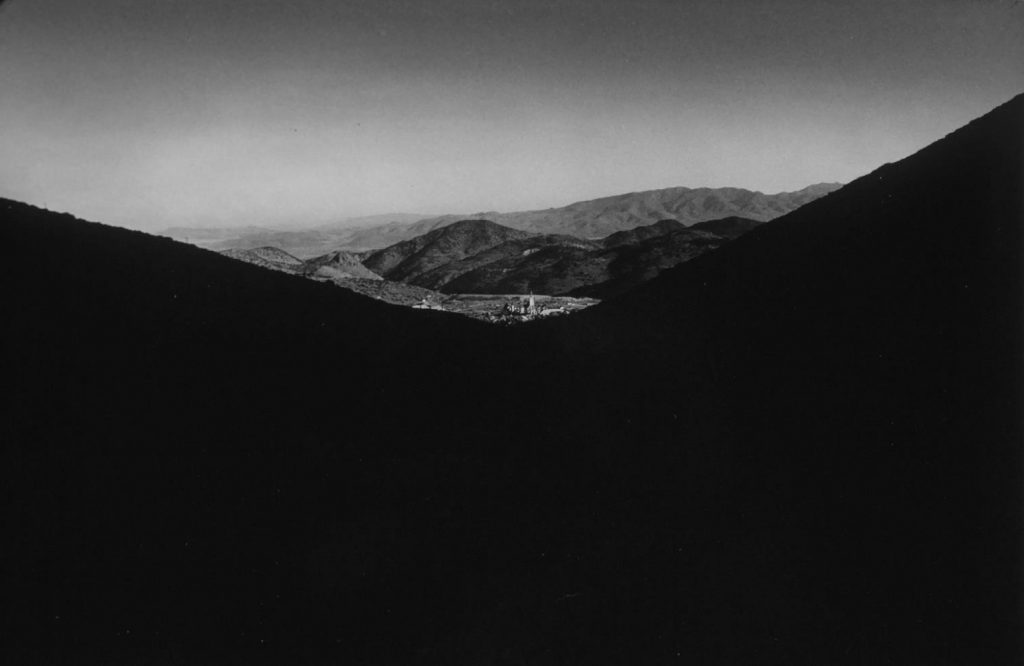 Virginia City, II. Richard Guy Walton photograph. “What could I do in an asphalt world? I couldn’t leave Nevada and its space,” Walton once wrote.

The newcomers brought with them a bohemian ethic that stood in sharp contrast to the Victorian splendor of Virginia City architecture. Defying bourgeois society and dedicating themselves to creativity, the free spirits found their footing here at about the same time artists were exploring a similar ethic in the Cathedral City Cove.

These were the years when realism was bending to abstraction, and Walton actively went in pursuit of the new. He traveled to New York in 1946, visiting Betty Parsons (den mother of abstract expressionism) in her gallery. He left three paintings at the new gallery and attended the grand-opening, where he lectured the now-famous abstract artist Barnett Newman on symbolism.

“Had things gone differently, he could have ended up in that circle,” Shafton said in a phone interview. “He described himself as ‘a man of near misses.’”

Walton did have some success in the art world, as evidenced by his three retrospectives at the Nevada Museum of Art. At one event he was billed as “The preeminent Grand Old Man of abstract art in Nevada.”

Yet, mostly Walton knew rejection. His novels and poems (he wrote as well as painted) were repeatedly turned down by publishers. Desperate for income, he commuted to Hollywood to hawk paintings at society affairs. Over the years, he worked gigs as a venereal disease researcher for the state health department, as an extra in the Godmonster of Indian Flats horror movie and even freelanced as a sheepherder. 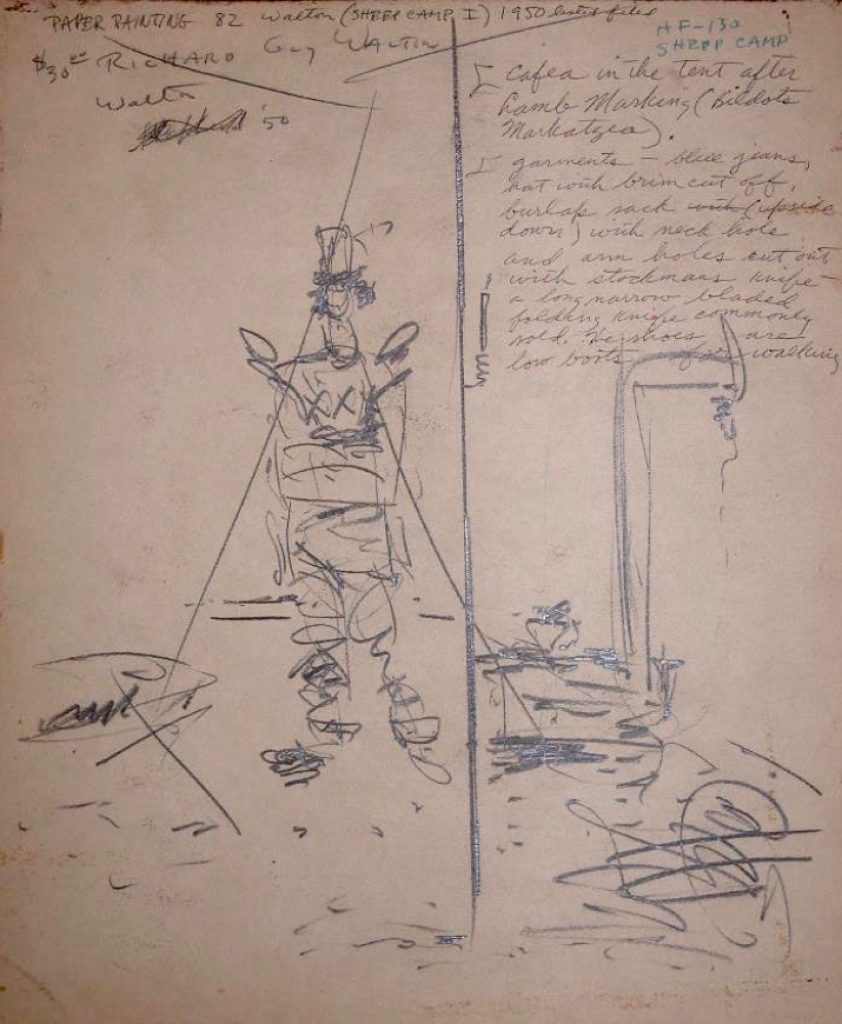 While doing work as a movie extra, he took a part in the bar scene in The Misfits, starring Clark Gable, Montgomery Clift and Marilyn Monroe. (The scene was filmed in Dayton, Nevada.) His sympathetic observations of Marilyn are pertinent to the current statue debate in Palm Springs: “She was so alone under that parasol that they would hold for her, and on call like a trained animal.”

Despite his flops, Walton’s confidence never faltered. He always had devoted women by his side to affirm his talent. His wife, Vivian, commuted over a snowy grade to work as a change girl at a Reno casino so that Walton could stay home and pursue art. 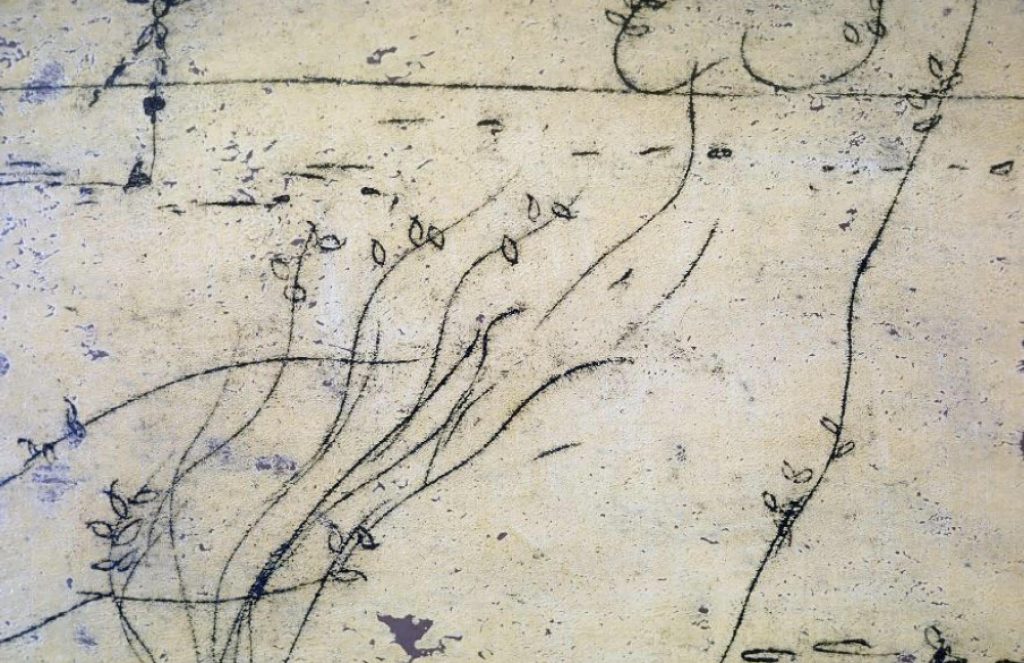 Shafton’s book alternates his own observations with Walton’s unpublished writings and taped recollections for a layered, mosaic effect. Readers are lucky to finally have a chance to read here parts of Walton’s never-seen novels. “Few people got to read them, apart from the editors who returned them,” Shafton writes.

Now that the Agnes Pelton frenzy is winding down, perhaps the dealers and scholars will turn toward Nevada. Then one day Walton’s life of near-misses could yield a big comeback for the Comstock Bohemians. 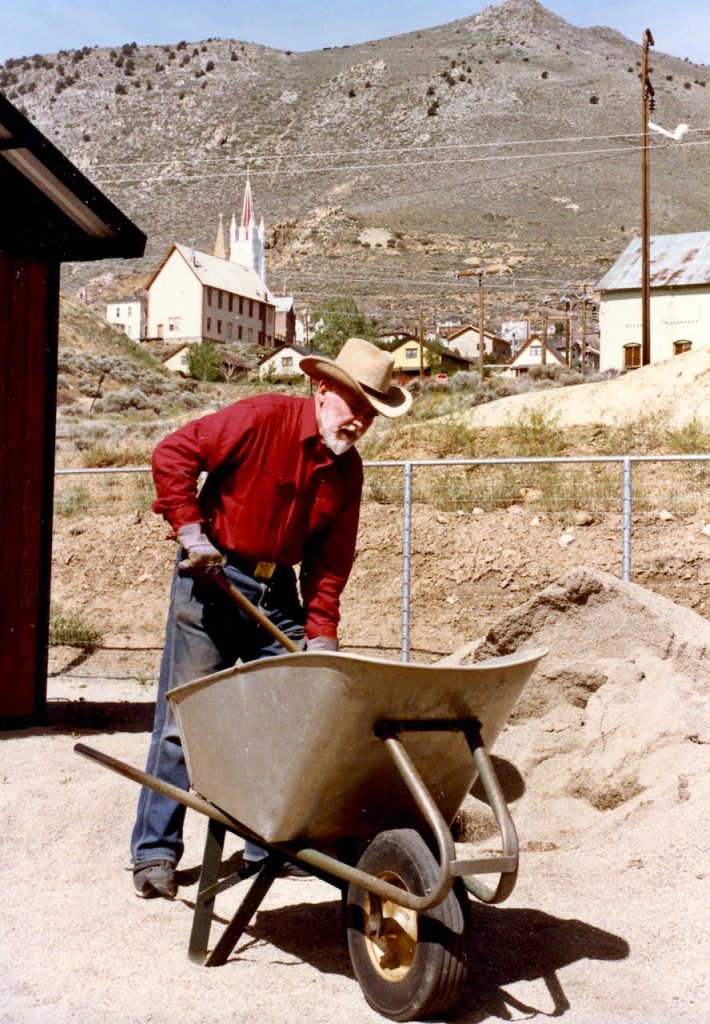 Richard Guy Walton as an older man. St. Mary’s in the Mountains church in the background. Late in life Walton made paintings and sketches that pointed to his longstanding interest in “dimensional awareness” or non-linear worldviews.  He—like other abstractionists—was experimenting with realism as a jumping-off place to plumb the essence of things.

← Headstone for a Hero: The Quest to Mark Susie Keef Smith’s Grave
C.E. “Smitty” Smith and the Glory Days of the Palm Springs Desert Museum →

4 comments for “Outpost of Abstraction: Richard Guy Walton on the Comstock”