Sixteen-year-old Robert Cole Caples left New York City for the West in 1924, landing in the Great Basin desert of Nevada. When the boy got his first look at Pyramid Lake, his future as Nevada’s leading artist of the 20th Century was cinched. “Such unexpected beauty really hurt,” he said. “It was like being struck with the sky.” 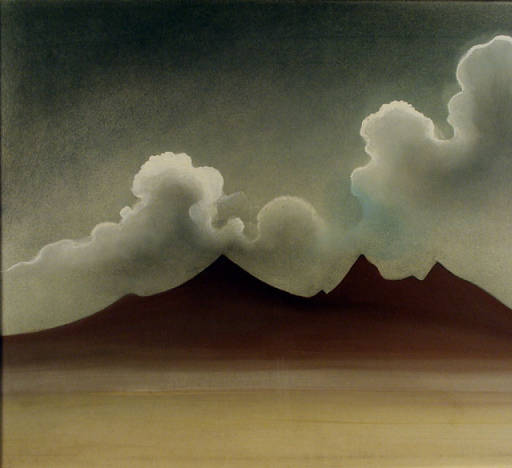 Like Agnes Pelton, Caples sought the essence of landscape, or what he called “the great dance going on behind the mask of things.” Completing his initiation as a desert painter, he eventually declared his devotion to one beloved place. Pyramid Lake became a focal point of his life, as Mt. San Jacinto was for Pelton.

Yet unlike our Agnes, Robert Caples (1908-1979) is not enjoying a comeback. “He is known in northern Nevada among people who have a sense of the past, but he really doesn’t have any stature nationally,” says Anthony Shafton, a Reno writer and independent scholar who was a friend of the artist. 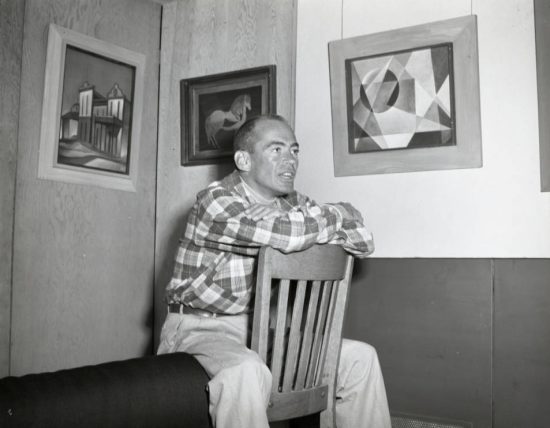 That may change thanks to Shafton’s new book. The Nevada They Knew pairs the life story of Caples with that of his friend Walter Van Tilburg Clark, a Western writer best known for The Ox-Bow Incident. Both men were shaped by the Great Basin. “What mattered most at all times everywhere?” Caples once asked. “The desert.”

Shafton’s book opens an enthralling world of Nevada painters to fans of California’s Smoketree School. If you react like I did, you’ll want to immediately drive to Pyramid Lake, drop to your knees and toss up handfuls of “lovely Nevada dust”, as Robert Caples once did.

The young Robert Caples went on to study at the Art Students League in New York City and to work with the Federal Art Project during the Depression, later gravitating to Virginia City, Nevada. An old mining town with a rollicking history, it drew wealthy eccentrics and artists. Gourmand and journalist “Lucious” Lucius Beebe settled here with his partner Charles Clegg in 1950, transporting Café Society from Manhattan to the outback. 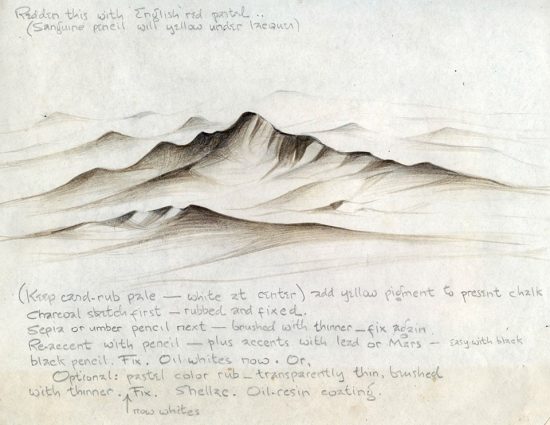 Here Caples met vivid characters such as Zoray Andrus–one of the first Nevada artists to pursue abstraction–and Richard Guy Walton, a post-war modernist who was influenced by our own California desert star Jimmy Swinnerton. This enclave of modernist painters–the so-called Comstock Bohemians–is a little-known scene that parallels the Taos Art Colony, as well as the Cathedral City art colony of  the 1950s.

Caples spent time in Reno, a freewheeling town enlivened by the gambling and divorce industries. (Caples’ father had come here for a divorce, a move that first brought the young artist West.) He explored old mining camps and befriended Paiute Indians; they would become a favorite subject of his work. More than any one subject, the region’s light became Caples’ polestar. “I believe in light,” he said. “I am in love with light. Light is the center of all life and all meaningful experience.” 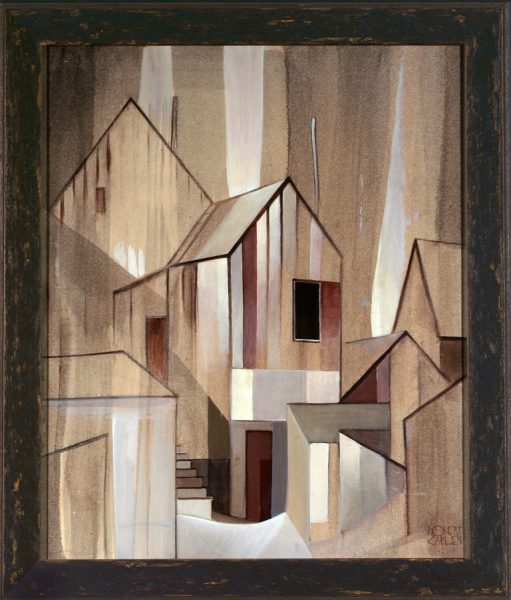 The sentiment again puts him in sympatico with Cathedral City’s Agnes Pelton, as Pelton famously said: “All my abstractions have to do with light, for light is really all life, you know.”

Along with his esteemed charcoal sketches of Nevada’s Indian people, made for the Federal Art Project, Caples was known for his landscapes of Pyramid Lake and the nearby mountains. “He created elegant, haunting landscapes that portrayed no place in particular but were precise distillations of the desert, mountains and dramatic atmospheric effects experienced in the desert,” wrote Marcia Cohn Growdon in the Nevada Historical Quarterly.

Growdon likens his style to that of Edward Hopper, Stuart Davis and John Marin, with touches of cubism in the mix: “Chunks of shadow, pieces of mountain, clouds and stuff,” as Caples described his recipe. 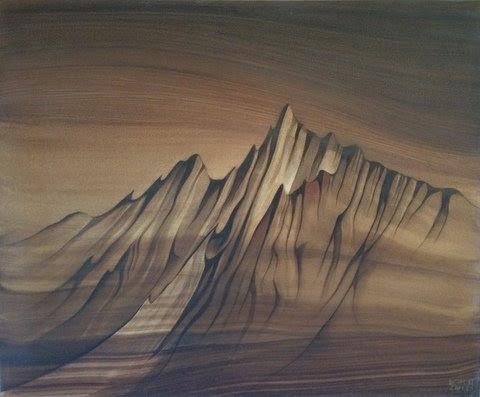 Along with Pyramid Lake, Caples was fascinated by Death Valley and made solo trips there to satisfy what he called a “deep hunger for pathless aridity”. He once made a legendary walk across Death Valley in tennis shoes in the summer heat, sketching along the way with ink he improvised from the iodine in his first aid kit.  Of the 100 drawings Caples made on one epic Death Valley walk, author Shafton has found only one existing example, which appears in the book. (Because of the focus on the lush text, the illustrations are small. We await a companion book featuring Caples’ praiseworthy paintings in larger format.)

In his later years, Caples made paintings of stars and galaxies, again echoing Agnes Pelton’s dive into celestial themes. He showed up as an artist-character in Walter Van Tilburg Clarks’s The City of Trembling Leaves, a coming-of-age classic set in Reno. While he eventually returned to the east coast, he remained lovesick for the desert his whole life: “I so love Nevada that 10,000 Connecticuts couldn’t budge its well-remembered mountains from my spirit.”

The author Anthony Shafton was similarly smitten. The author of five books on diverse subjects, he has degrees from Harvard and Stanford, where he studied with Wallace Stegner in the creative writing program. When he traveled from his home in Gary, Indiana to Reno to do research for his book, he met and fell in love with a woman who has ties to both the Caples and Clark families. He fell just as hard for the basin and range country, and moved to Reno in 2012. He frequently wanders the shores of Pyramid Lake, which has “a beautiful, ancient feeling about it.” 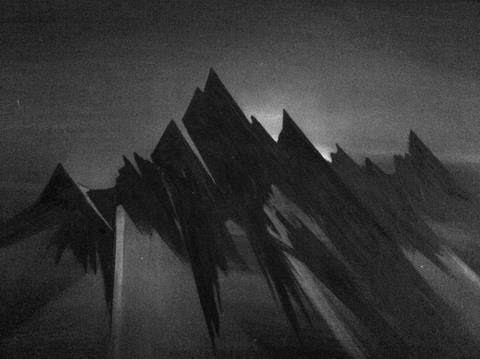 He’s now considering writing a book about another painter from Caples’ circle, Richard Guy Walton, and is listening to a cache of 180 cassette tape recordings Walton made about his life as a Nevada artist, including his experiences working in a sheep camp.

As an introduction to Shafton’s sprawling tale–The Nevada They Knew–an excerpt follows. In this chapter, Robert Caples and his wife Shirley establish a short-lived artists colony called Indian Springs on a former divorce ranch near Las Vegas.

Indian Springs, an excerpt from The Nevada They Knew by Anthony Shafton

“Robert Cole Caples, prominent Nevada artist, and his family have moved to Indian Springs, Nevada, where they are occupying a picturesque ranch home.” Borghi of the Gazette was still keeping track of Robert from Reno. She said Robert chose the locale for its desert to paint, but chances are Shirley dreamed up the idea of an artist colony and picked the place. The locals, at any rate, perceived the artist colony as Shirley’s. Indian Springs wasn’t an old mining town like Robert’s beloved Austin, which Shirley despised to judge from City. The onetime Southern Paiute corn and squash field, then freight wagon stop, then rail watering stop, then truck farm for Las Vegas, then vacation spot with ponds created by damming the spring, then guest ranch known around the West, was, by the time Shirley bought the McFarland place in 1940, a divorce ranch. It and the nearby ranches and the few businesses at Indian Springs used the Las Vegas post office at forty empty miles’ distance. 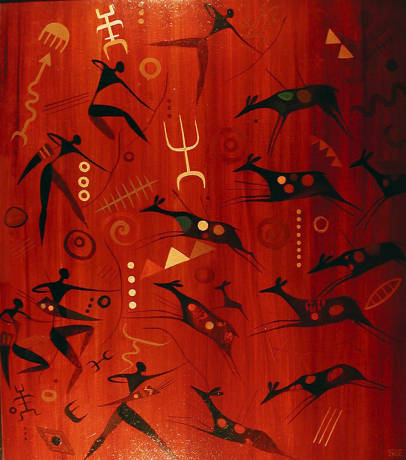 In 1974, a student in geography, Phyllis Skelton, found information about the Indian Springs artist colony for her master’s thesis in a those-were-the-days article in the Nevada Test Site’s news biweekly – the site is a neighbor, by Nevada standards. Further information came from locals who were still around.

[Shirley] had tremendous wealth and might dress for an occasion in a suit styled by Mainbocher, wearing her famous emerald, but around Indian Springs she wore levis. . . . [T]o create an atmosphere where [her husband, Robert Caples] could work well and be content Shirley invited many artists and intellectuals to stay there. . . . Walter Van Tilburg Clark, author of the Ox Bow Incident, stayed there for a year while he wrote The City of Trembling Leaves. . . . Mrs. Caples spent thousands of dollars to create an exciting garden spot in the desert. . . . Two native Mexicans were imported to build authentic desert homes from adobe, and a special home was built for Mr. Vanderhorst, a herpetologist. . . . Shirley Caples thought the original ranch house was very attractive and quaint and wanted to live there, so she build a modern home for Alice McFarland, who was still living there under the life tenancy agreement. . . . [T]he Caples had parties for almost any occasion, and all of the activity this family generated added a new excitement to life in Indian Springs. 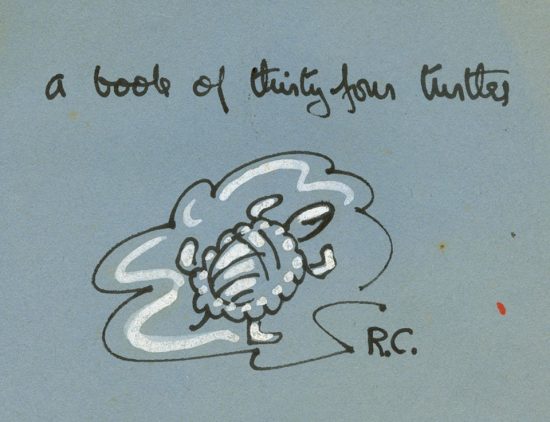 The cover of a book Caples made at Indian Springs. Courtesy of the Nevada Museum of Art, Center for Art + Environment, Bequest of Rosemary Riley Caples.

Borghi gave a glowing description of the place in late 1941. She noted the “community vegetable garden” and “community dining room” – but this was no commune. The resident artists, she said, paid a staff “to carry on the work” and “a musician and astronomer” to teach their children. Actually, as Bob Clark wrote of this time, “the colony” – that is, Shirley – paid for everything, “housing, evening dinners at a main house, and even living expenses in exchange for a percentage of the profit that would theoretically ensue” from sales of the artists’ works. Only Walter, who viscerally resisted being patronized in any manner, “insist[ed] on paying his own expenses,” as he would later insist at Mabel Dodge Luhan’s Taos colony. I doubt any of the others ever reimbursed Shirley. 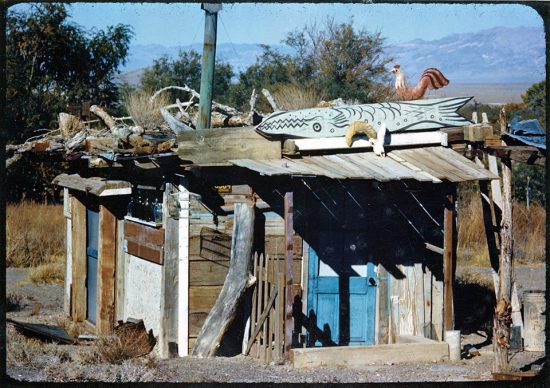 Some of the resi­dents artistically em­bel­lished the exte­ri­ors of their cot­tages. Robert added to the mélange by building his own stu­dio, The Lizard, a ram­shackle hut, its roof adorned by a rooster, a moun­tain sheep skull, and a large toothy fish paint­ed on a board. The roost­er was a weather vane featured in the 1941 Borghi Gazette item. The accompanying photo showed ceramics made by Shirley, the rooster and several bowls. A dilettante potter, she’d had a studio built for herself, a plainer, more solid shack, the Turtle, after the discovery of clay deposits on the ranch.

Anthony Shafton’s The Nevada They Knew is available on Amazon. The book’s website:

The University of Nevada, Reno, maintains an extensive online index to the book, a valuable resource for anyone interested in Nevada artists and writers: 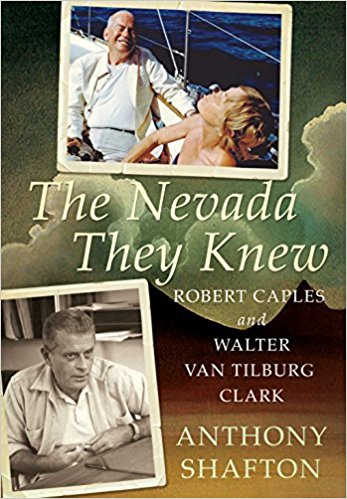 ← The Golden Age of Warner Graves: Back to the Canyons
Hazel’s Garden: Outsider Art Discovered in Wonder Valley →