The Desert X team may want to look to Indio for an example of site-specific art firmly rooted in the desert soil. You start with a local ingredient, in this case a 95-year-old water tower that stood at the corner of Ave 48 and Jackson St. (now Coachella) on the old M.H. Whittier Ranch. The tower was moved to the Coachella Valley Historical Society grounds in 1993, as a memorial to a local date grower. The staff took up a fundraising drive to evict the pigeons and repair the scaffolding. 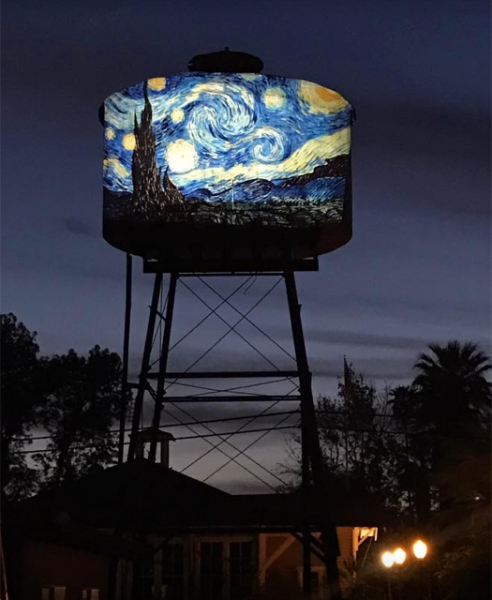 A simulated view of the tower. Van Gogh will be replaced by local artists.

Then you add indigenous art. Because water towers were often the highest point in small towns, they were traditionally painted with advertising slogans. In Indio, artists first thought of painting murals on the renovated tank.  The Indio Public Arts and Historic Preservation Commission nixed the idea to maintain the historic integrity of the structure. Then along came E.J. Neumeyer, an Indio native who serves on the commission.  In his work as a steel fabricator, Neumeyer had helped with the art installations at the Coachella music festival. He proposed the idea (partly inspired by the Sydney Opera House) of projecting 360-degree images by local artists onto the water tank. The projectors are now on order and the Arts Commission is inviting submissions from local artists. The ongoing installation will be not just site-specific but site-perfect, as it will sit beside the 1909 schoolhouse and the 1926 Smiley-Tyler adobe.

In the fall of 2017, look to the Indio water tower to be a hub where hordes of International selfie-takers meet descendants of the east Valley date farmers.

For more on the tower: http://www.cvhm.org/water-tower.html

Banning has always been a desirable base for a certain sort of off-the-beaten-track artist. It boasts cooler temps than Palm Springs, as well as vintage Craftsman homes, a refreshing lack of glam, and bold views of the twin peaks San Gorgonio and San Jacinto. Gloria “Toti” Bell is one artist who recognized the potential and opened a studio here devoted to her work in the Dia de los Muertos tradition. During a recent event at Toti’s Art Studio, Western artist Chuck McCracken showed up with a surprise gift: A portrait of Gloria in her gallery. 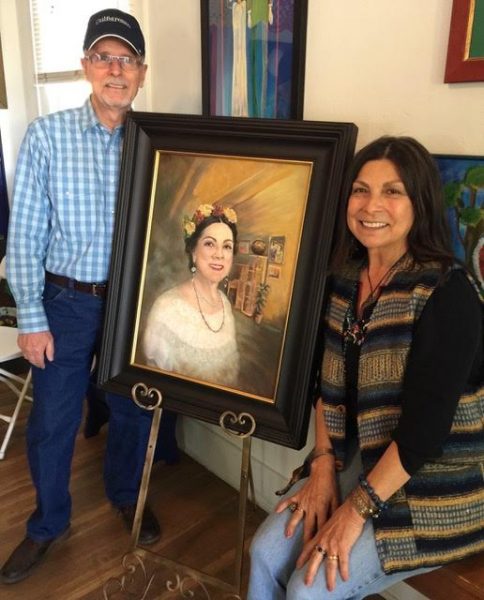 Chuck is from Beaumont, another lesser-known base for artists. The painting serves as an opportunity to introduce Chuck McCracken and Gloria “Toti” Bell, as well as the undiscovered art towns of the San Gorgonio Pass.

A concern for those of us who love desert art is: Where will the next generation of plein-air painters come from? A Manhattan Beach artist, Kathy Bauer, has an answer. She’s taken desert painting into South Bay Schools and says by the end of the next school year more than 20,000 students will have tried desert painting.

“The project was inspired when I saw Eric Merrell’s short movie about painting the desert at night,” Bauer says. “I wanted the kids to see that being an artist was not only a viable career option but was also fun, exciting and adventurous. My favorite comment from kids when learning about Eric was, ‘You mean he’s an artist that’s living today?’ They are so used to learning about artists from the past, they think that being an artist is an ancient career.” 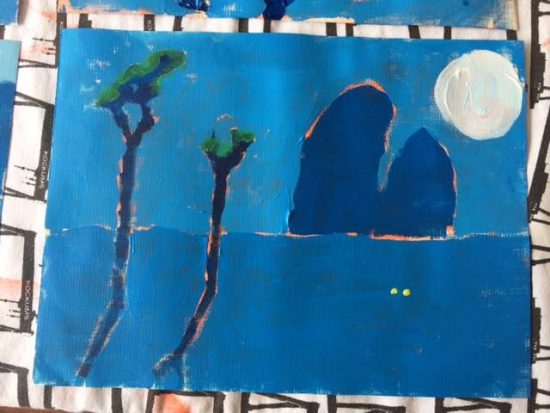 Note the yellow orbs in the student’s painting shown here. “Based on Eric’s experience of seeing two sets of yellow eyes staring at him while he was painting–and then adding the eyes in his painting–the students added yellow eyes to their paintings,” Bauer says.

Kathy Bauer is teaching desert painting via the Young at Art and Art at Your Fingertips programs.

The Cathedral City arts colony is fertile ground for researchers. New names keep popping up, as the story unfolds. One character associated with Agnes Pelton and the early Cathedral City pioneers is Samuel DeWalt Arner, currently honored with a small exhibit at the Cathedral City Civic Center Gallery. Arner was an explorer, archaeologist, landscape painter, poet and businessman who came to Cathedral City in 1931.  He studied with artist George Frederick Gleich (“Smoketree George” was previously profiled on this website) and opened a Museum of Antiquities and Art in Cathedral City. He staked a claim on a 160 acre homestead and had dreams (never fulfilled) of building an artists’ colony in the Cove, complete with diversions such as trap shooting, archery and horseback riding. 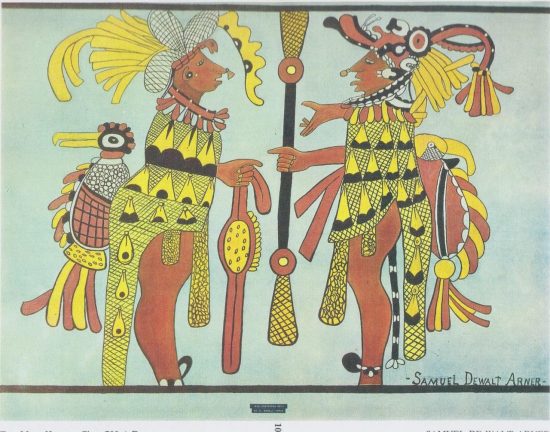 Despite his reputation as a Western painter, few of his paintings have surfaced. Recently, though, Cathedral City Historical Society members Janey Ash and Margie St. Anthony were visiting the home of Bob and Kay Hillery (Bob was the first elected mayor of the city) when they spotted a painting destined for the trash. The painting was a crude depiction of two town gossips. There were two votes for dumping it and one for saving it. Margie St. Anthony, creator of the popular Cathedral City arch replica, won by pointing out the maligned object was one of the only Sam Arner paintings known to exist. We are hoping more examples of Arner’s work will surface. In the meantime, you can see the almost-discarded painting and learn more about Samuel Arner at the Cathedral City Civic Center Art Gallery, open weekends starting in May, 2017.

Terry Hastings is curating an exhibition on the Past, Present and Future of the Salton Sea for UCR-Palm Desert. He’s looking for work in all media and is open to “grand ideas”. The exhibit is slated for October-December, 2017. For particulars, write to Terry@theHastingsGallery.com. Entries are due by July 1, 2017.

Douglas Dolde, a seasoned photographer of the American West and the deserts, has work up at the Rancho Mirage Public Library through Labor Day, 2017. This is one of my favorite hot weather stop-offs, so go enjoy the ongoing used book sale and take a look at Doug’s art.

San Diego is another hot weather escape for desert dwellers; if you go there be sure to visit Erin Hanson’s new gallery, (9705 Carroll Centre Road), relocated from Los Angeles. Hanson is an energetic landscape painter with an intimate rock-climbers’ knowledge of the desert. She’ll be living closer to Anza-Borrego so we’re hoping more desert work will result from the move. 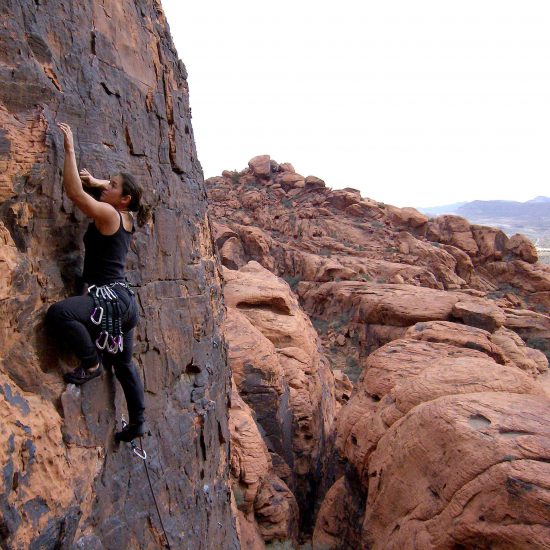 Made in the Mojave

Made In the Mojave at The MOAH (Lancaster Museum of Art and History) through July 30, 2017, is the launch exhibit for Kim Stringfellow’s ongoing Mojave Project. The exhibit introduces contemporary artists who clearly love the desert. Catherine Ruane’s intricate charcoal and graphite drawings explore the relationship between a Joshua Tree blossom and a tiny moth. The artist has previously made a deep study of Washingtonia filifera; she says the palms “define my personal experience of home.” Mine too. 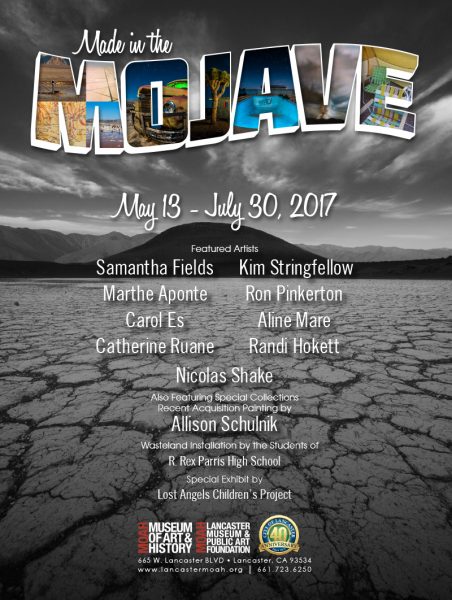 Paintings in Search of Homes

Jennifer Leonard wrote from England about her Carl Bray painting that traveled all the way over the Sea. Her father purchased the painting (a rare-for-Carl Indian portrait) 24 years ago from a small antique shop in New Hampshire. Jennifer is looking for a new owner who’d like to bring the painting full circle: Indian Wells to New Hampshire to England and back to the desert. You can reach her at jennifer.leonard@ntlworld.com 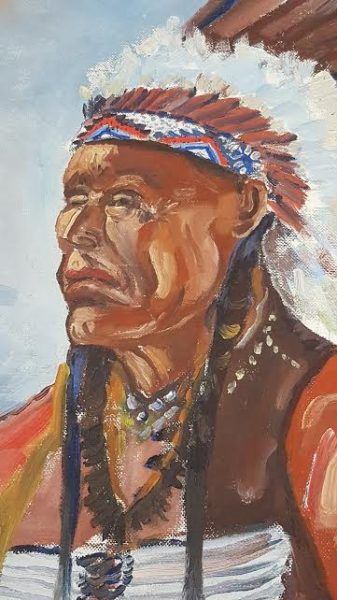 Toni Fritz of La Quinta wrote to say her family was church friends with the late Carl Bray and his wife Luella. They collected several Bray paintings and Toni is now ready to pass them on to a new generation of Bray fans. You can reach her at tllfritz@aol.com

John Kelsey wrote to tell about the art deals available on the Goodwill online auction site. Kelsey picked up a John Hilton painting of Church Rock, east of Kayenta, Arizona, for $743. It came from a gallery in Palm Springs and had a $1400 price on the back. Though he lives in New Orleans, John Kelsey’s home is like a Southwestern museum with “13 Navajo rugs, pottery, kachinas and over 200 framed paintings on my walls.” If you are interested in purchasing the Hilton painting, contact John at xo-xo-x@comcast.net 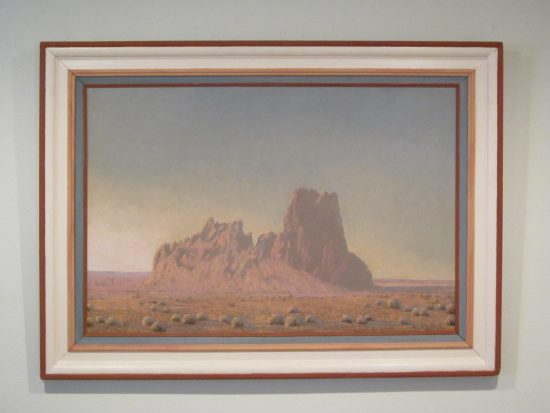 Mike Tatham of Snohomish, Washington inherited a painting from his parents, snowbirds who wintered at the Happy Wanderer trailer park in Indio for years. They picked up a painting by Bonnie Welch, one of a gang of ranch wives who took up painting to pass time on remote homesteads. Welch was married to an Imperial Valley rancher and lived on a 1000 acre ranch near the Salton Sea. If you are interested in the painting, contact Mike at michaeltatham1@gmail.com. 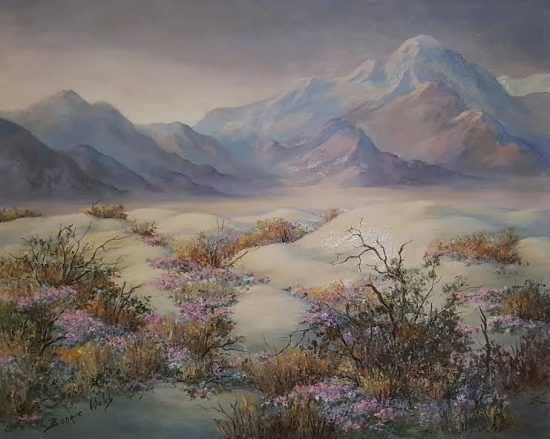