The article–reprinted from Dan and Linda Rohlfing’s Bodega Bay Heritage Gallery newsletter–shows how the Smoketree School‘s strength was based not on individual celebrity but on a web of relationships. The friends spanned the fields of government, journalism, Hollywood, literature, natural sciences and more. You can talk with Kathi Hilton and learn more about this family of desert artists at the upcoming Palm Desert Historical Society exhibit of John and Kathi’s work. 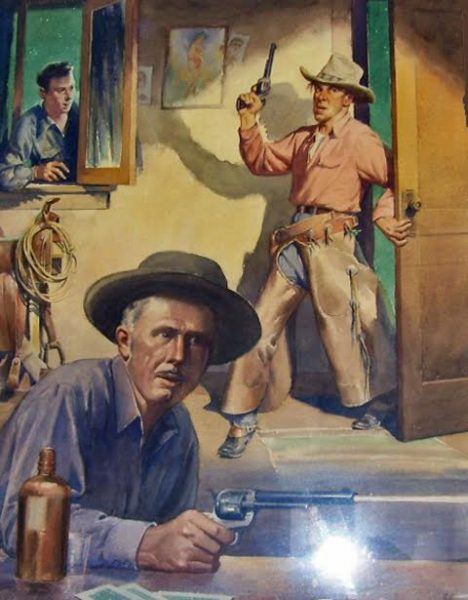 They all knew John Hilton and considered him to be their friend.

Dwight Eisenhower met John Hilton in the late 1940’s at an outdoor art show in Palm Springs. Katherine Ainsworth, author of Hilton’s biography The Man Who Captured Sunshine, wrote: “One Sunday, John had just finished giving a painting demonstration when a quiet, smiling man drew closer to the picture and reached out to touch the surface and left his fingerprint in the wet paint. The man was overcome with embarrassment and apologized profusely. 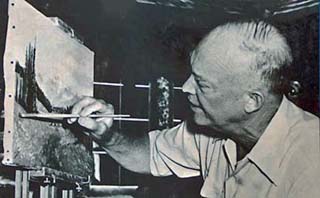 Ike at the easel

John just laughed and said, ‘Think nothing of it, General Eisenhower, that fingerprint makes my picture a collector’s item.'” This meeting resulted in several visits Ike made to John’s home and studio in Twentynine Palms and John’s attending Ike’s Second Inaugural and presenting a painting, Twentynine Palms Oasis, which Ike placed in the Oval Office.

General George Patton came across John Hilton soon after Pearl Harbor. Patton’s officers came upon Hilton in an Indio restaurant where they asked Hilton, known locally as a desert expert, about locations where the General could train tank troops for his Africa Corps. Based on his men’s recommendations, Patton gave Hilton a call and invitation to dinner. The meeting resulted in John Hilton’s accompanying the General on an off-road jeep reconnoitering mission throughout the Mojave Desert. After the trip, Patton asked Hilton to join the Army and be part of his staff in North Africa, but Hilton was already committed to mine optical grade calcite for the War Department. 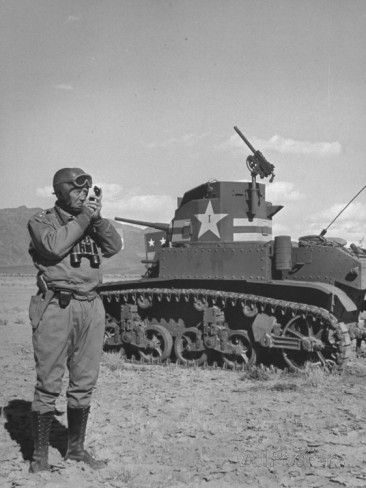 In the months to come, the General visited Hilton at his home on the Salton Sea at Dos Palmas. After the war, Hilton and his son visited a Los Angeles homecoming parade for General Patton. Patton surprised Hilton when he had his driver pull over to the side of the parade route, and personally greeted him. It was the last time Hilton saw his friend. Soon after, Patton returned to Europe and was in a car crash. He died December 21, 1945.

James Cagney disliked the Hollywood lifestyle and preferred the quiet and solitude of his get-away home in Twentynine Palms. It is there he met his friend and painting partner, John W. Hilton. Cagney spent many hours in Hilton’s studio and enjoyed Hilton’s large Olympic sized thermally-heated mineral water swimming pool.

Meanwhile in Los Angeles, John’s daughter Kathi was living with her mother, John’s first wife. One of Kathi’s high school friends was James Cagney’s daughter, and Kathi got to know him in that context. While on a visit to her dad’s Twentynine Palms home, she was surprised to meet “Jimmy” at her dad’s place. 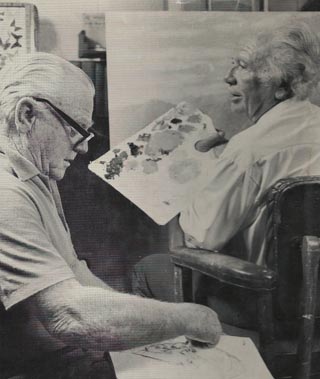 During a later visit, Kathi explained to Jimmy that people often said that that although her paintings were good, they were too much like her father’s. Cagney responded to Kathi in a comforting manner, “Katy my dear, don’t you worry about it. Just paint what’s in your heart.” Kathi says Jimmy’s advice became her mantra the rest of her life.

Howard Hughes was drawn to Hilton and enjoyed his visits to Hilton’s humble home in Thermal precisely because he could feel welcome and at home, a true contrast to Hughes’ plane building responsibilities and demanding social life in Los Angeles. When at John’s house, he was just one of the guests, nothing special and treated as an equal. Kathi Hilton says her father hated putting on airs, and Howard Hughes appreciated that about her father, perhaps more than anything else.

Kathi Hilton fondly remembers several occasions while she was still a little girl. Howard Hughes would fly out to Thermal from Los Angeles and land his airplane on the highway in front of John’s Gem Shop and art gallery and Valerie Jean’s Date Shop. On one particular visit, Howard brought fresh lobster flown in from Maine, a real rarity in Thermal, California during the early 1940’s. To this day, Kathi says lobster is her favorite dish.

Ed Ainsworth served as the City Editor, State Editor, and Chief Editorial Editor of The Los Angeles Times. Like John Hilton, Ainsworth loved the desert. He and his wife Katherine owned a home on the Northeast shore of the Salton Sea and counted the desert artists among their closest friends–including John W. Hilton, Jimmy Swinnerton and Clyde Forsythe. After Ed died, Katherine authored the biography of John W. Hilton, The Man Who Captured Sunshine. 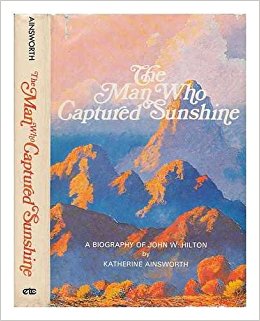 In the 1930’s, John W. Hilton considered himself to be a rank amateur painter, but Katherine Ainsworth quotes John in The Man Who Captured Sunshine, explaining how John got to meet and learn from the great desert painters, especially Maynard Dixon.

“Actually, the desert painters as we know them today had found each other through the rankest amateur, because I had a centrally located place where they could all camp in the yard and cook spaghetti and sing at the top of their lungs.

“I learned a great deal from all of these fellows, but the thought of copying any of their styles never entered my head — or theirs. In the final analysis, they taught me informally about composition, color harmony, drawing, and the handling of paint; but it was the desert itself that taught me to really paint pictures that people would buy and hang on their walls. 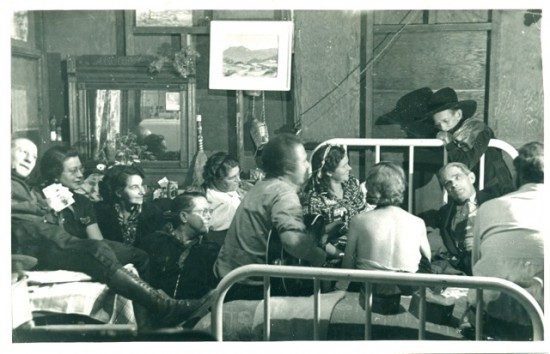 Hilton house party, Thermal, 1930s. Hilton plays guitar, the man in the dark hat is thought to be Maynard Dixon.

“It was on the days that I went out alone that I followed the advice of Maynard Dixon and spent all day painting bushes and throwing the sketches away, and painting clouds and discarding them too. I became familiar with the great, wonderful land around me a piece at a time. A rock at a time, a bush at a time, a mountain or the Salton Sea — each in its turn became mine as I discovered by trial and error how to get it down on a sketch board.” 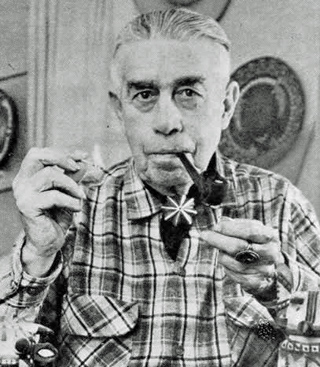 Jimmy Swinnerton was an art school classmate of Maynard Dixon in San Francisco. As very young artists, they were noticed by newspaper editor William Randolph Hearst. Both soon became illustrators for Hearst’s papers, and Jimmy became a pioneering cartoonist. Hearst recruited Swinnerton for his New York papers where he became wildly successful for his strip Little Jimmy and others. While still a young man, Swinnerton received a severe tuberculosis diagnosis and a dire prognosis. Hearst gave Swinnerton a train ticket and sent him to Palm Springs. In time, Jimmy recovered and thrived. In the desert, he maintained his cartooning work, creating a strip of Navajo children living in the Grand Canyon called Canyon Kiddies. But, his main focus was returning to his fine art roots, and became the dean of the California desert school.

When John Hilton met Jimmy Swinnerton, Swinnerton was a generation older than Hilton, a well established artist, a celebrated member of San Francisco’s Bohemian Club. The pair forged an immediate friendship which lasted the rest of their lives. John’s passion for the desert and his interest in art meshed well with Jimmy. John volunteered as Swinnerton’s personal chauffeur, and accompanied Jimmy on many painting excursions, many to Monument Valley. Through Jimmy, John Hilton became friends with Maynard Dixon and Clyde Forsythe. 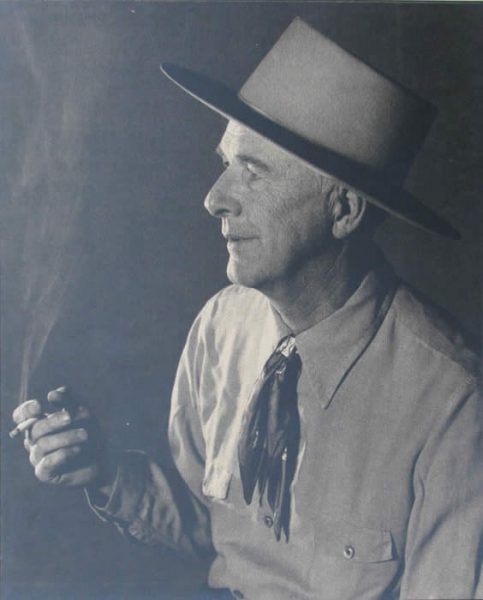 Clyde Forsythe and Norman Rockwell were studio-mates in New York. Clyde was the most senior of the pair and by far the most gregarious. Rockwell, being shy and reserved, drew strength from his more daring partner. It was Clyde Forsythe who goaded, encouraged and enabled Norman Rockwell to submit his portfolio to the Saturday Evening Post.

Clyde interspersed his New York time with the California desert. He made his home in Alhambra on Champion Place, aka “Artists Alley.” His neighbors included Frank Tenney Johnson and Sam Hyde Harris.

Rockwell would visit in the wintertime. On one such occasion, Forsythe introduced Norman to one of his neighbors, an Alhambra school teacher named Mary Barstow who became Rockwell’s second wife. Rockwell enjoyed the company of artists while on his wintertime California trips.

On one occasion, he accompanied Clyde Forsythe on a visit to Thermal, a small desert town southeast of Palm Springs to visit his good friend, John Hilton. The three enjoyed each other’s company and, according to the recollections of Kathi Hilton, the three participated in creating a painting together.

Fechin was well known in his native Russia prior to the revolution. When he came to America, he first achieved success in New York and later moved to Taos, New Mexico. He became known for his portraits of Native Americans, an interest which brought him to meet John W. Hilton.

Katherine Ainsworth writes of their friendship, “Fechin hated to drive, in fact, probably had never learned, and requested John to drive him to scenic places and to the Indians John knew so well. In exchange, Fechin offered to criticize Hilton’s work.”

Hilton dropped everything to be tutored by the great Russian painter. Hilton wrote of Fechin, “He was ruthless and merely said, ‘Sell your cactus, sell your rocks, sell everything you have, but get to work on your art.’ Hard as times were, I had faith in Fechin and did as he ordered.”

“There was a human skull on a desk. For the next three months he said, ‘Don’t paint, just draw.’ He rigged up an electric light on a cord and hung it from the ceiling. ‘Now,’ he said, ‘light the skull from every angle and draw it.

But bring your sketches to me when you think they are worth looking at.’ When I thought a sketch was pretty good, I’d take it up to Fechin’s studio in Palm Springs. He’d take one look and usually tore the drawing up and merely said, ‘Now get back to your drawings.’ He kept saying, ‘Get behind the principle.'”

“For a long time, I didn’t quite know what he meant,” confessed Hilton, “and then one day it dawned on me. He meant that a successful painting had to go beyond the principle; or the mere surface and penetrate down into reality — the thing itself.”

Paintings by Kathi Hilton and John W. Hilton will be featured in an exhibition and sale at the Palm Desert Historical Society March 17-20, 2017. Kathi will be on hand to offer some fascinating first hand stories of the Coachella Valley, and can elaborate on some of the stories told above.

At the Bodega Bay Heritage Gallery website, you can sign up for their newsletter on California art: 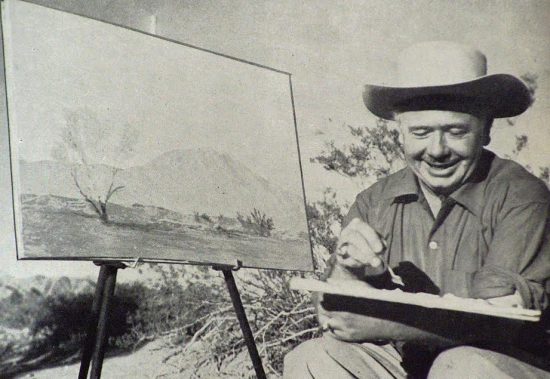 ← Still Life: Eric Merrell Looks at the Orange and Agave
Jim Toenjes: The Path of a Migratory Desert Painter →

5 comments for “John Hilton and the Smoketree Gang”