With Desert X returning to the Valley in 2019, all eyes will be on installations  scaled to Instagram. In the shift to Insta-art, those who work in the enduring  tradition of 20th Century Impressionist painters are easily overlooked. One such “slow artist” who has long explored the power of the local landscape is Elaine Mathews. She keeps returning each fall to Whitewater, Araby Wash and other perennial locations, despite the influx of mirrors and robots. In an acknowledgment of her dedication, she has been chosen as the poster artist for the 37th Annual La Quinta Arts Festival, March 7-10, 2019. 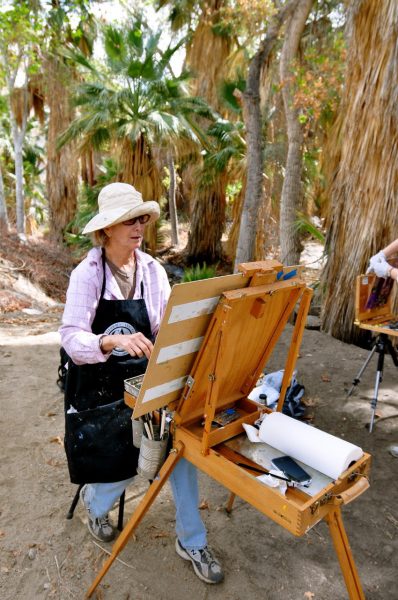 This season, as every season, Mathews also leads the paint-outs for the Desert Art Center and the California Art Club. If you want to tap into the collective wisdom of generations of plein-air painters–visiting sites handed down from artist to artist–there’s no better introduction than Elaine’s paint-outs. Here’s a partial schedule for 2018-2019. For the full list write to: elaineartist@yahoo.com

Another of our most dedicated slow artists is Diane McClary. Like Elaine Mathews, this La Quinta Cove resident has painted the oases and canyons each year, acquiring knowledge that only comes from sustained acquaintance. It comes as sad news for her friends and fans that McClary has suffered recent health problems and now requires an assisted living arrangement. She’s decided to retire from painting. 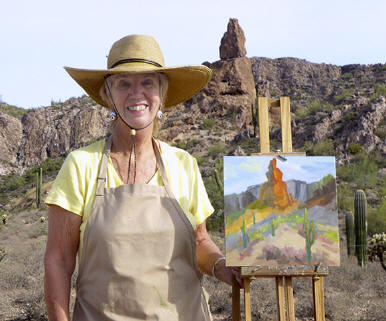 On Sunday, October 7, 2018, from 9 a.m. to 3 p.m., her husband Dan McClary will be selling all of her painting supplies and equipment at their home at 77500 Calle Tecate at the top of the Cove. Dan says that most of her work was plein-air on boards, scenes enhanced later in her studio or repainted on canvas. He has a number of the original boards for sale from $25 to $100, and will be selling more of Diane’s work in the future. For information: DanMc444@aol.com

When the Historical Society of Palm Desert asked Warner V. Graves III to paint a timeline on the wall of their historic firehouse on El Paseo, they pictured an actual line with some small illustrations. But the artist’s imagination took over. The old firehouse location made Warner think of the grand WPA Murals and he went to work. “I chose to do something that was vaguely nostalgic that incorporated lots of the colors you see in the town landscape–desert pinks and earth tones– somewhat in the manner of Tom Lea and his Texas post office murals,” Graves says. “The subtle colors are an attempt not to overwhelm the space and compete with the exhibits.” 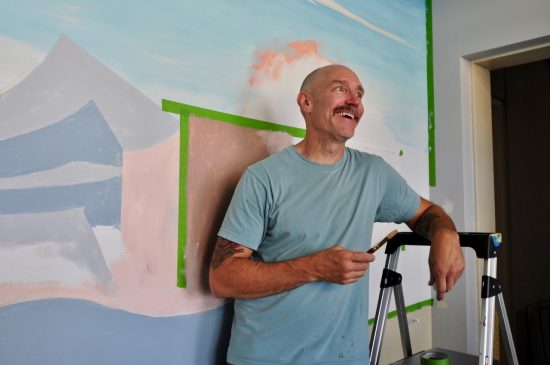 The completed mural is not just a timeline but an attraction in itself. The artist hopes visitors will see a new element each time they visit. As he explains: “The timeline reads left to right beginning with a Cahuilla basket and the iconic geographic backdrop, then various historic sites including the Desert Magazine building, the Wave House and on to more recent structures like the UCR auditorium and the Henderson Community Center. In the center is a burst of various features–the slide and a buoy from the Shadow Mountain Club, Hopalong Cassidy’s hat, citrus, cacti, an issue of Desert Magazine, giraffes from the Living Desert, street signs and the stars from General Patton’s uniform.”

Warner Graves–who divides his time between Cathedral City and the Bay Area–is known as a painter of large scale murals on the walls and ceilings of private residences. His grandmother, Lula Mae Graves, was an early desert photographer in the Salton Sea region. In recent years Graves has taken up desert painting and is returning to the places his grandmother documented almost 100 years ago.

Agnes Pelton has been our local hero but she’s about to leave the nest in a big way as the Phoenix Art Museum retrospective evolves. The latest tour stops include the New Mexico Museum of Art in Santa Fe and the Whitney Museum of American Art in New York. In the next two years, watch for more people to jump on the Pelton bandwagon as humble Cathedral City garners national attention for its early arts scene.

A neighbor and friend of Agnes Pelton, Matille Prigge Seaman–known as Billie– was one of the earliest artists to settle in Cathedral City. A self-portrait of her has surfaced, thanks to Paulina Dellosso. Paulina’s late partner Jeannie Parker was friends with Billie in Cathedral City and inherited some of her paintings, as well as her prized derringer. This revealing self-portrait hung on the wall of Jeannie Parker’s room in a nursing home until her death in February, 2016.

California Women Artists on Display at Pasadena Museum of History

The ever-popular Agnes Pelton also makes an appearance in a new exhibit at the Pasadena Museum of History, inspired by Maurine St. Gauden‘s four-volume work  Emerging from the Shadows; A Survey of Women Artists Working in California, 1860-1960.  The 250 works in the exhibit highlight historically important yet underappreciated artists–a favorite theme of this website, as well. Some of the artists displayed–Pelton, Helen Lundeberg and others–were energized by the desert landscape. The exhibit aims to show “that women could and did contribute to the evolution of style, technique and exploration” in the world of California art. 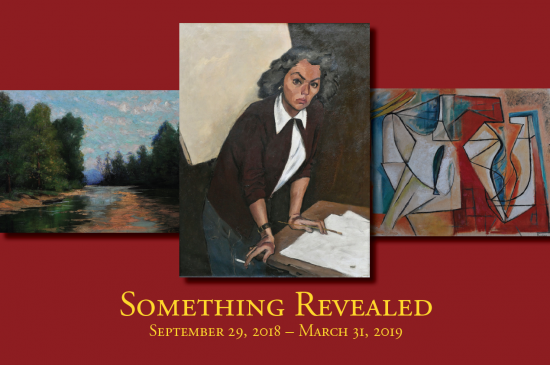 The rock climber and artist Erin Hanson continues to explore the deserts of the Southwest in her newest exhibit Impressions of Big Bend Country at the Museum of the Big Bend in Alpine, Texas. Her expanding desert oeuvre is inspired by hands-on knowledge of the sand and rock as she backpacks, hikes and climbs her way through places like Red Rock Canyon, Monument Valley, Death Valley, Anza Borrego and the Coachella Valley mountains. 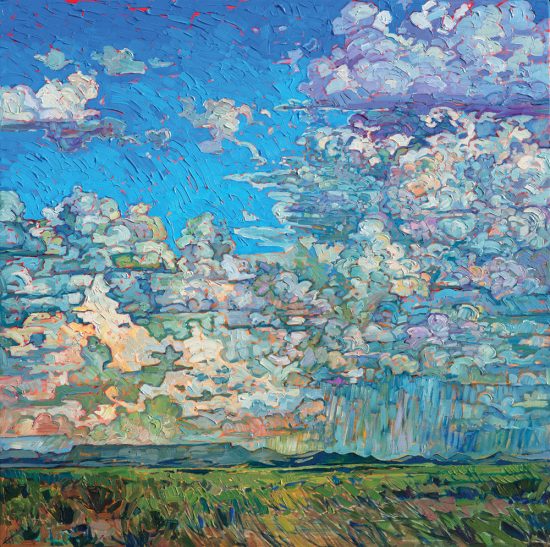 The Big Bend exhibit features blooms, canyons, rivers and big vistas. Hanson is a painter who long ago set her vision on something most of us can’t see and never veered from course. Experience the natural world through the evolved style the artist calls Open Expressionism.

Impressions of Big Bend Country is on display through December 16th, 2018.

John Bascom is a tireless publicist for his late father, rodeo cowboy and cowboy artist Earl Bascom. He’s currently lobbying for a last minute save for the historic Victorville ranch–dating to 1872–where his father once lived. The ranch is due to be destroyed October 11th, 2018 in a fire-training exercise. Fred Bosch once owned the ranch at 15669 Stoddard Wells Road. He and Albert Einstein were friends in Germany and Einstein visited the Victorville ranch to sunbathe and swim in the reservoir. 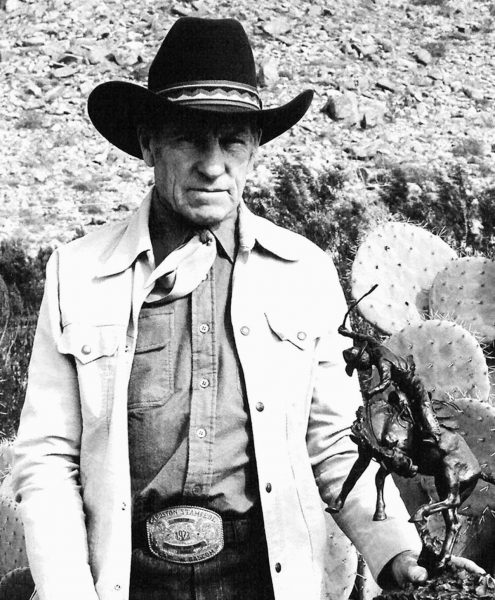 Well-known desert artist and cowboy Bill Bender lived and worked on the ranch, along with Earl Bascom, another cowboy artist best known for his sculptures. In 1975, after Bascom purchased the property and set up his painting and sculpture studios there, it became known as the Bascom Ranch.

In recent years the property has become run-down and abandoned. The owner agreed to a controlled burn of the structures to bring the property into compliance, according to the Victorville Daily Press. If you can help Bascom (a former president of the Mohahve Historical Society) save his father’s historic ranch at the last minute, contact: bascomranch2000@yahoo.com

Chuck Caplinger, an artist recently featured here, designed the poster for this month’s Pioneer Days Celebration in Twentynine Palms. His painting of a tool-laden Bill McHaney is from his series on Hi-Desert settlers, miners and Chemehuevi Indians. The painting will be featured in the exhibit Into the Wild–artists interpreting adventures in the desert wilderness–at the Twentynine Palms Visitor Center and Art Gallery. Posters and buttons of the Bill McHaney painting will be available at the visitor center during Pioneer Days (October 18-21, 2018). Grab your own Chuck Caplinger poster to honor this desert artist pioneer as well as early basin settlers. 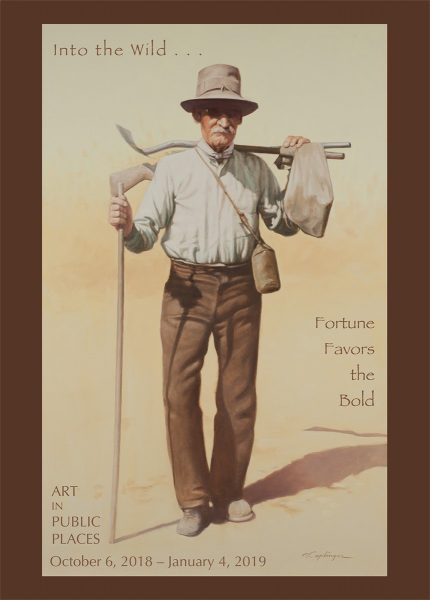