For artists new to the desert and looking for a guide to its essence, track down a copy of J. Smeaton Chase’s 1919 volume California Desert Trails. The English-born Chase traveled with early Palm Springs artist Carl Eytel; his words have inspired contemporary desert painters Terry Masters, Eric Merrell and others. As an intro to Chase, Jim Develyn’s new blog highlights passages from his work. (Chase also wrote about Yosemite and the California Coast.) 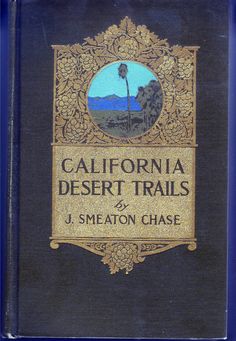 Develyn says he wants to “put this wonderful writer’s words in front of more people”. Though I’ve spent hours with California Desert Trails in the past, I was arrested again by the beauty of the passages Jim has selected.  Chase is to the California desert as John Muir is to the Sierra. “Such joy of spirit should be shared,” as Jim says. He is looking for background on Chase for a book project, so if you know more, write to him at: wcasrls@zoho.com

Photographer and artist Kim Stringfellow, well-known in Joshua Tree circles, will soon be well-represented at Yale, as 100 of her photographs have been acquired by the Beinecke Rare Book and Manuscript Library. 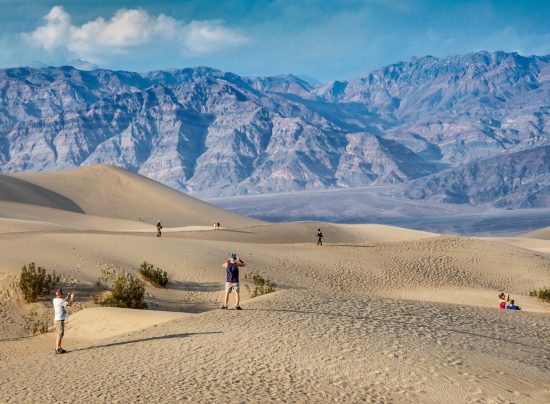 Stringfellow explores the environmental and cultural landscape of the desert in a variety of media. Along with her ongoing Mojave Project, she has written books on jackrabbit homesteads and the Salton Sea. Her photos are a fitting addition to Yale’s historical collection of Western photography which includes pioneers Timothy O’Sullivan and William Henry Jackson.

Stringfellow’s photos will be included in  a 2018 exhibition and accompanying book, Eyes on the West, organized by George Miles, curator of Western Americana at the Beinecke Library.

I dropped into Raven’s bookshop on a recent drive to 29 Palms and paused to admire an intricate old map on the wall. It was dense with details only a desert insider could know–a perfect specimen of cartography as art. Store owner Patty O’Toole put me in touch with Chekoya Dreamhawk, seller of the maps. Chekoya told me a friend of hers had found the maps in a motor home outside a former real estate office in Joshua Tree. The office had once belonged to Col. E.B. Moore, the maker of the maps.

Moore was a major booster of the 1940s homestead movement in the Morongo Basin. He called himself a “land locator” and touted the benefits of the desert to health-seekers and veterans with lung problems. To promote sales of the jackrabbit homestead cabins (reinhabited by today’s LA transplants) he drew his beckoning map. In addition to the Joshua Tree area map, Chekoya has mining maps and various other samples of E.B. Moore’s work.

To purchase a copy of the map ($25 and $50) contact: Chekoya@gmail.com or stop by Raven’s bookstore. Leave time to hunt through the bookstore’s catacombs full of great finds.

Rare paintings by Indian Wells artist Carl Bray were lost in the Santa Rosa fire in October, 2017, when the home of Bray’s daughter Sylvia Bray burned to the ground. “The loss of Dad’s paintings was probably the biggest loss for me,” Sylvia writes. “He had given us one of his old 1957 paintings for our wedding gift and I also had his only watercolor, a beautiful desert scene. I never saw another watercolor by him and found it by fluke in his studio one time.”

Sylvia and her husband Bernardo Larque will be building a new home on their property.  Indian Wells Historic Preservation Foundation president Adele Ruxton has offered the couple paint brushes and paintings from the Foundation’s Carl Bray collection to help replace some of what they’ve lost. 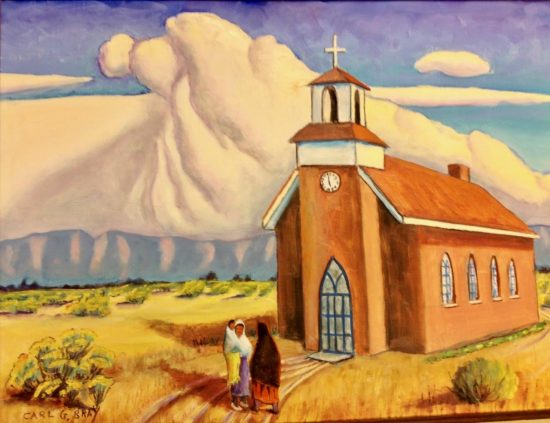 A Carl Bray painting for sale at the Historical Society of Palm Desert.

For readers in search of your own Bray classics, the Historical Society of Palm Desert currently has more than a dozen Carl Bray paintings for sale (prices from $400 to $1200). These are examples of Carl’s late work before he died in 2011.

Along with studying J. Smeaton Chase, artists new to the desert are advised to go along on the Desert Art Center’s traditional paint-outs. You’ll be painting in the same locations beloved by artists such as R. Brownell McGrew, Agnes Pelton and Jimmy Swinnerton. All were members of the Desert Art Center, and all handed down their favorite places to newer members–and on to you today.

The paint-outs are free-form affairs. You can talk with experienced local painters who know all the trails and canyons, or go off by yourself and sketch in a lonely wash. Artist Elaine Mathews leads the paint-outs for both the Desert Art Center and the California Art Club. She is your best source for local plein air location scouting. Elaine’s gang will show their work at the Desert Art Center in February. Dates for 2017-2018 include:

May 5th, Top of the Tram

Well-known desert painter and instructor Mark Kerckhoff has embarked on a series of pen-and-ink drawings. While he’s best known for powerful color and brush work, the drawings are orderly and somehow restful. Asked to comment on this new path, he said: “I’ve always loved drawing but in all my career, have never taken the time to just do a drawing. Scratching something onto the canvas, yes, but never just drawing for drawing’s sake. So here I am. My wife tells me to keep the paintings going, but I never listen.” 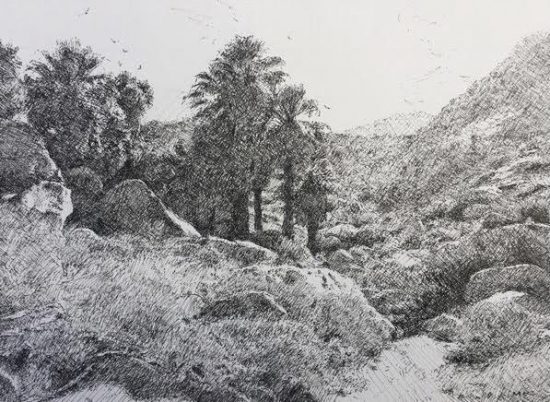 Old Trail to the Indian Canyons, by Mark Kerckhoff

Through November 26th 2017, the 29 Palms Gallery features contrasting artists. Doug Dolde has been photographing the American West since 2001 and here features his painterly desert photos, or Mojave Mojo as the show is called.

Down the hall is Paula Izydorek and Ingrained, her acrylic on birchwood abstract compositions. The Cleveland-based contemporary painter is working on a new body of paintings informed by visits to Joshua Tree.

This is the original gallery in the Morongo Basin and has lots of stories within its walls. It’s always worth a visit if you are in 29 Palms. Doug Dolde also exhibits his work at the Rancho Mirage Public Library through Labor Day, 2017.

Jamie Caffrey, restorer of the John Hilton house in 29 Palms, has posted new photos of the esteemed artist’s home and its prominent visitors in the early days, courtesy of Rick MacGillivary, Barbara Hilton’s son. For more photos and updates on Caffrey’s restoration progress, visit: https://www.instagram.com/johnhiltonhouse/ 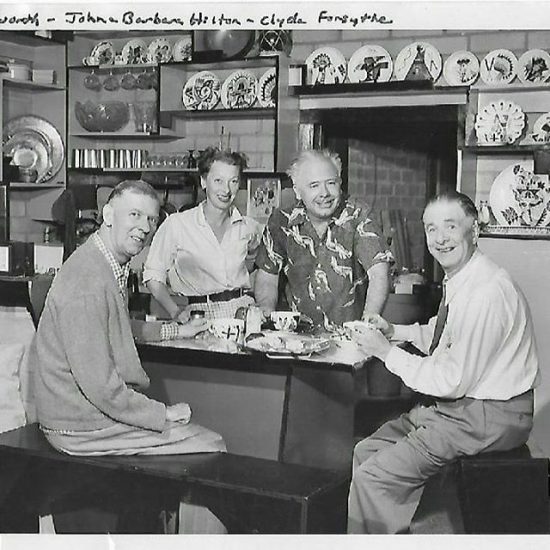 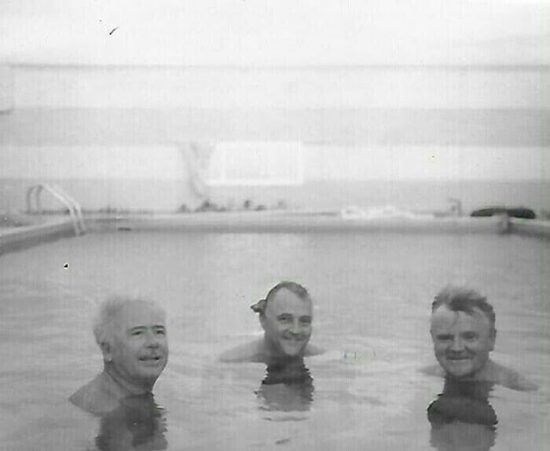 CREATE Center for the Arts in Palm Desert presents a memorial exhibit devoted to the work of Susan Smith Evans, who died in March, 2017. The exhibit, When Chuckwallas Dream, runs through November 17, 2017, with a closing reception Friday, November 17, 5-7 pm. As profiled recently on this website, Evans was one of the Valley’s most influential artists and teachers. Proceeds from sales of her paintings benefit the Susan Smith Evans Memorial Scholarship Fund. 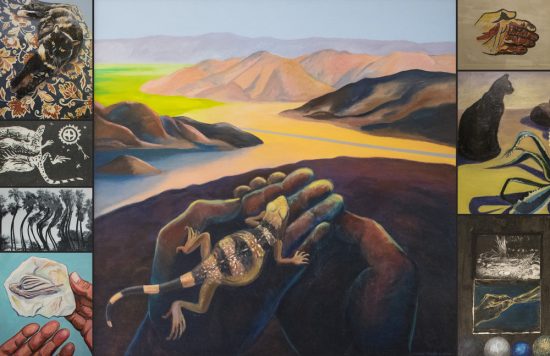