Any Palm Springs visitor can board a bus and tour Liberace’s pad. With only a little more effort, you can see the view that inspired mystical visions from Agnes Pelton’s back porch or the Cathedral City home where R. Brownell McGrew came to love the desert so much he was later dubbed Rembrandt Under a Smoketree. 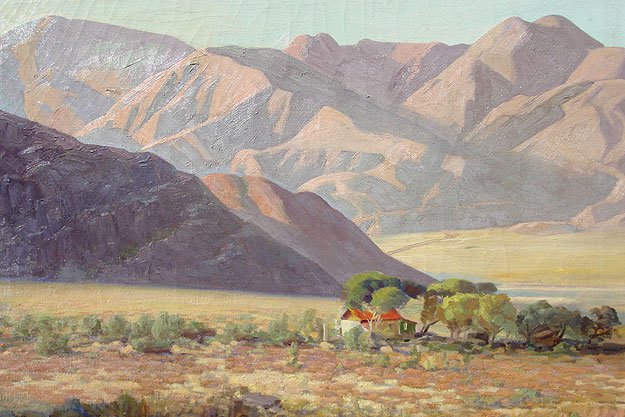 Axel Linus’ painting of his Snow Creek home and studio, 1941

Some of California’s greatest artists once lived in the Coachella Valley. More and more, art lovers are recognizing the power artists’ former homes and environs hold in telling the story of American art. As Jamie Wyeth, son of Andrew Wyeth and grandson of N.C. Wyeth, told Preservation magazine in 2011, “[Historic homesteads] absorb the lives of the people who’ve lived and worked in them. You can’t help but learn when you visit.”

If Hudson River and Taos artists are better known than our homegrown painters, that’s partly because the Coachella Valley just missed its chance at being identified as a major arts center. The desert attracted major artists in the late 1920s when something flashier came along: the movies. Hollywood overshadowed — but did not erase — the booming art scene. Thus, we have celebrity home tours and not artist home tours.

When you follow the Smoketree Art Trail, you’ll see the area was as packed with talent as Laguna Beach, Santa Fe, or Carmel. There are no brochures or podcasts; you’ll have to supply the imagination to envision what it was like before today’s residential and commercial development. In some cases, the structures have been razed (John Hilton’s Art and Gem Shop, for instance), but the sites retain their magic.

The Smoketree Art Trail makes a large loop starting at Snow Creek and proceeding through the valley to Thermal and the Salton Sea, returning by way of Desert Hot Springs. The houses cluster in places with the most pleasing geography. Snow Creek — where Axel Linus lived and died — was and is a favorite of artists because of its world-class view of San Jacinto’s north face. Cathedral City was a favorite locale because of its expansive predevelopment views.

Enthusiasts are honing in on an exact address for Sam Hyde Harris in Cathedral City. And did Clyde Forsythe ever build a home on his acreage near Coral Mountain in La Quinta? Many undiscovered desert artists are being written back into history, and contemporary desert artists may one day join them on the map.

Bear in mind that many of these sites are private residences, so please pick up the artists’ vibes from a respectful distance.

Born in Sweden, Linus studied at art academies in Stockholm and Paris. He had a studio and home in Snow Creek for more than 40 years, until his death in 1980.

Thall was an Abstract Expressionist painter in New York; he worked with Willem de Kooning and Arshile Gorky. Leaving the East Coast scene before it became an international sensation, he moved to Snow Creek in 1969 and died there in 1983.

Grimm had a studio in downtown Palm Springs at 428 N. Palm Canyon Drive (the building is gone now). He built this ranch house in 1935. Grimm painted Hollywood movie sets before becoming a desert painter known for his mastery of sunlight and rolling clouds. 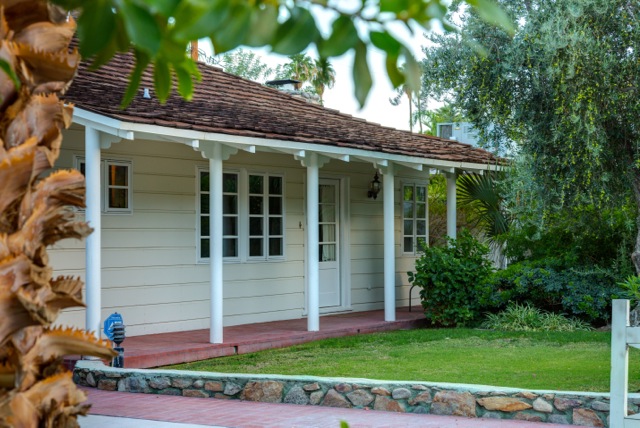 One of Palm Springs’ earliest painters, Frost is the subject of a forthcoming book from the Irvine Museum. The classic French Impressionist had a studio at Nellie Coffman’s Desert Inn on the northwest corner of this crossroads. Frost died of tuberculosis at age 46.

The most important California art dealer of the day, Stendahl spent winters in the Movie Colony home later known as the Cary Grant house. Many major artists were lured to the desert by the Stendahl connection. 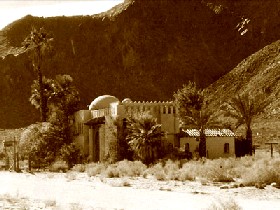 Burnham was better known as a patron to other artists. His circa-1927 Spanish compound is up against the hillside by the Tennis Club. It’s now a vacation rental known as Colony 29. Nicolai Fechin lived in an adjoining studio when he was in town.

Clark had a home and studio in the complex that is now part of Colony 29, making this hillside a nexus of local art history. A friend of Guy Rose, Clark was a masterful Impressionist known for murals and desert scenes. Living here in the early 1920s, he was lulled to sleep at night by the sound of water in Tahquitz Creek. The creek has been diverted and no longer sings to artists at this location.

The work of this Russian-born painter known for his portraits and Southwest landscapes brings record prices at auctions today. His former home in Taos now houses the Taos Art Museum. One of his residences in the 1920s and ’30s was a studio adjacent to the John Burnham house.

Best known as a Palm Springs photographer, Willard also was a desert landscape painter. A resident beginning in 1922, he lived in the Spanish house that is now part of Moorten Botanical Garden.

This hermit artist embodied the pure spirit of nomadic desert painters and inspired just about everyone who came after him. Arriving in town in 1903, he lived in a shack above the pool area where the Tennis Club and Spencer’s restaurant are today. 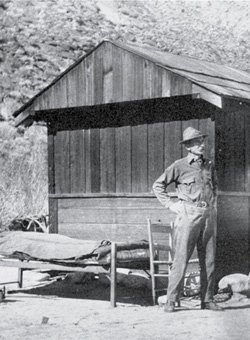 DeBrabant lived in this 1929 Spanish colonial revival in the Movie Colony. She and her brother Marius were wealthy collectors and art patrons. Paul Grimm created a painting of the courtyard. Hanson Puthuff set up his easel in the living room. 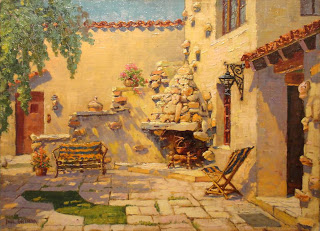 Desert artist and former art director of Palm Springs Villager magazine (predecessor to Palm Springs Life), Samuelson was ahead of the curve locally in experimenting with abstraction in landscape. His widow, Marian Samuelson, recently moved out of the house.

The popular Western artist known for her paintings of the Butterfield stagecoach sometimes signed her work “Harvey Day.” Around 1950, she lived in a cabin behind a defunct Cathedral City date shack called the Pink Burro. According to her daughter, Judy Morris, Reed painted a mural around the walls of the restaurant. The Pink Burro was in the neighborhood where the Desert IMAX Theatre and City Hall are today.

The transcendent landscape painter is often compared to Georgia O’Keeffe. She came to town in 1932, when Cathedral City only had 100 residents, and had this home built for her. The address was originally on E street. Her home was recently purchased by L.A. photographers Peter Palladino and Simeon Den, who are working to preserve the home and Pelton’s legacy. 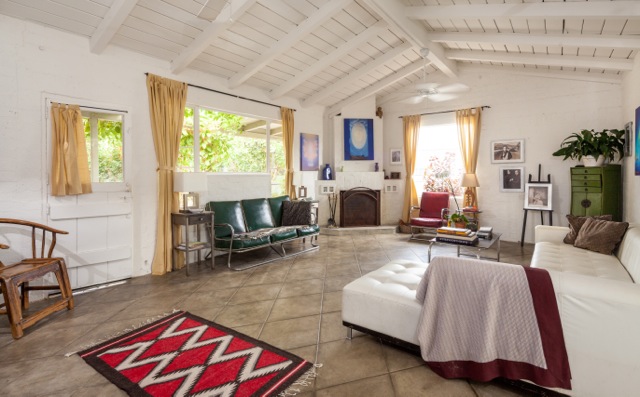 This highly valued Western artist lived here in the 1950s. Known for his nearly psychedelic renderings of Navajo Indians, the artist later lived in La Quinta. McGrew designed and built the studio with a long north-facing window behind the house. At first, he preferred to paint the Sierras and didn’t like the desert at all. But his time here changed that.

The celebrated California painter often visited Cathedral City in the 1940s and stayed at a resort called Svenska. His later desert paintings were influenced by his friend Jimmy Swinnerton. His biographer, Maurine St. Gaudens, says Harris had a home in Cathedral City. 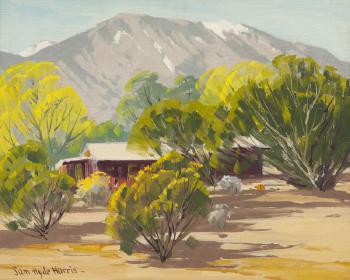 The most famous of the desert artists, Swinnerton came to the region to recuperate from tuberculosis. In 1907, he lived at the Sidewinder Shebang, a cottage at Nellie Coffman’s Desert Inn, and spent his last years in this house, puttering in the rock garden. He died in Palm Desert in 1974.

The desert and cowboy artist (also a working cowboy) camped under an Ironwood tree where The Living Desert Zoo & Botanical Garden is today, while his teacher and boss (Bender was Jimmy Swinnerton’s chauffeur) stayed in hotels. Bender still paints at his home in Victorville.

The desert’s favorite folk artist and self-proclaimed Painter of the Smoketree built his home by hand with railroad ties and stones from Berdoo Canyon. The city of Indian Wells demolished the popular roadside attraction in 2010, leaving nothing but a wide spot in the lawn beside the bike path. 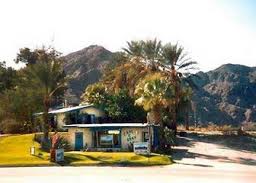 This nomadic artist sold his work from the back of his camper, often parked along Highway 111 near Point Happy. He was a friend of John Hilton and died of a lingering illness in the guest room at Carl Bray’s Indian Wells gallery.

While recovering from diphtheria, Sayre stayed for long periods on the date farm belonging to his cousin Ben Laflin. The location is the old Laflin ranch, where Oasis Date Gardens is today. From the ranch, Sayre made trips to the Salton Sea, a frequent subject of his paintings. The house where Sayre stayed still stands.

Hilton ran an art and gem shop across from Valerie Jean Dates at Valerie Jean Corners. The art shop has been torn down; but if you look across the street from Valerie Jean (still standing but closed to business), you can imagine the days when this out-of-the-way corner hosted some of the biggest artists in California, including Clyde Forsythe, Jimmy Swinnerton, and Maynard Dixon.

Los Angeles Times’ newspaperman Ed Ainsworth (Painters of the Desert author) was the figurehead of an artists’ salon along the north shore of the Salton Sea. John Hilton, Jimmy Swinnerton, Clyde Forsythe, Orpha Klinker, Bill Bender, and others came to dance by tiki lights and soak in nearby hot springs. Some of the houses in Ainsworth’s development are still here.

Yerxa is less known as an artist than as a homesteader (he came to Desert Hot Springs in 1913). But he started drawing as a boy and later studied at the Academie Julian in Paris (in 1925). Yerxa began building this Hopi-inspired pueblo in 1941 and continued working on it until his death in 1965. Now open to the public as Cabot’s Pueblo Museum, this site is listed on the National Register of Historic Places.

This Western artist purchased land next to Yerxa’s and camped there with his family. Daughter Ginny Bohannan remembers going out looking for UFOs with Yerxa and his wife, Portia. Procter is known for his paintings of cowboys, Navajo Indians, and Western landscapes.